5 Environmental Triumphs Over Trump in 2017 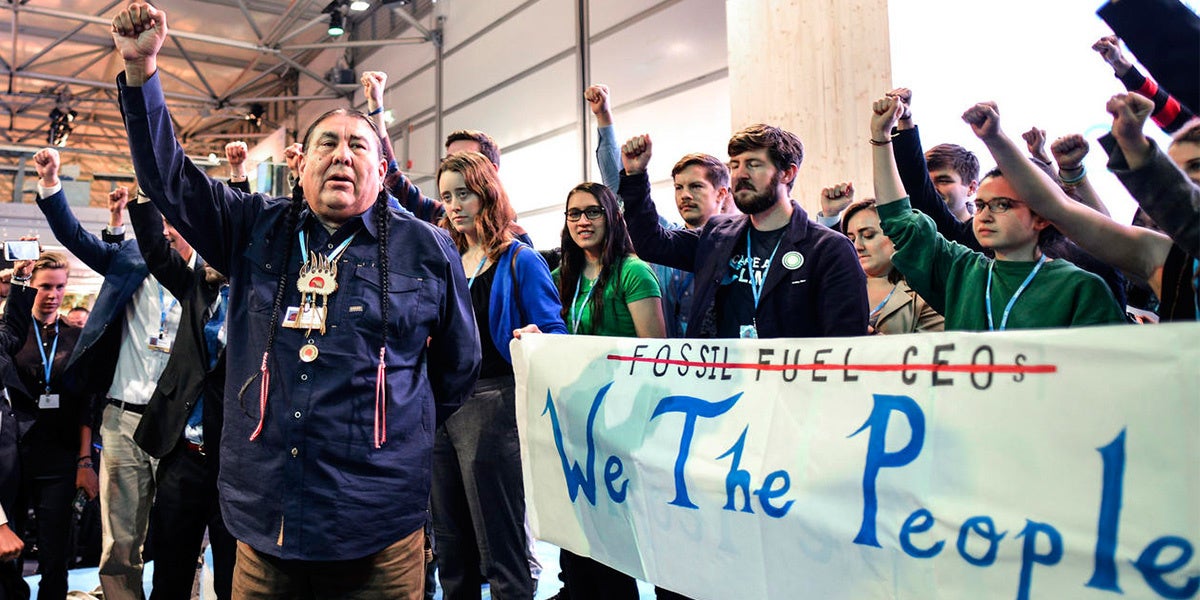 From his flagrant dismissal of the scientific consensus on manmade climate change to his eagerness to see treasured landscapes degraded by extractive industries, Trump‘s disregard for clean air, drinkable water and natural heritage has been relentless during the first year of his presidency. Not only are his anti-environmental actions wrong, but many are illegal. And businesses, politicians, nonprofit groups and ordinary citizens alike have stepped up to fight his toxic agenda.

In the name of making spirits bright, here are five times Trump’s environmental actions didn’t succeed at trashing planet Earth in the past year.

1. The Failure: Abandoning the Social Cost of Carbon

The social cost of carbon, or SCC, is a calculation that estimates the long-term economic impact of carbon dioxide emissions. It’s a highly significant number—lawmakers use the SCC to figure out whether rules that tackle pollution are worth the investment. In 2009, the Obama administration established a group called the Interagency Working Group on the Social Cost of Greenhouse Gases that eventually set the cost of one ton of CO2 emissions at $41, which is why the former president estimated the Clean Power Plan would ultimately yield up to $54 billion a year in health and environmental benefits.

Just a couple of months after taking Obama’s spot in the White House, Trump disbanded the Interagency Working Group with his Promoting Energy Independence and Economic Growth Executive Order. He said its findings were “no longer representative of governmental policy.” Trump decided the SCC should be calculated differently, with each government agency determining its own dollar figure. This could mean interagency inconsistencies as well as an increased emphasis on the domestic, rather than global, impact of CO2—pivots that would make the emissions seem far less costly than they actually are. The Trump U.S. Environmental Protection Agency (EPA) proposal to repeal the Clean Power Plan, for example, calculated that the SCC would be just $1 to $6 by 2020.

But some courts find fault with this plan. In cases across the country, judges are ruling that the SCC is necessary, and fossil fuel projects like coal mines and pipelines are now tied up as a direct result of the administration’s failure to consider the climate costs.

Even before Inauguration Day, scientists began worrying that important information on climate change could soon disappear from government websites. Multiple groups staged hackathons to preserve data and webpages from the EPA as well as the National Oceanic and Atmospheric Administration in accessible places like the Internet Archive and DataRefuge.

So when information on—and even references to—climate change did indeed begin disappearing from government websites shortly after Trump’s inauguration, scientists and engaged citizens were ready. Groups like the Environmental Data & Governance Initiative have been watching the administration like hawks, monitoring changes to government agencies and keeping public environmental data, well, public, even as the current administration is determined not to.

In 2015, the Obama administration tightened the national standard for ground-level ozone, a pollutant that causes serious health problems, bringing it down to 70 parts per billion from 75 ppb. States had until Oct. 1 of this year to submit their air-quality data, but EPA Administrator Scott Pruitt attempted to delay that deadline. Maybe he thought that no one would notice? Fat chance. After 16 attorneys general sued, Pruitt reversed course, stating, “We take deadlines seriously.”

But Oct. 1 has come and gone, and (surprise!) the EPA has yet to declare which parts of the country are not in compliance with the new rule. So in December, the lawsuits came again to force the agency into action, this time from 10 health and environmental groups including NRDC.

4. The Failure: Touting Coal at the U.N. Climate Conference

When 17,000 people representing 195 countries met in Bonn, Germany, in November to discuss concrete steps for fighting climate change, the tone-deaf Trump administration decided it was the perfect time to sing coal’s praises. But its presentation, given by industry heads and titled “The Role of Cleaner and More Efficient Fossil Fuels and Nuclear Power in Climate Mitigation,” was disrupted by a song, as hundreds of protestors belted out an anti-coal version of “God Bless the U.S.A.” that went viral.

5. The Failure: Using U.S. Cities and Businesses to Defend the U.S. Withdrawal from the Paris Agreement

Trump proudly announced in June that he would turn his back on the entire world and withdraw from the Paris climate agreement. His reason? He said it was for the good of the country’s businesses, cities and citizens. “I was elected to represent the citizens of Pittsburgh, not Paris,” he said. 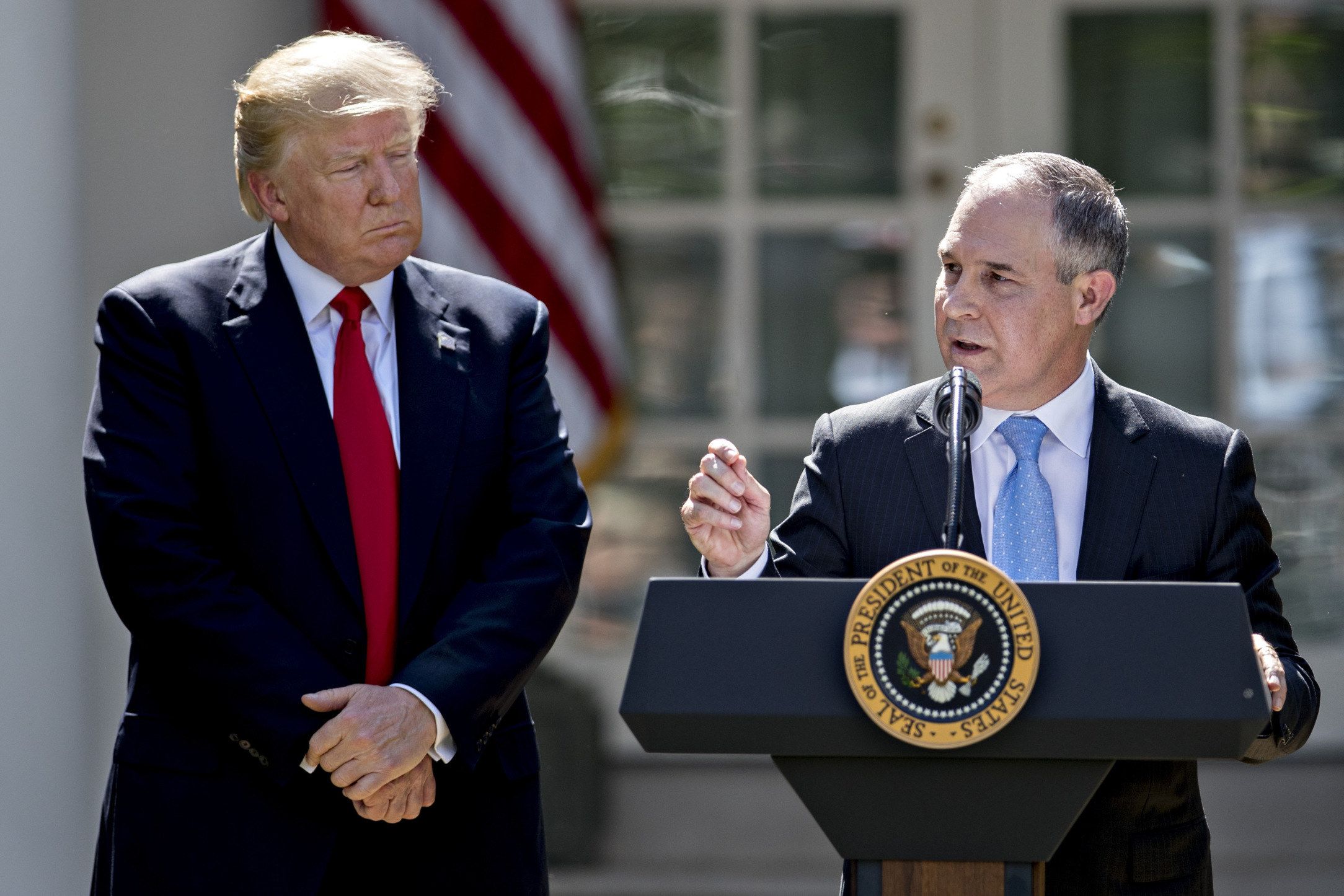 Pittsburgh’s mayor, Bill Peduto, was quick to issue a rebuttal in Trump’s preferred language (Tweet), saying he would follow the Paris agreement’s guidelines. He and Parisian Mayor Anne Hidalgo then doubled down on their joint commitment to climate action in a New York Times op-ed titled “We Have Our Own Climate Deal.”

As the Mayor of Pittsburgh, I can assure you that we will follow the guidelines of the Paris Agreement for our people, our economy & future. https://t.co/3znXGTcd8C

Perhaps Trump forgot that all the groups he mentioned in his withdrawal announcement can speak for themselves, and plenty of them loudly and plainly rebuked his stance by saying, “We Are Still In.” A coalition of businesses, cities, states, universities, indigenous peoples and faith groups that are committed to upholding the agreement is 2,500 leaders strong and growing.

Former New York City Mayor Michael Bloomberg and California Gov. Jerry Brown went a step further and launched the America’s Pledge initiative, which unites private and public sector leaders devoted to reducing carbon emissions so that the U.S. can still deliver on the goals of the Paris agreement. The coalition recently presented a report to United Nations Framework Convention on Climate Change’s executive secretary, Patricia Espinosa, showing that if these U.S. institutions still committed to the Paris agreement were a country, its economy would be the third-largest in the world.

They can’t make up for the absence of federal leadership, but they won’t stand on the sidelines while our Denier in Chief attempts to trump decades of hard-won climate progress. Make America Great Again? Challenge accepted.