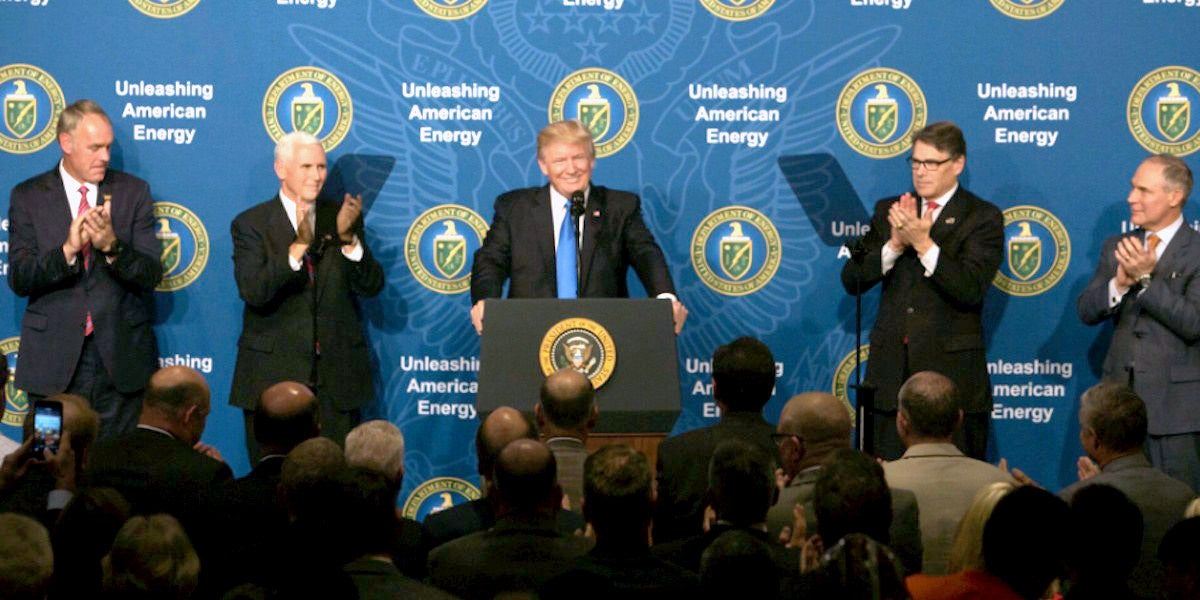 President Donald Trump has approved the construction of a new U.S.-Mexico pipeline that will go “right under” the controversial border wall.

According to The Hill, the New Burgos Pipeline will carry up to 108,000 barrels per day of refined petroleum products per day and cross the border between McAllen, Texas and Reynosa, Tamaulipas, Mexico. The project is a joint venture between NuStar Energy LP and PMI, an affiliate of Mexico’s state-owned oil and gas company Petroléos Mexicanos.

“[The pipeline] will further boost American energy exports, and that will go right under the wall, right?” Trump said, as he glanced over to his cabinet members and made a swooping motion underneath the imaginary structure with his arm. Some in the audience clapped and laughed at the gesture.

“We have to dig down a little deeper under that section,” he added.

Trump’s 17-minute speech centered around the theme of America’s “energy dominance.” But as Newsweek reported, he did not once mention the rapidly growing renewable energy sector, not even his now-infamous “solar” border wall proposal. Rather, he touted “clean, beautiful coal,” reducing restrictions on natural gas, and expanding offshore oil and gas development. He dismissed concerns about fossil fuels as “a big beautiful myth” and “fake.”

Additionally, POTUS touted his executive order to push the Keystone XL and Dakota Access pipelines forward while falsely claiming that there was no opposition to his decision. He underscored his decision to withdraw the U.S. from the “one-sided” Paris climate agreement.

Environmental groups have spoken out against Trump’s speech this week as well as his administration’s intention to unleash more fossil fuels.

“The ‘energy dominance’ tagline should be called out for what it is: another manifestation of the president’s misogynistic, hyper-masculine, abusive outlook on the world,” David Turnbull, campaigns director at Oil Change International said. “It reveals an attitude toward our environment and energy policy that would destroy communities and our climate in order to feed his own desire to feel powerful over others.”

“Want to know what Trump’s idea of energy dominance looks like? Look no further than his crony cabinet,” Turnbull continued. “Thanks to this administration, Washington is more dominated by Big Oil, Gas and Coal executives and their shills than ever—and they’re having their way with American democracy. Someone should put the leash back on Donald Trump, while the rest of us keep working to make America the leader it needs to be in renewable energy innovation and job creation.”

The Center for Biological Diversity criticized Trump’s plans to expand offshore drilling, which replaces the Obama administration’s plans to protect the Atlantic, Pacific and Arctic oceans.

“Trump just planted a big ‘for sale’ sign in America’s oceans. But oil executives who think they’ll have a free pass to drill at will need to know that coastal communities are fighting back,” said Kristen Monsell, an attorney with the Center for Biological Diversity. “Selling off our seas for short-term profits is a bad deal for Americans, wildlife and our changing climate.”

“Expanding drilling off our shores would put our coastal communities’ health, economic well-being, and environment at risk, and continue to ignore the impacts of climate change across the nation,” Moffitt said. “Opposition to this administration’s polluter-friendly agenda will only grow as they take yet another step to prioritize oil and gas industry profits over the health and safety of the American people.”

Greenpeace USA’s senior research specialist Tim Donaghy said, “Trump is kidding himself if he thinks opening up the Arctic and Atlantic to offshore drilling is going to be easy.”

“People in this country demanded that President Obama protect public lands and waters from offshore oil and gas development, and communities from Alaska to South Carolina will do it again,” Donaghy continued. “Research shows that expanding offshore oil drilling will lead to increased global greenhouse gas emissions and higher costs that will be borne by Americans for decades to come.”

“A better vision for American energy exists, but it isn’t coming from the White House,” she said. “Climate leadership and the transition to renewable energy will come from the local and state level, and we must continue to pressure elected officials around the country to commit to a transition to a clean energy future, starting now.”