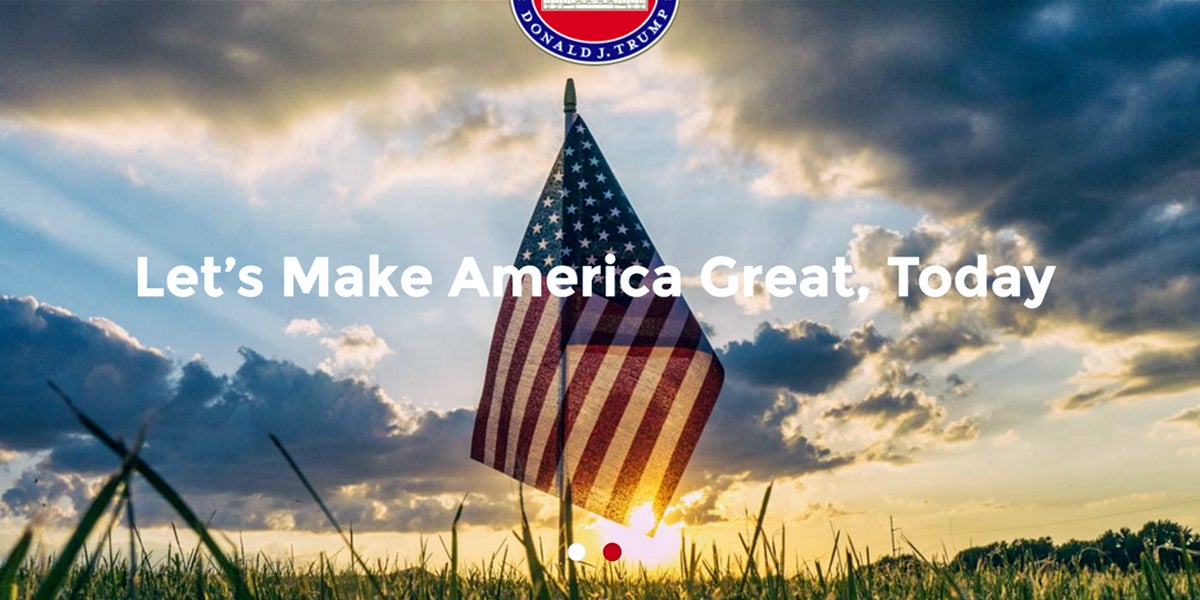 If anyone has any questions left about what Donald Trump’s energy plans will do to the climate, just read his brand new website GreatAgain.gov for clarity.

Click on “Energy Independence,” sit back and start reading. It’s short, succinct and devastatingly to the point:

“The Trump Administration will make America energy independent. Our energy policies will make full use of our domestic energy sources, including traditional and renewable energy sources. America will unleash an energy revolution that will transform us into a net energy exporter, leading to the creation of millions of new jobs, while protecting the country’s most valuable resources—our clean air, clean water, and natural habitats. America is sitting on a treasure trove of untapped energy. In fact, America possesses more combined coal, oil, and natural gas resources than any other nation on Earth. These resources represent trillions of dollars in economic output and countless American jobs, particularly for the poorest Americans.

“Rather than continuing the current path to undermine and block America’s fossil fuel producers, the Trump Administration will encourage the production of these resources by opening onshore and offshore leasing on federal lands and waters. We will streamline the permitting process for all energy projects, including the billions of dollars in projects held up by President Obama, and rescind the job-destroying executive actions under his Administration. We will end the war on coal, and rescind the coal mining lease moratorium, the excessive Interior Department stream rule, and conduct a top-down review of all anti-coal regulations issued by the Obama Administration. We will eliminate the highly invasive ‘Waters of the US’ rule, and scrap the $5 trillion dollar Obama-Clinton Climate Action Plan and the Clean Power Plan and prevent these unilateral plans from increasing monthly electric bills by double-digits without any measurable effect on Earth’s climate. Energy is the lifeblood of modern society.

“It is the industry that fuels all other industries. We will lift the restrictions on American energy, and allow this wealth to pour into our communities. It’s all upside: more jobs, more revenues, more wealth, higher wages, and lower energy prices.

“The Trump Administration is firmly committed to conserving our wonderful natural resources and beautiful natural habitats. America’s environmental agenda will be guided by true specialists in conservation, not those with radical political agendas. We will refocus the EPA on its core mission of ensuring clean air, and clean, safe drinking water for all Americans. It will be a future of conservation, of prosperity, and of great success.”

With his climate denying cabinet—including Exxon CEO Rex Tillerson as Secretary of State, Rick Perry for Secretary of Energy, and Cathy McMorris Rodgers or U.S. Rep. Ryan Zinke, R-MT, in the running for Secretary of Interior—and a fossil-fuel friendly U.S. House and Senate, it is no understatement to say the Trump is preparing a fossil fuel takeover of the U.S. economy. But the economy won’t be the only thing that’s taken over. Our public lands, clean air and clean water will face a withering assault.

This type of “Energy Independence” will be the final nail in the coffin assuming the scientific consensus of 97 percent of the world’s leading climate scientists are correct, when they said:

“Observations throughout the world make it clear that climate change is occurring, and rigorous scientific research demonstrates that the greenhouse gases emitted by human activities are the primary driver.”

Gary Wockner, PhD, is a Colorado-based environmental activist and the author of the 2016 book, River Warrior: Fighting to Protect the World’s Rivers. Contact Gary at Gary@GaryWockner.com.