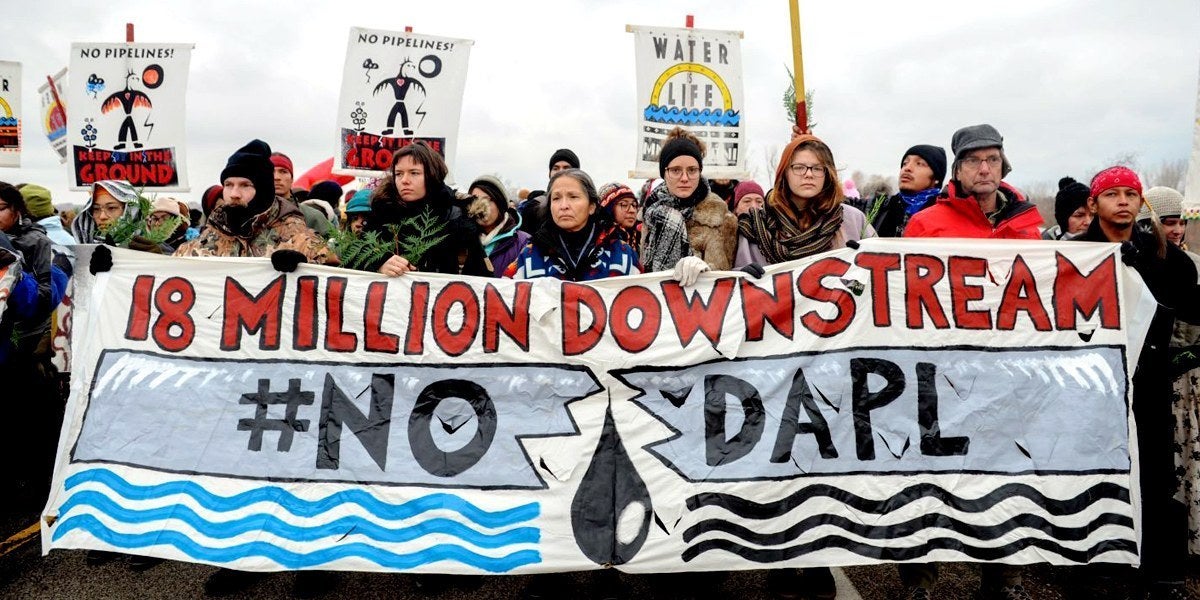 Early yesterday, work restarted on the highly controversial Dakota Access Pipeline (DAPL), less than a day after the Trump administration granted a final easement to allow the project to go ahead over the disputed land near the Standing Rock reservation.

As work began again, several things have become apparent since Trump took office, if they were not blatantly obvious before.

This is a man who is a bully, who has no regard for the constitution or the rule of law, unless it suits him. This is a man who lives in an isolated bubble of a small clique of advisors who shield him from the reality of what is happening in the real world. This is a man who does not care about climate change or Indigenous rights.

You should watch the footage from ABC of Trump saying: “As you know I approved two pipelines that were stuck in limbo forever. I don’t even think it was controversial. I approved them. I haven’t even had one call from anybody saying that was a terrible thing you did. I haven’t had one call … Then as you know I did the Dakota Pipeline and no one called up to complain.”

Does the President not watch the news? Does he not look online? Can’t he see that the protests against the Dakota Access Pipeline have become the biggest environmental story on the last year?

Emboldened by Trump’s latest move, on Wednesday, the company behind the pipeline, Energy Transfer Partners, said it had now “received all federal authorizations necessary to proceed expeditiously to complete construction of the pipeline.”

If you think that is the end of the matter, you would be totally wrong. Three things may yet scupper the project, which Energy Transfer Partners says will be finished by June.

Next Step in the Fight to Stop the Dakota Access Pipeline https://t.co/I351YAo9go #NoDAPL @Earthjustice @greenpeaceusa @350 @RobertKennedyJr

Firstly, there are ongoing legal battles. The Standing Rock Sioux Tribe has vowed to continued fighting the pipeline in the courts, even if it completed.

In response to the granting of the easement, the Standing Rock Sioux Tribe chair Dave Archambault II said, “The drinking water of millions of Americans is now at risk. We are a sovereign nation and we will fight to protect our water and sacred places from the brazen private interests trying to push this pipeline through to benefit a few wealthy Americans with financial ties to the Trump administration.”

Others vowed to continued the fight too. David Turnbull, campaigns director of Oil Change International released the following statement: “This pipeline has been stopped before and we will work together to stop it again. The brave resistance of the water protectors in North Dakota has sparked a nationwide movement that will stand united today and in the days ahead.”

Moreover, yesterday, the nearby Cheyenne River Sioux tribe filed yet another legal case against the pipeline, trying to halt construction, in part arguing that that the Army Corp of Engineers was wrong to terminate an Environmental Impact Statement which had been ordered by President Obama.

They argue that by cancelling the full environmental impact assessment, the Army Corps may have acted illegally. Jan Hasselman, lead attorney for the Tribe argues “The Obama administration correctly found that the Tribe’s treaty rights needed to be acknowledged and protected and that the easement should not be granted without further review and consideration of alternative crossing locations. Trump’s reversal of that decision continues a historic pattern of broken promises to Indian Tribes and unlawful violation of Treaty rights. They will be held accountable in court.”

Secondly, the disinvestment case against the pipeline is gathering a pace. On Tuesday, in a significant blow to Energy Transfers, Seattle became the first U.S. city to terminate its relationship with a major bank, Wells Fargo, in protest of it providing a credit facility to the pipeline. The move denies the bank access to $3 billion of funds and is a huge financial and public relations blow to the bank.

On the same day, Davis in California also promised to sever ties with the same bank.

Thirdly, every day groups are mobilizing against DAPL, with events planned across the U.S. The events will culminate in a large-scale “Native Nations” march in Washington DC on March 10, led by the Standing Rock Tribe and Indigenous Environmental Network.

Meanwhile, up to 500 people are still living in bitterly cold conditions at three camps near the pipeline route. Theda New Brest, a member of the Blackfoot Confederacy, said simply: “We are on the edge of a precipice. We have to stand. Mother Earth is life.”

Earthjustice is asking people to call Trump, in response to his claims that “no one has complained” about the Dakota Access Pipeline. Go here.