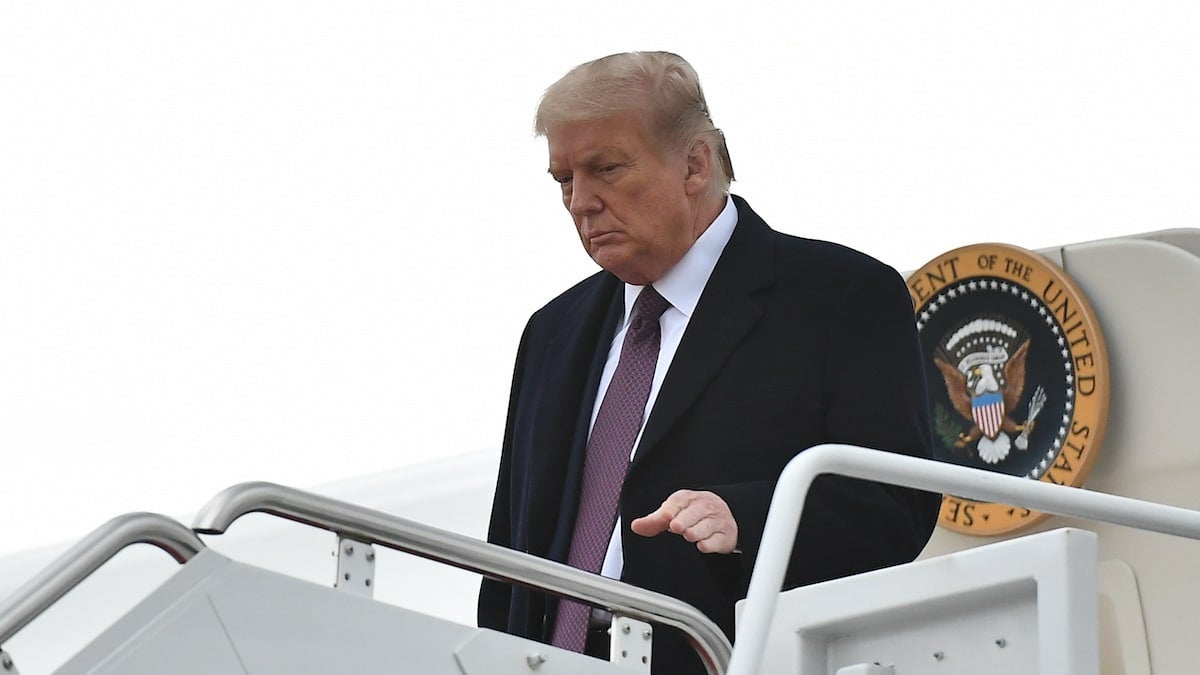 Trump steps off Air Force One upon arrival at Andrews Air Force Base in Maryland on Oct. 1, 2020. He returned to Washington, DC after attending a fundraiser in Bedminster, New Jersey. MANDEL NGAN / AFP via Getty Images

Donald Trump tweeted just before 1 a.m. Friday morning that he and his wife, Melania Trump, had tested positive for COVID-19.

In a statement, White House physician Dr. Sean P. Conley said that he “received confirmation” of the diagnosis. “The president and first lady are both well at this time, and they plan to remain at home within the White House during their convalescence,” he said.

The announcement that the president and the first lady will isolate immediately raised questions about an election that is just 32 days away and has already been upended by the novel coronavirus, as NPR reported.

The White House changed Trump’s schedule for Friday to cancel a fundraiser in Washington, DC and a campaign rally in Florida. According to NPR, Trump is expected to remain home for the next two weeks and cancel all of his campaign events, but he will continue to work.

Trump is not the first head of state to test positive for COVID-19. Earlier this year, Prime Minister Boris Johnson was hospitalized for COVID-19 complications. Prince Charles also had it, as have the president and first lady of Brazil, as well as the leaders of Brazil, Honduras, Guatemala and Bolivia, according to The New York Times.

The announcement of the positive test came hours after Trump acknowledged that a close aide, Hope Hicks, had tested positive for COVID-19. She had traveled with him on Air Force One after Tuesday night’s debate in Cleveland, according to The Washington Post.

Trump has repeatedly downplayed the severity of the virus, even mocking Joe Biden in Tuesday night’s debate for his habit of wearing a mask. “I don’t wear masks like him,” the president said derisively in Tuesday night’s debate. “Every time you see him, he’s got a mask.” He went on to say that even when Biden was 200-feet away he’d wear an oversized mask.

Trump is 74 and obese, which puts him in the high-risk category for COVID-19 complications, as CNN reported. If his condition deteriorates, it will raise questions about whether or not he should remain on the ballot, even though voting has already started in some states, according to The New York Times.

The New York Times reported that Trump’s senior aides were grappling with how widespread the infection is amongst White House officials, who rarely wear masks in deference to the president’s disdain for them. Trump’s aides were undecided overnight whether or not he should give an address from the White House on Friday or find another way to address the public.

Prior to the announcement that Trump and the first lady both tested positive for the virus, he had attended a fundraiser at his golf club in Bedminster, NJ. According to The Washington Post, Trump was in close contact with aides, confidants, and dozens of others at the roundtable event.

At Tuesday’s debate, Joe Biden denounced the way Trump has encouraged people to flout best practices for stopping the transmission of the virus that has claimed the lives of over 200,000 Americans.

“He’s been totally irresponsible the way in which he has handled the social distancing and people wearing masks, basically encouraged them not to. He’s a fool on this,” Biden said about Trump, as The Washington Post reported.