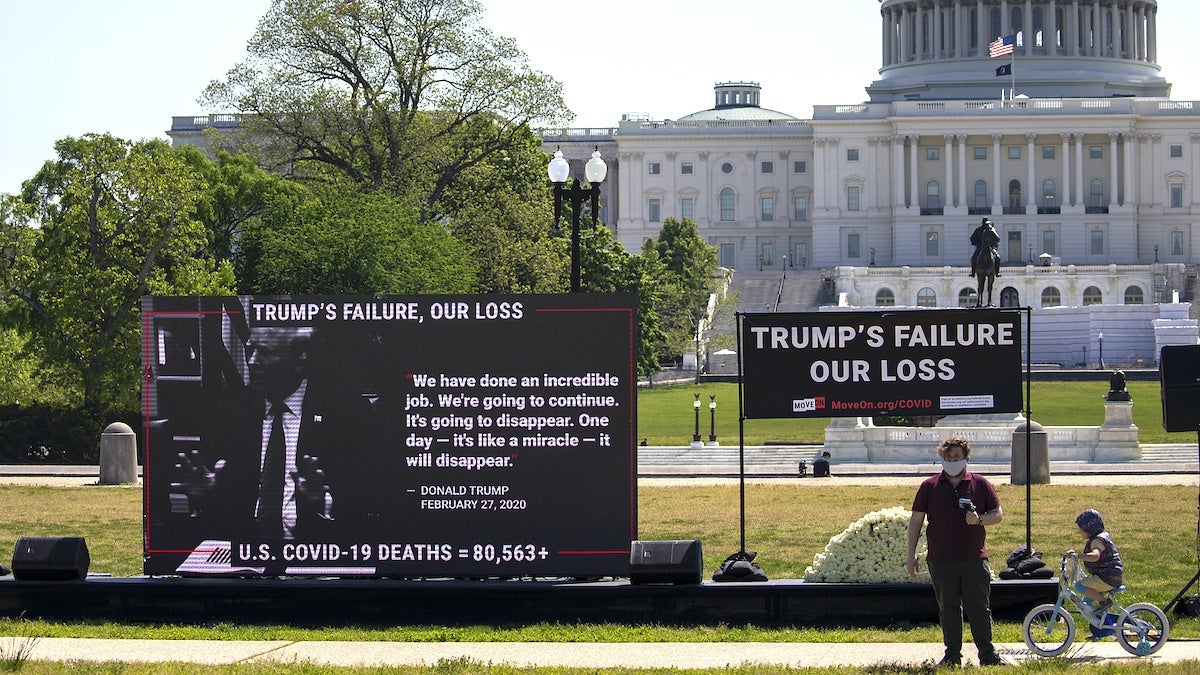 The MoveOn political action committee memorializes coronavirus deaths in the U.S. on May 13, 2020 in Washington, DC. Tasos Katopodis / Getty Images for MoveOn

As the coronavirus has spread around the globe, so have the germs of misinformation and conspiracy theories about the new disease. Fake news about the virus is so prevalent that health professionals have started referring to it as an “infodemic.”

To better understand the problem, researchers at Cornell University and Cision Global Insights conducted the first in-depth investigation of false coronavirus information in online and print media. They looked at more than 38 million English-language articles published between Jan. 1 and May 26 and came to a surprising conclusion: 37.9 percent of articles dealing with coronavirus misinformation mentioned U.S. President Donald Trump.

“We conclude that the President of the United States was likely the largest driver of the COVID-19 misinformation ‘infodemic,'” the researchers wrote.

Trump has spread false information throughout the course of the pandemic. Early on, he downplayed the risks, going against the advice of his own Centers for Disease Control and Prevention (CDC) by saying people with mild cases could continue to work. He also touted unproven cures and treatments, such as anti-malaria drug hydroxychloroquine and the use of bleach or UV light to kill the virus inside the body.

New evidence has revealed that Trump knew at least some of his claims were false when he made them. In tapes of interviews with journalist Bob Woodward, the president acknowledged the deadliness of the virus as early as February and March, but said he was downplaying it in order to prevent panic.

However, the researchers told The New York Times they had expected the infodemic to be driven more by the many COVID-19 conspiracy theories than by mentions of the president and his statements.

“The biggest surprise was that the president of the United States was the single largest driver of misinformation around Covid,” lead author and Cornell Alliance for Science director Sarah Evanega told The New York Times. “That’s concerning in that there are real-world dire health implications.”

The researchers found false information in more than 1.1 million of the more than 38 million articles they assessed, or just under three percent. They included in their count articles that mentioned coronavirus lies in order to fact-check them. However, they found that fact-checking only accounted for 16.4 percent of the “misinformation conversation.”

This suggests that “the majority of COVID misinformation is conveyed by the media without question or correction,” the researchers wrote.

They also identified 11 subtopics of misinformation, including miracle cures and various conspiracy theories such as plandemic or the idea that the pandemic was a hoax planned by the Democratic Party to coincide with Trump’s impeachment. They found that miracle cures were by far the most reported topic of misinformation, appearing in more articles than all the other topics combined.

Trump and miracle cures were also tightly linked, as the media reported on Trump’s promotion of hydroxychloroquine. These types of articles peaked April 24 after the president suggested the internal application of bleach and UV light.

The study, published Thursday, has not yet been peer reviewed because the process is time consuming and the researchers thought the information in their study was of great public importance, they told The New York Times.

“Misinformation about COVID-19 is a serious threat to global public health,” the researchers wrote. “If people are misled by unsubstantiated claims about the nature and treatment of the disease, they are less likely to observe official health advice and may thus contribute to the spread of the pandemic and pose a danger to themselves and others.”