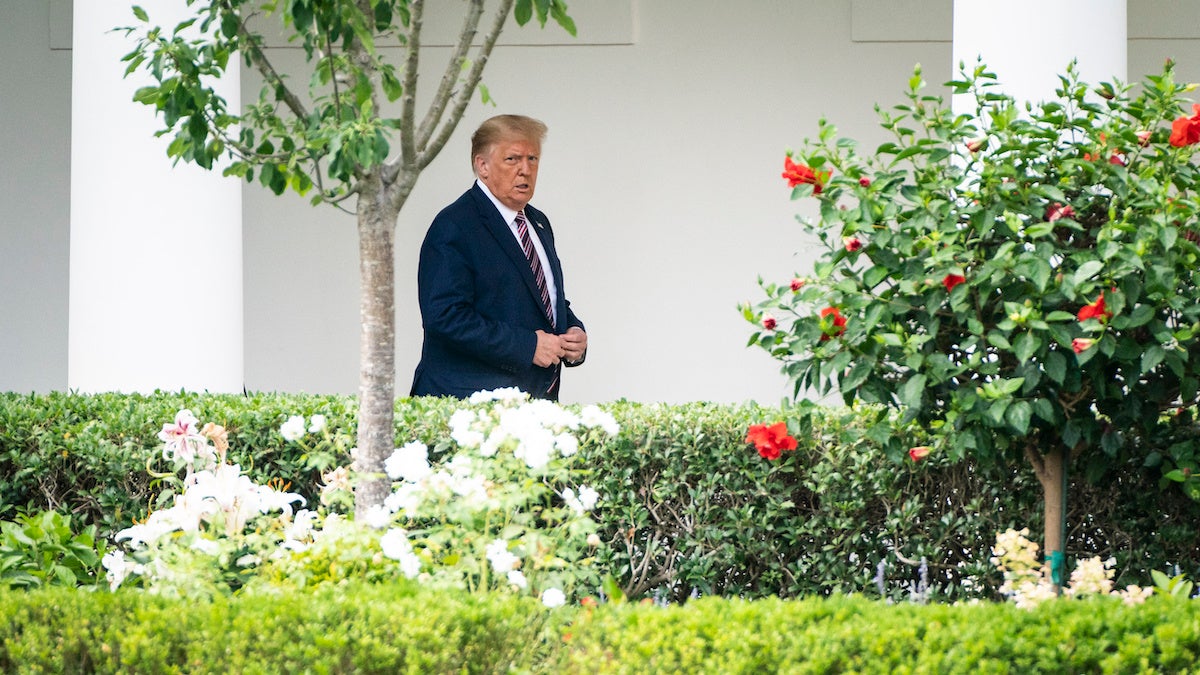 Trump walks the colonnade before arriving to speak on the South Lawn at the White House on July 16, 2020 in Washington, DC. Jabin Botsford / The Washington Post via Getty Images

President Donald Trump continued to downplay the severity of the coronavirus pandemic one day after the U.S. death toll passed 140,000, according to a Reuters tally.

“Many of those cases are young people that would heal in a day,” Trump said in an interview with Fox News Sunday, as NPR reported. “They have the sniffles, and we put it down as a test.”

WATCH: President Trump on the current state of the virus.
"When you talk about mortality rates, I think it's the opposite. I think we have one of the lowest mortality rates in the world."
#FoxNewsSunday pic.twitter.com/WZ5d3OqklB

Also on Saturday, the global death toll rose past 600,000, Johns Hopkins University said, as The Associated Press reported. The world also broke its record for the most new cases reported in a day, with 259,848. The U.S. continues to lead the world in both deaths and cases. Out of more than 14.5 million cases worldwide, it is responsible for more than 3.7 million of them, according to Monday morning figures from Johns Hopkins University.

During the interview, Trump claimed that the rising case count was due to an increase in testing.

“We go out into parking lots, and everything, everybody gets a test. We find, if we did half the testing — with all of that being said, I’m glad we did it, this is the right way to do it. I’m glad we did what we’re doing, but we have more tests by far than anywhere else in the world,” he said, as Business Insider reported.

Wallace challenged that the rise in cases could not only be attributed to more tests — while testing has increased 37 percent, cases have increased 194 percent, he said.

“it isn’t just that the testing has gone up but that the virus has spread, the positivity rate has increased, the virus is worse than it was,” Wallace pointed out.

It was at this point that Trump said most of those cases were “sniffles” that would never have been uncovered if it weren’t for extensive testing.

This isn’t the first time that Trump has diminished the seriousness of the new disease. In March, he told Fox’s Sean Hannity that people with mild cases could go to work and get better. This contradicted Centers for Disease Control and Prevention advice that anyone exhibiting symptoms should stay home and contact a doctor.

Wallace challenged Trump on another of his falsely optimistic statements about the virus, that it would “disappear.”

“I’ll be right eventually,” Trump asserted, according to NPR.

Despite Trump’s claims about the severity of COVID-19 cases, both deaths and hospitalizations are on the rise, Business Insider pointed out. Deaths have risen from 473 per day on average for the week of July 4 to 768 per day on average the week of July 18. Around 5,000 Americans are now dying of the virus weekly, according to Reuters. Meanwhile, Canada has reported 8,800 coronavirus deaths total.