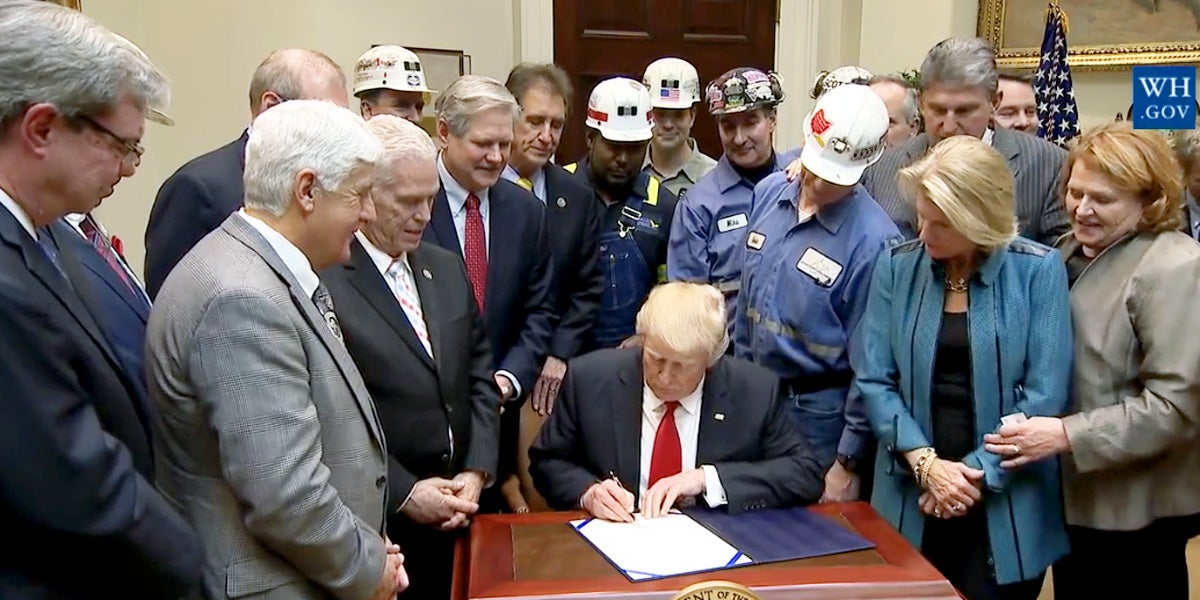 The Washington Post has reported that the Trump administration may announce a number of executive orders in the coming days.

The rumored targets—the Clean Power Plan, the Clean Water Rule and the federal coal leasing moratorium—protect our air and water, save lives and take action to stop climate disruption. By the numbers, here’s what’s at stake if Trump attacks these vital safeguards and reforms.

First Ever: On June 2, 2014, as part of President Obama’s Climate Action Plan, the U.S. Environmental Protection Agency (EPA) proposed the Clean Power Plan, our nation’s first-ever protections from carbon pollution from power plants. The plan puts states in the driver’s seat to hasten their shift to clean energy and reduce carbon pollution. It will also help reduce other forms of dangerous air pollution, helping to keep our children healthier.

Three Times: The Clean Power Plan has a solid legal foundation in the Clean Air Act. On three separate occasions, the U.S. Supreme Court has upheld the EPA’s authority and responsibility under the Clean Air Act to protect human health and welfare by limiting carbon pollution.

37 Percent: Fossil-fuel fired power plants are the largest source of carbon pollution in the U.S. and therefore a major contributor to climate change. Carbon emissions from power plants represent 37 percent of the total CO2 emissions emitted in the U.S.

97 Percent: 97 percent of all the generating capacity added in the U.S. in December 2016 was either wind or solar energy, according to SNL Energy.

In March 2014 the U.S. Environmental Protection Agency and the Army Corps of Engineers proposed a long-overdue Clean Water Act rule to end the confusion over which streams and wetlands are protected by the law.

The health of our nation’s rivers, lakes and bays depends on the network of small streams and wetlands that flow into them. Here’s what’s at stake:

117 Million: The Clean Water rule provides protections for the drinking water sources for more than 117 million Americans. One in three Americans get drinking water from public systems that rely on headwater and seasonal streams.

Coal Leasing Moratorium: The Cost of Coal Under a Broken System

President Obama initiated a coal leasing moratorium on federal lands while the Department of the Interior reviewed the outdated coal leasing program, which has been shortchanging taxpayers while benefiting coal executives for decades.

Sorely in need of reform, under the outdated program the Department of the Interior has been issuing leases to coal companies on the cheap for coal on lands belonging to the American people, giving them a sweetheart deal that has flooded the market with subsidized coal at below-market prices, while damaging our climate and our public lands.

41 cents: 40 percent of all coal burned in the U.S. comes from our federal leases on public lands. Under the existing system, up to 90 percent of bids in the Powder River Basin received only a single bidder, resulting in sales far below what companies typically paid for on private lands. You could buy one ton of federal coal for less than a packet of M&Ms—just 41 cents.

~$28.9 billion: Local taxpayers are not getting a fair return for the use of their public lands with royalty rates set unreasonably low. Under this system, American taxpayers are losing hundreds of millions of dollars each year, totaling an estimated $28.9 billion in revenues in the Powder River Basin alone over the 30 years since the federal government last overhauled its coal leasing program.

Trump is rolling back critical public health and environmental standards so his buddies in the fossil fuel industry can continue to pad their pockets at our expense. The Sierra Club will be fighting these rollbacks every step of the way and Americans nationwide will continue to resist—join us.