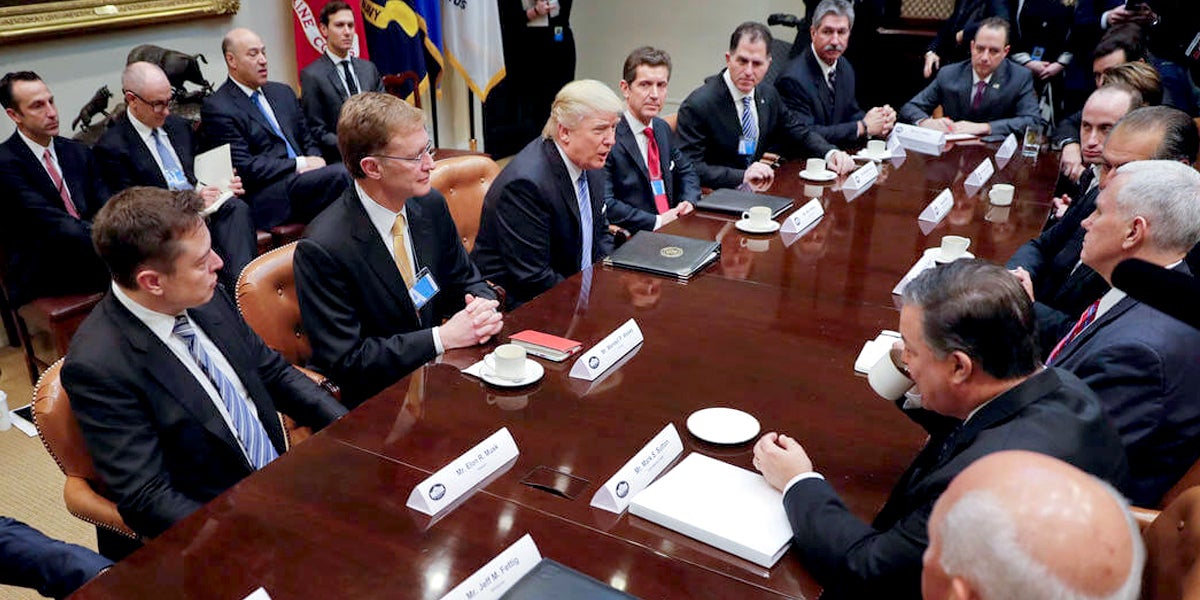 One of the biggest impacts of President Trump’s election is not the direct damage he may do—but the cultural shift he has unleashed among American business leaders. Assaults on decency and health that would have been unthinkable a few months ago are now the expected response by corporate executives pressured by short-term market pressures and right-wing political allies.

Let’s be clear. American business is at risk of plunging into a race to the bottom—not only must Americans resist Trump directly, they must resist the culture of law-breaking and recklessness he is trying to trigger.

One of the most spectacular examples is only a few hundred miles from the White House, in Charleston, West Virginia. The state led the nation in mining deaths in 2016 and has already seen two deaths in 2017; but in spite of this grim history the coal industry has proposed the complete elimination of state health and safety regulations and inspections in the West Virginia coal mines. This in a state where, only a few months ago, a federal appellate court upheld a prison sentence for Massey Energy CEO Don Blankenship for his role in a mining catastrophe that killed 29 miners in Massey’s Upper Big Branch Mine, the direct result of poor enforcement of safety standards.

The West Virginia Gazette summed up the bill: “The heart of the legislation is a section that simply eliminates the ability of state mine safety office inspectors to issue notices of violation or levy fines for mine operators or coal companies for any safety hazards unless they can prove there is an ‘imminent danger’ of death or serious physical harm.” If the coal industry has its way the much overblown Obama “War on Coal” will be replaced by a stealthy, Trump inspired “War on Coal Miners.”

The coal industry has long enjoyed a reputation for callousness. But the new mood exemplified by President Trump has spread to companies that invest a lot of resources in portraying themselves as responsible, sustainable corporate citizens. Take Monsanto.

The company has been engaged in a high stakes effort to maintain its ability to market its Roundup brand of herbicide in spite of mounting evidence that it’s safety is uncertain at best. When Roundup’s active ingredient was listed as a probably human carcinogen under California’s Proposition 65 (disclosure: I co-authored it 30 years ago), Monsanto sued, claiming that it was a violation of the constitution to require the company to inform users and others exposed of the view of international science bodies of its risks.

A California court shot the lawsuit down, commenting that there was no plausible basis for the company’s claim that making the company inform the public it was selling them a potentially dangerous chemical was unconstitutional. Then, when Monsanto argued that the documents on the basis of which the judge had ruled against it be kept secret, the judge threatened the company with sanctions and required the documents to be released.

It became clear why Monsanto wanted the documents sealed. The revealed a sordid history of the company’s efforts to keep Roundup’s real risks a secret, including apparent collusion with regulatory staff inside the U.S. Environmental Protection Agency to head off further research into its dangers.

Monsanto’s response? Embarrassment? Hardly. The company proclaimed that it would continue to appeal the case. It insists that Roundups users and other exposed were not entitled to know that international agencies had found that the herbicide was a probable human carcinogen.

Companies are clearly being enticed by the Trump administration in particular the cabinet, with the promise that a new culture of impunity and indifference is being let loose. One of the first of President Obama’s regulatory initiatives to be rolled back was a simple one that discouraged federal contracts from being awarded to companies that had violated federal labor laws.

As I’ve pointed out, even America’s auto industry, rescued in 2009 by a combination of public funding and innovation supporting efficiency regulations, now wants permission to fall behind again as the global auto market moves towards efficiency and electrification. Detroit eagerly grabbed when Trump offered to weaken fuel economy and emission fuels for 2018-2022. Leader’s like General Motor’s Mary Barra who only months ago were pinning their corporate brand and future on the company’s pioneering BOLT electric car, have now joined in rejecting the regulatory certainty that functioned as the market guarantor of the BOLT’s future.

Detroit begged for this roll-back in spite of warning from investor voices like Ceres that weakened standards puts the industry’s key stakeholders at risk. Suspending the rules “would harm auto parts suppliers, who employ two and a half times more Americans than auto companies and who, relying on current standards, have invested heavily in fuel savings technologies,” said Carol Lee Rawn, transportation director at Ceres. “When consumers save money on gas, they spend more on local goods and services, which benefits businesses, jobs and the U.S. economy.”

Business cannot be permitted to hide behind the excuse that Trump somehow made them change their values and behavior or that in supporting regulatory roll-backs they won’t actually do anything bad, even though they are now allowed to. When an allegedly responsible company urges government to open the door to bad actors, it is guilty for the harm which results, even if other companies do the direct damage.

Trump talked a lot about “law and order.” It ought to apply to business as well.