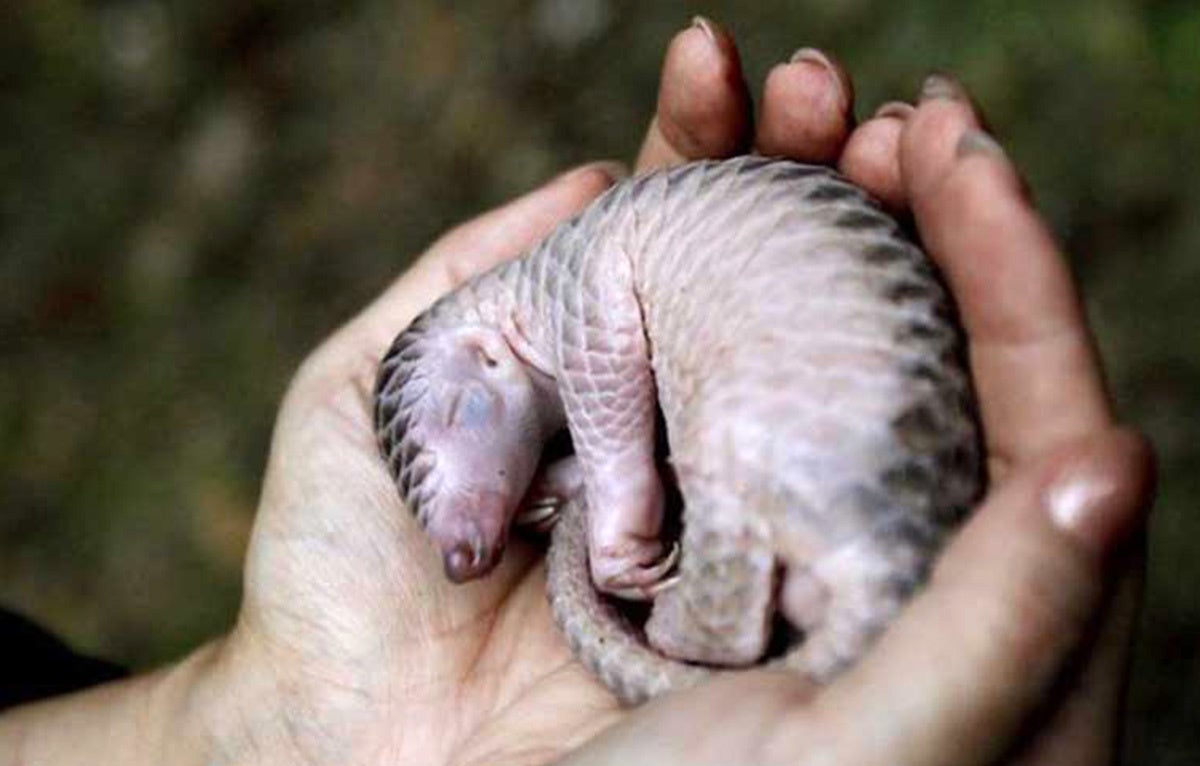 A baby-pangolin. The U.S. has been instrumental in the past in combatting wildlife trafficking, a role the nation could abandon under Trump's draconian budget.

Proposed funding cuts to environmental programs in President Trump’s proposed 2018 budget have drawn anxious attention from around the world. But while the biggest numbers deal with rolling back the Obama administration’s climate change initiatives, more subtle withdrawals of federal support from lesser known international programs threaten the continued existence of some of the planet’s most iconic animals.

As comparatively paltry as a few million dollars retracted here and there from a $1.15 trillion federal budget may seem, for those desperately striving through underfunded programs to preserve the world’s wildlife, the loss of monetary and moral support from the U.S. could be devastating.

And wildlife wouldn’t be the only victims. The societal havoc wreaked by unchallenged trafficking cartels, and the loss of important tourist income due to vanished elephants, lions and giraffes resulting in abandoned safaris, could directly impact poor communities in Africa and Asia.

It remains to be seen if the U.S. Congress will embrace Trump’s draconian cuts for 2018. But even if the legislature disallows the reductions next year, the administration still has between three and seven years left to run. And it seems unlikely that the president will shift very far away from his professed “America First” policies. 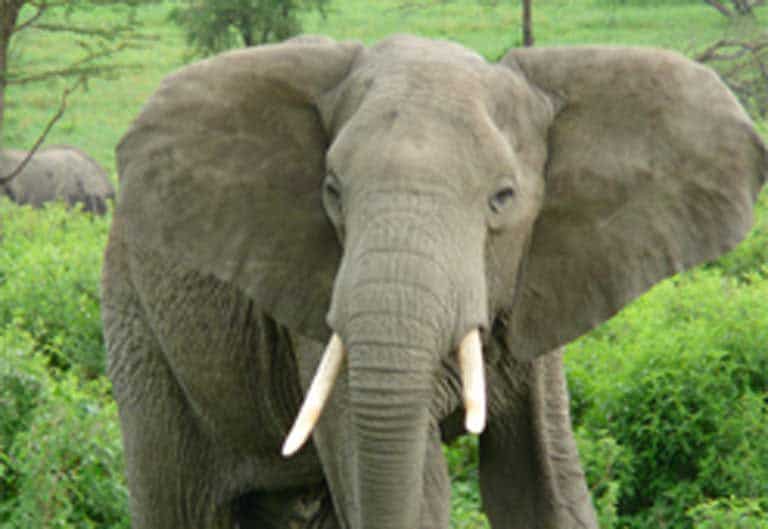 An elephant in Tanzania. USAID programs have helped fund community conservation programs and ranger equipment and training in Africa. Trump’s budget would slash funding to many such programs. nickandmel2006 / flickr

The U.S. State Department is tasked with administering the Presidential Taskforce on Wildlife Trafficking, co-chairing that body with USAID, the U.S. Fish & Wildlife Service (USFWS) and the Department of Justice. This interagency coalition justifies its mission this way: “Wildlife trafficking is an international development issue because it undermines security, rule of law, and our efforts to end extreme poverty.”

Through the auspices of the State/USAID interface, the U.S. has applied a multi-pronged approach to combat global trafficking. That includes anti-poaching workshops utilizing SMART technology for rangers in Central and East Africa; helping strengthen wildlife laws in Kenya and Mozambique; working with major American and African airlines to train staff to detect and intercept trafficked goods; and initiating a cultural shift by reaching “over 740 million people across Asia through the Internet, TV spots, and installations at airports” to reduce wildlife product demand. If Trump’s budget is approved, the State Department’s budget for all this will be more than halved—falling from $90.7 million to $40.9 million.

USAID’s biodiversity program, which in FY2017 spent $265 million in conservation efforts across fifty countries in a mission to protect natural landscapes and wildlife while enhancing U.S. economic and security interests, would see its expenditures shrink to less than a third of that amount, to $69.9 million. 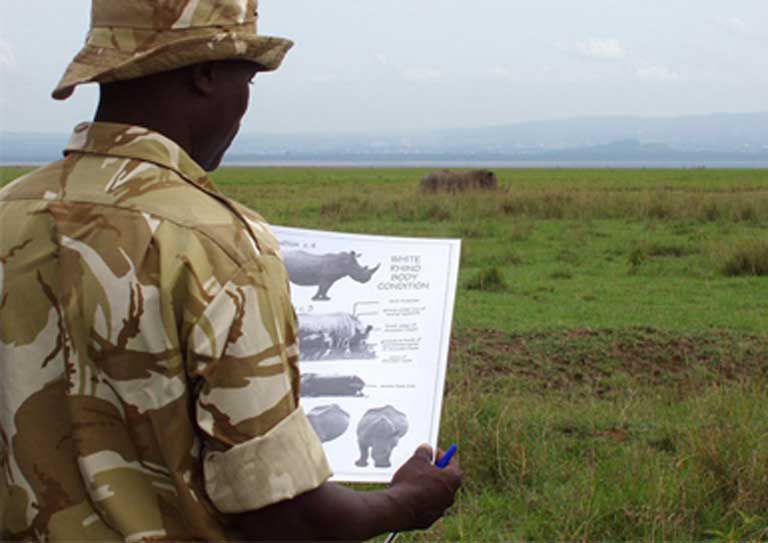 In 2015, USAID programs helped fund community conservation in northern Kenya, reduced poaching of elephants and rhinos by 35 and 78 percent respectively, and invested in training, equipment, education and new outposts for rangers—the men and women on the front lines of the wildlife wars. One result: rangers in Central Africa patrolled up to 50 percent more territory than the year before and apprehended more than 400 poachers thanks to wider deployment of the Spatial Monitoring and Reporting Tool (SMART), a system of ranger-based monitoring techniques and technologies.

Under Trump’s budget, the USFWS’s International Species program—focusing on African and Asian elephants, great apes, migratory birds, tigers, rhinos and sea turtles—would go from a 2017 budget of $9.15 million to being completely zeroed out.

With that cut, significant anti-poaching, community engagement, habitat protection and wildlife management programs would vanish from poor countries whose priorities generally place conservation far down the list. Under Trump’s plan, the cash-strapped USFWS would see its 2018 budget decreased by $202.9 million compared to 2017. 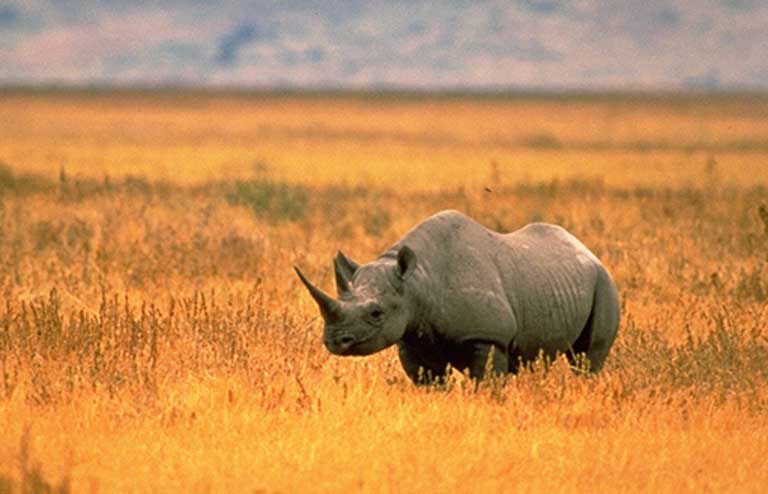 A black rhino. U.S. wildlife conservation efforts have contributed much to the preservation of animals worldwide in past years. Those efforts are now threatened by the Trump administration. John and Karen Hollingsworth, U.S. Fish and Wildlife Service

Environmental groups have petitioned for several species imperiled by criminal wildlife trafficking to be protected under the Endangered Species Act (ESA), including giraffes, pangolins and African elephants. Such listings would curb America’s role in the trade of these species’ body parts, among other benefits. But proposed funding cuts make it likely that the Trump administration won’t act on these petitions.

While it may be difficult to accept, this is the way the world will look if the president of the U.S. successfully moves his proposed budget through Congress. Calls to congressional offices failed to shed light on how many and how much of Trump’s reductions will show up in the 2018 budget to be approved by the House and Senate. 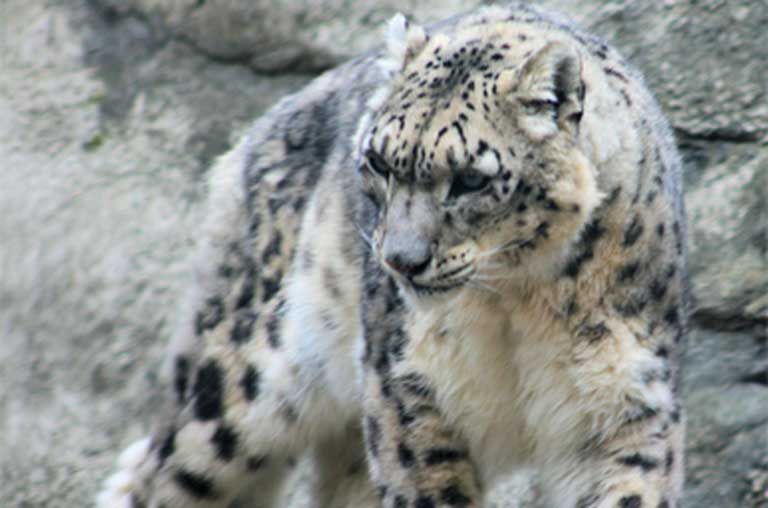 A snow leopard. Already underfunded international conservation efforts could be seriously undermined by Trump’s 2018 budget if it is approved.Sujit kumar Mahapatra

According to the Wildlife Conservation Society, funding to protect new species under the Endangered Species Act would be cut by nearly 17 percent under Trump’s budget, which would “severely hinder” the USFWS from progressing with its seven-year plan that allows the agency to prioritize over 350 species for listing decisions.

These cuts couldn’t come at a worse time. African elephants are currently being slaughtered for their ivory at the rate of eight percent of their total population per year, or nearly 30,000 annually. Interior’s conservation programs provide technical and financial assistance to range states to protect elephants and their habitats, with money for elephant population management, public education, and anti-poaching activities. The USFWS website details some of the important projects that have been funded in the past and are now on the budgetary chopping block.

The USFWS Conservation and Enforcement Budget would likewise be cut, from around $182 million for 2017 to $166 million in 2018. While this may not seem like a huge reduction, it is being sliced from a budget that is already far too small to do the job. This funding is critical to protecting species imperiled by the illegal wildlife trade, and enables U.S. investigations of wildlife crimes, helping put traffickers in jail; regulating the wildlife trade; and helping Americans understand and obey wildlife protection laws. Species that will be most hurt by this cut would likely be those for which the U.S. is a major market, including elephants (the U.S. is the second largest international market for trafficked wildlife, after China).

In a reply to an emailed query, U.S. Senator and former vice presidential candidate Tim Kaine (D-VA) said that he would “strongly oppose” the president’s 2018 budget plan, noting that in 2013, the U.S. joined 21 nations in launching Operation Cobra, a successful multinational strategy designed to tackle illegal wildlife trading in Africa and Asia. Kaine also pointed to President Obama’s Executive Order 13648, aimed at improving coordination with other governments in combating trafficking. Both of these pledges of American leadership to confront the international wildlife crisis are now on the table for defunding. 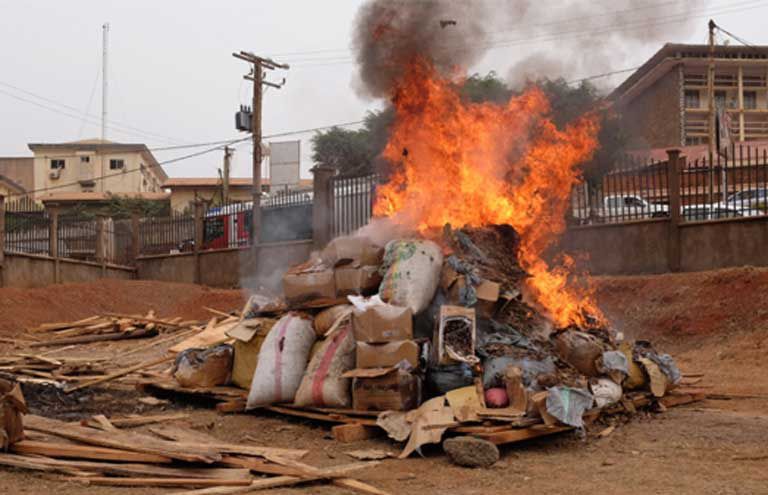 A pangolin scale burn in Cameroon, Africa, supported by the U.S. Fish and Wildlife Service. Pangolins are believed to be the most heavily trafficked wild mammals in the world, with as many as one million being poached from the wild during the last decade.Linh Nguyen Ngoc Bao 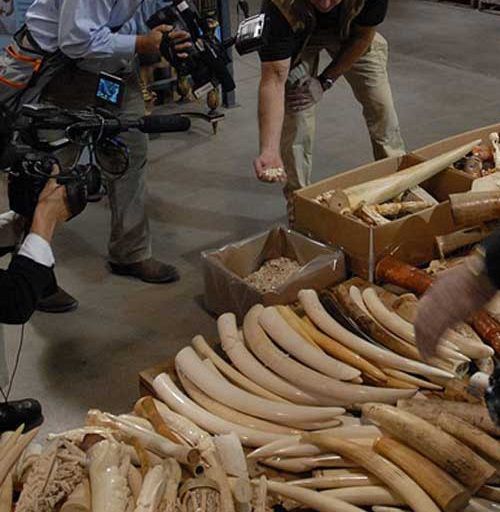 USFWS Special Agent Steve Oberholtzer discusses ivory trafficking with reporters. In the past, the U.S. has worked diligently to combat the illegal wildlife trade.USFWS

To put all of this in perspective, Congress only provides approximately three and half percent of the funding that the USFWS’s own scientists estimate is needed to recover species, according to a Center for Biological Diversity report on endangered species spending. This amount, however meager and inadequate, is now in the crosshairs of an administration whose antipathy for wildlife, natural landscapes and environmental protection is manifest in its many administrative actions.

The Trump budget would cut the Cooperative Endangered Species Conservation Fund, which allows state and federal partners to recover currently listed species, by $34 million, a 64 percent reduction. His budget also reduces funding for foreign endangered species like elephants, rhinoceros and tigers by 19 percent, and reduces the funding for the listing program by 17 percent. Currently 500 plants and animals are waiting for consideration for protection.

Carter Roberts, president of the World Wildlife Fund, said that the 2018 budget in its current form would be a calamitous abandonment of American pledges to assist poor countries struggling to preserve our common wild heritage. “These cuts will turn back the clock on advances made in combating common global challenges like food and water security, wildlife trafficking, and climate change,” he said, urging passage of a budget that “more closely aligns with America’s long-held humanitarian and conservation values.”

Roberts’s appeal is echoed by other leading conservation groups, including the Wildlife Conservation Society and The Nature Conservancy, whose president Mike Tercek explained that, “American investments in international conservation support sustainable livelihoods, political stability and good governance in difficult regions of the world, thereby supporting our own national security and economic objectives.” Pulling back on these commitments, he said, would be prohibitively costly, harming our last remaining rhinos, snow leopards and sea turtles, but also undermining governmental accountability and due process in the developing world—critical to combatting the persistent state corruption that underlies the tragic success of international trafficking networks. 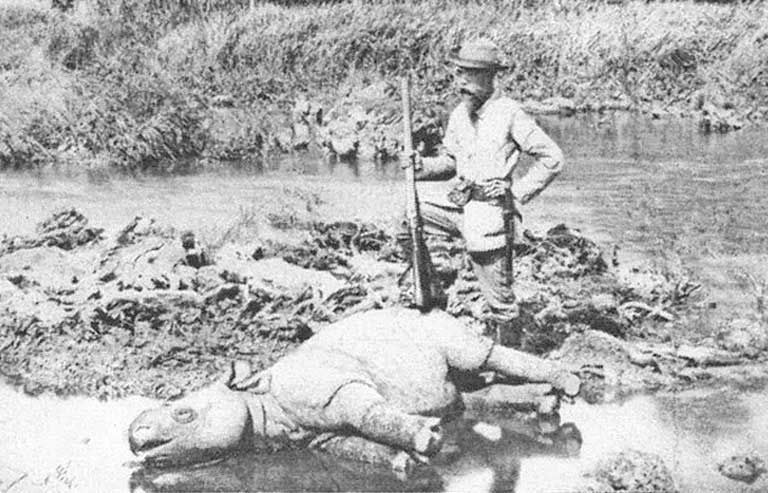 An 1895 photo of a young but dead Javan Rhino in Ujung Kulon; the hunter is Charles te Mechelen. Donald Trump Jr. is an avid big game trophy hunter in an era when conservationists are battling fiercely to protect the world’s fast vanishing wild animals.

Blasting away at the wild world

Fortunately for declining wildlife, the president does not have the final say on the U.S. budget. That remains for the House and Senate to decide, a decision that they’ve already once delayed this year. But the news out of Congress thus far isn’t all that good.

As of this writing, the State Department’s International Conservation Programs project, which this year allotted a mere $7 million to some of the most important wildlife organizations on earth, including the International Union for the Conservation of Nature and its indispensible Red List of data on thousands of species, would be totally defunded under Trump’s plan.

The jury’s still out on what the final 2018 budget will look like (with a vote not likely due until early December), but it’s clear that the current administration and many in the GOP dominated Congress are advocating an abandonment of long-held, fundamental domestic and international American tenets—especially helping the disadvantaged and taking a stand for treasured wild animals the world over.

Meanwhile, those who continue to assert these values, do so from a self-declared position of wanting to help others, of being on the right side of history, and of fulfilling our obligations across the globe.

For the planet’s most spectacular and endangered wildlife, public participation in the seemingly mundane wrangling over budgetary priorities has never been more important. 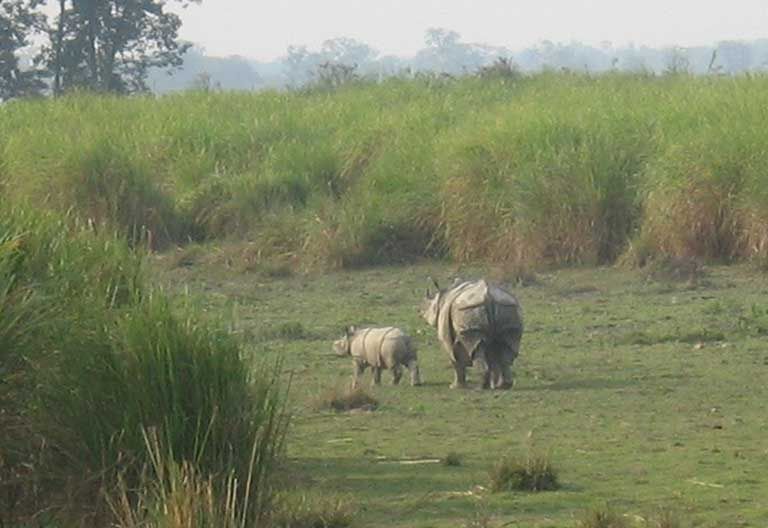