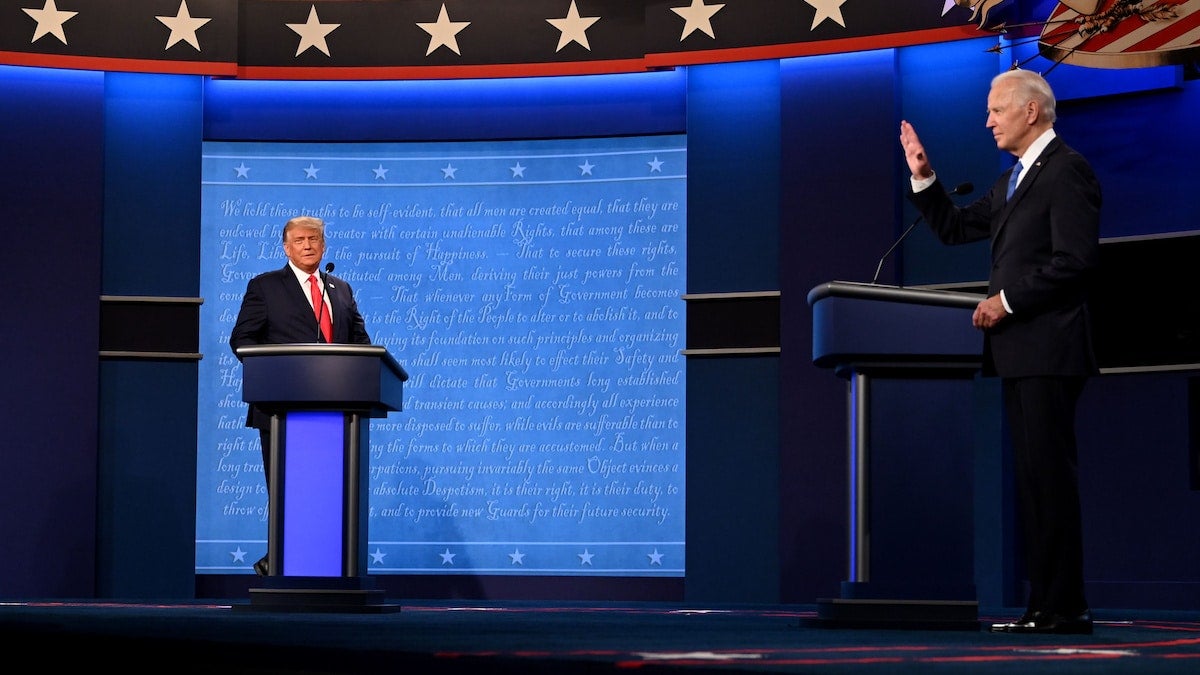 In response to the question from moderator Kristen Welker, “How would you both combat climate change and support job growth?” Trump insisted that he loves the environment and wants clean air and water. He said that his administration has started to plant trees and there have been record drops in carbon emissions during his administration.

Trump then made a rambling remark about air pollution in India, China and Russia, before touting that he took the U.S. out of the Paris agreement, giving a false version of what the Paris agreement requires of the U.S. and insisting that it would have sacrificed “tens of millions of jobs.”

By contrast, Biden noted that the climate crisis and a warming planet are “an existential threat to humanity.”

“We have a moral obligation to deal with it and we’re told by all the leading scientists in the world we don’t have much time,” he said and then pointed out that scientists say we have 8 to 10 years to tackle the crisis before we pass the point of no return, as The Washington Post reported.

He then went on to list infrastructure investments in charging stations to promote the use of electric cars, and retrofitting older buildings so they do not leak their heating and cooling. Biden said those upgrades will save millions of barrels of oil, help clean the environment and create more than 18 million jobs.

Trump, in his response, insisted that Congresswoman Alexandria Ocasio-Cortez and three other female Democratic lawmakers “know nothing about the climate.” Trump then claimed the plan would cost 0 trillion, even though Biden’s website says his plan will cost trillion.

Biden turned his attention to the support he has received from both environmental groups and labor unions.

The moderator then asked Trump why people of color, who are disproportionately affected by pollution since their communities are often up against oil refineries and chemical plants, should give him four more years in office.

“The families that we’re talking about are employed heavily and they’re making more money than they’ve ever made,” Trump replied. He then went on to claim that he saved the oil industry.

Biden replied by talking about the effect of living next to a fence line and how important it is to keep people safe by imposing restrictions on pollution.

Trump then stopped Welker from asking her final question and asked Biden if he would close down the oil industry. Biden insisted he would stop federal subsidies of fossil fuels and usher in a transition to renewable energy.

“We have to move towards a net zero emissions,” Biden said.