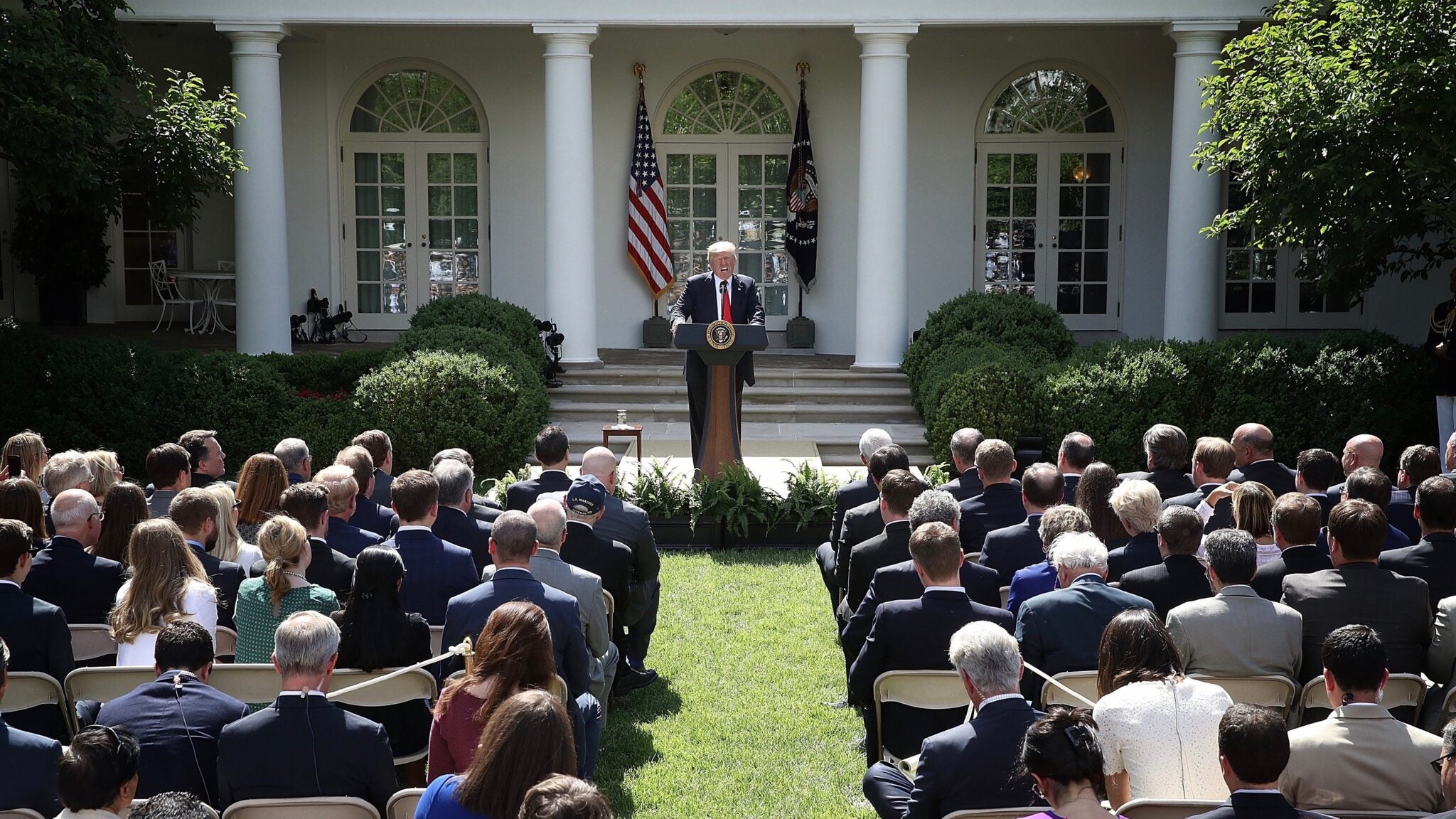 Donald Trump announces his decision for the U.S. to pull out of the Paris climate agreement in the Rose Garden at the White House June 1, 2017 in DC. Win McNamee / Getty Images

The Trump administration formally informed the UN that it would withdraw the U.S. from the Paris agreement Monday, the first day that it was possible to do so, The New York Times reported.

The move comes as no surprise, since President Donald Trump confirmed his intention to set the withdrawal process in motion Oct. 23. The letter his administration sent to the UN will allow Trump to pull the U.S. from the climate accord one day after the 2020 presidential election.

“Today we begin the formal process of withdrawing from the Paris Agreement,” Secretary of State Mike Pompeo announced on Twitter. “The U.S. is proud of our record as a world leader in reducing all emissions, fostering resilience, growing our economy, and ensuring energy for our citizens. Ours is a realistic and pragmatic model.”

Today we begin the formal process of withdrawing from the Paris Agreement. The U.S. is proud of our record as a world leader in reducing all emissions, fostering resilience, growing our economy, and ensuring energy for our citizens. Ours is a realistic and pragmatic model.

The withdrawal will make the U.S. the only country in the world that is not part of the pact to address the climate crisis by keeping global warming to well below two degrees Celsius above pre-industrial levels, The Guardian pointed out.

Other nations still in the agreement expressed dissapointment, according to BBC News.

The governments of France and China, who are expected to sign a statement on the “irreversibility of the Paris accord” Wednesday, both spoke out.

“We regret this and this only makes the Franco-Chinese partnership on the climate and biodiversity more necessary,” a spokesperson for the office of French President Emmanuel Macron said, as BBC News reported.

During his speech today in Pittsburgh, Trump is expected to announce that he will begin the formal withdrawal of the US from the Paris Agreement, in an attempt to derail the world’s unity to fight climate change.

We've synthesized that information into this helpful chart: pic.twitter.com/TMDaGzaag4

“It is about the darkest moment in American diplomacy in a very, very long time and a huge blow to global efforts,” 350.org founder Bill McKibben told the BBC’s Newsday program.

Longtime climate campaigner and former Vice President Al Gore condemned the move, but found a silver lining in the fact that the final withdrawal could not occur until after the election.

“Even if [Trump] follows through, it would take just 30 days for a new president to get us back in,” Gore said in a statement reported by The Guardian. “This decision is ultimately in the hands of the voters.”

No one person or party can stop our momentum to solve the climate crisis, but those who try will be remembered for their attempts to sacrifice the planet for their greed. My statement on today's #ParisAgreement announcement: https://t.co/G2bMIbIHRP pic.twitter.com/GlUdu4ccHC

But some analysts have said it might not be as simple as that, The New York Times explained. This is the second time the U.S. has withdrawn under a Republican from an international climate agreement it signed under Democratic leadership, the first being President George W. Bush’s withdrawal from the 1997 Kyoto Protocol.

“The United States has been written off in many cases as a partner,” Jonathan Pershing, the Obama State Department’s special envoy for climate change, told The New York Times. “You just can’t count on them.”

He said a Democrat rejoining the agreement would likely need to promise specific policy goals for moving away from fossil fuels.

Meanwhile, states and cities in the U.S. are attempting to act on their own. The group America’s Pledge, which brings together states, cities, businesses and others promising to continue taking climate action, represents around 70 percent of U.S. GDP and emits more than half of the country’s greenhouse gasses, its Vice Chair Carl Pope told The Guardian. But Pope didn’t think his coalition alone could bring the U.S. to carbon neutrality by 2050, a goal many countries have now adopted.

“We don’t think it’s likely just with the states we have, we think we need the whole country to be moving together,” Pope told The Guardian.