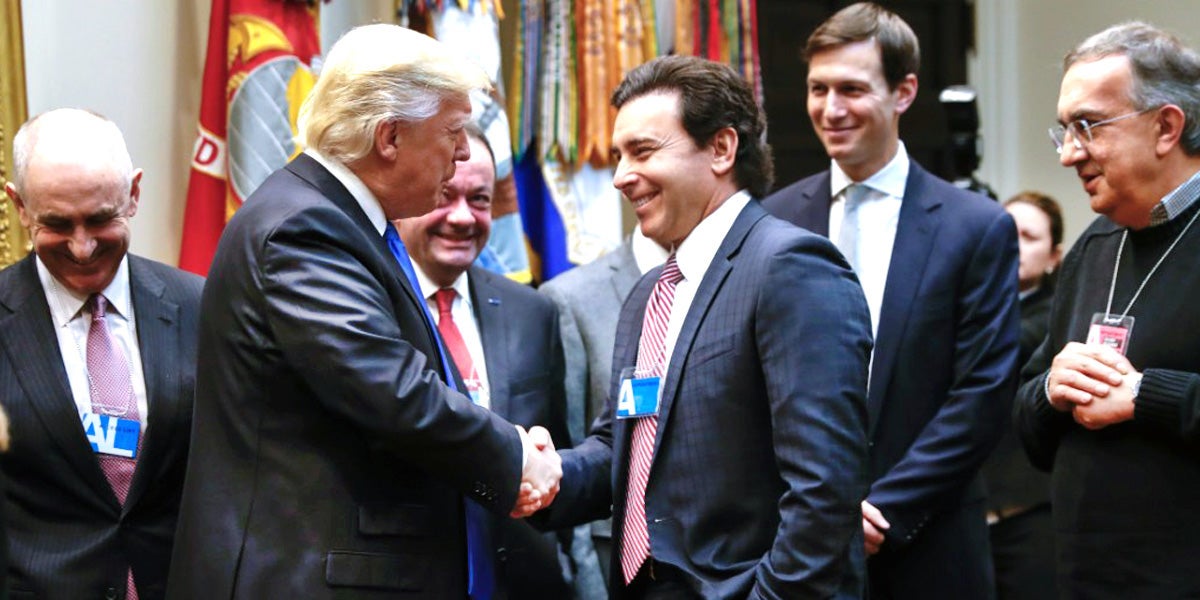 Trump meets with CEOs of GM, Ford, Fiat and Chrysler.

The oil industry and its “deep state” allies in the Trump administration have lured U.S. auto companies into a potentially fatal political trap, chumming Detroit by tapping into the deeply embedded penchant of the Big Three for chasing short-term market trends at the expense of long term value.

Excited by the arrival of a Big Oil ally, Scott Pruitt, to head the U.S. Environmental Protection Agency (EPA), the auto industry asked the Trump administration to undo the recent Obama Administration rule locking long term, reliable standards for emissions and fuel economy. The industry argued that the standards, which it agreed to back in 2009 as part of the auto bail-out, were now too onerous because consumers were shifting to buy SUV’s again with lower oil prices. The argument is utterly bogus. The 2009 rules set separate, if ambitious, standards for each size class of vehicle, so while more SUV sales do drive up average emissions and oil consumption, they do not require the companies to make a single vehicle to a higher standard than they agreed to.

What’s really at stake here is the pace of vehicle electrification. Meeting the 2009 standards for each vehicle class was always dependent on a significant portion of those vehicles being zero-emission electric drive. That’s an existential threat to the oil industry—and in many ways to Detroit’s dealers, who make most of their money repairing the drive trains of internal combustion cars. Electric drive vehicles (EV) have a fraction of the maintenance costs of gas or diesel.

But a rapid deployment of electric drive cars is vital to the long term global viability of automobile manufacturers. Whatever happens in the U.S., global auto markets are going electric and the Big Three need a major U.S. EV market to compete in the 21st century.

A few days before the Trump administration announced that—surprise, surprise—it was giving the auto industry everything it had asked for and more, not only waiving the post 2022 economy standards but also seeking to strip California of its historic right to set its own vehicle emissions rules, I attended a high level strategy session in New Delhi devoted to the future of India’s auto fleet. If Detroit had been listening it might have realized the folly of resuming its servile junior partner status with oil.

The message could not have been clearer. Minister after Minister—roads, industry, rail, urban development—proclaimed India’s urgent need for “transportation without oil.” The government of India’s top planners made clear that they were uniformly committed to an all electric vehicle economy by 2030, a step which would dry up the oil industry’s biggest remaining growth target. It would also shut off the world’s fastest growing automotive market to U.S. manufacturers if they continue to rely on internal combustion engines.

India’s domestic ride-hailing service, Ola, announced a partnership with Indian auto maker Mahindra to test electric taxis. The government indicated it would suspend the permit process for electric vehicles, as the City of Beijing has already done, giving electric car ownership a big boost. Toyota boasted that 46 percent of the Camry’s sold in India are already hybrids or electrics. The electric drive train has already left the station. With China already far down the electric vehicle pathway, Europe being forced onto it by air pollution problems and India trying to leap-frog both, an auto industry that continues to rely on 20th century technology will rapidly become a 20th century relic.

Why would U.S. auto companies, like General Motors with its big—and bold—bet on the ground-breaking electric Bolt, give up the level playing field and predictability which the 2022 emission and economy rules had given them in 2009? Just as Trump was signaling that he will ease the requirements, Rob Threlkeld, global manager of renewable energy for General Motors, said the automaker is pushing to source all of its power from clean sources by 2050 because that’s what consumers want. Why would manufacturers choose a strategic pathway so clearly at odds with where world auto markets are going?

Why would they pick such a big fight with their biggest domestic market. California, joined as it is by a bevy of other states seeking cleaner and cheaper transportation options? Well, dealership pressure is one reason. Dealers hate EV’s, because they don’t break down and don’t fatten their service departments. Another is that the auto industry’s lobbying apparatus thrives on the message, “the government is out to hurt you. Fight back!” (After all, if Government Affairs departments concede the reality that government regulations have been, net, good for the industry, keeping it competitive with the German and Japanese manufacturers, what’s the argument for fat lobbying budgets?)

From 2004 to 2008, as oil prices soared, Detroit clung to its SUV dependent business model, pronouncing that gasoline prices could never reach the $2.50 mark at which customers starting seeking fuel economy. When that marker was crossed in 2006, Chrysler and GM headed for bankruptcy, Ford for massive debt and value loss and the U.S. industry almost went away except for the Obama administration rescue.

Now, just as happened in that era, the auto industry is once again barreling towards long-term bankruptcy for short-term relaxation of standards. What can rescue Detroit from its own death wish?

Primarily California and its allied states, (Connecticut, Maine, Maryland, Massachusetts, New Jersey, New York, Oregon, Rhode Island and Vermont), which have adopted their own version of the 2022 fuel efficiency rules and an electric vehicle mandate to go with it. Representing 30 percent of the U.S. auto market, these states alone can drive Detroit to remain competitive in the electric drive segment. While the Trump administration appears ready to deny California the waiver which enables it to maintain its own rules, there will be a major legal battle in the courts over whether the federal government can revoke a waiver once it has been issued. And even if, in the short turn, the Trump administration prevails, California and its allies can make clear that once political attitudes in Washington change, as they always do, that the next round of economy and emissions standards will be much, much tougher than those Detroit is seeking to weaken today. The 2022 rules were very much a compromise—and with foreign manufacturers racing to electrify, California holds a much stronger long term hand than Detroit.

So what the auto companies and auto workers and auto communities, all ought to be praying for is that the Trump administration’s ploy to reinforce Detroit’s dependence on oil fails—because the courts uphold state’s rights and California’s ability to insist that the auto industry remain globally competitive.