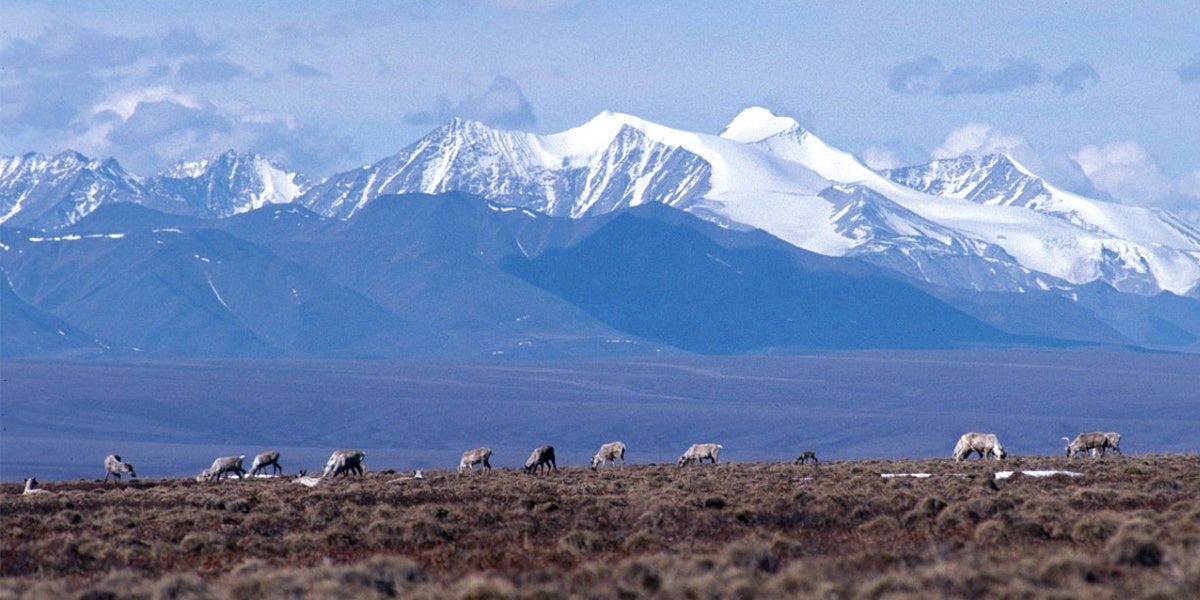 Caribou graze on the coastal plain of the Arctic National Wildlife Refuge, with the Brooks Range as a backdrop. USFWS / Flickr

The political battle over whether to open the Arctic National Wildlife Refuge (
ANWR) for oil and gas exploration has raged for decades. Despite the majority of Americans opposing drilling in ANWR, pro-drilling Republicans have tried more than 50 times open up the pristine wilderness to energy development.

But
President Trump was apparently indifferent to the matter until an oil industry friend told him that past presidents, including conservative icon Ronald Reagan, couldn’t get drilling done.

“I never appreciated ANWR so much,” Trump said Thursday during a speech at a Republican retreat in West Virginia. “A friend of mine called up who is in that world and in that business. He said, ‘Is it true that you’re thinking about ANWR?’ I said ‘Yeah, I think we’re going to get it but you know …’ He said, ‘Are you kidding? That’s the biggest thing by itself. Ronald Reagan and every president has wanted to get ANWR approved.’ And after that I said ‘Oh, make sure that is in the bill. It was amazing how that had an impact.”

Congress lifted a 40-year drilling ban on the refuge after the Republican tax reform bill was approved in December. This ”
backdoor drilling provision,” as environmentalists have dubbed it, was added to the tax reform package to secure the key vote of Alaska Sen. Lisa Murkowski, who introduced the measure and has long championed the cause.

Trump’s remarks, however, implied that he was the driving force behind the provision’s inclusion.

“I really didn’t care about it,” he said. “Then when I heard that everybody wanted it, for 40 years, everybody tried to get it approved, ‘Make sure you don’t lose ANWR.'”

The Arctic National Wildlife Refuge, the largest
protected wilderness in the U.S., consists of more than 19 million acres of pristine landscapes and is home to 37 species of land mammals, eight marine mammals, 42 fish species and more than 200 migratory bird species.

Republicans have targeted the so-called 1002 area on the Prudhoe Bay in Northern Alaska, which has an estimated 12 billion barrels of recoverable crude.

“It’s clear from President Trump’s remarks that jamming Arctic Refuge drilling in the tax bill was always about politics and not a thoughtful energy policy,” Kolton said. “President Trump should care that he signed a bill reversing not a Democratic policy, but protections that date back to Republican presidents Dwight Eisenhower and Teddy Roosevelt. This is a retreat from the GOP great conservation legacy.”

“Donald Trump might not care but millions of Americans do, and always have,” he continued. “They care about protecting our last great wilderness. They care about the subsistence culture of the Gwich’in people whose way of life is now threatened. And they care about the polar bears, caribou and millions of migratory birds in this cherished landscape. They also care about the future of our climate, and do not want to see us squeeze every drop of oil out of our national parks and refuges just to increase our exports to places like China.”

But Trump might care about ANWR more than he let on. After the speech, Alaska Sen. Dan Sullivan (R) told Alaska Public Media that the president has cared about ANWR since at least last March. He and Sen. Murkowski even briefed Trump for nearly an hour on state issues and their request to open the refuge to drilling.

“After that meeting,” Sullivan said, “Seeing him in different settings and stuff, a number of times, a number times, he would ask, ‘Hey Dan, how are we doing on ANWR? We going to get that done?'”