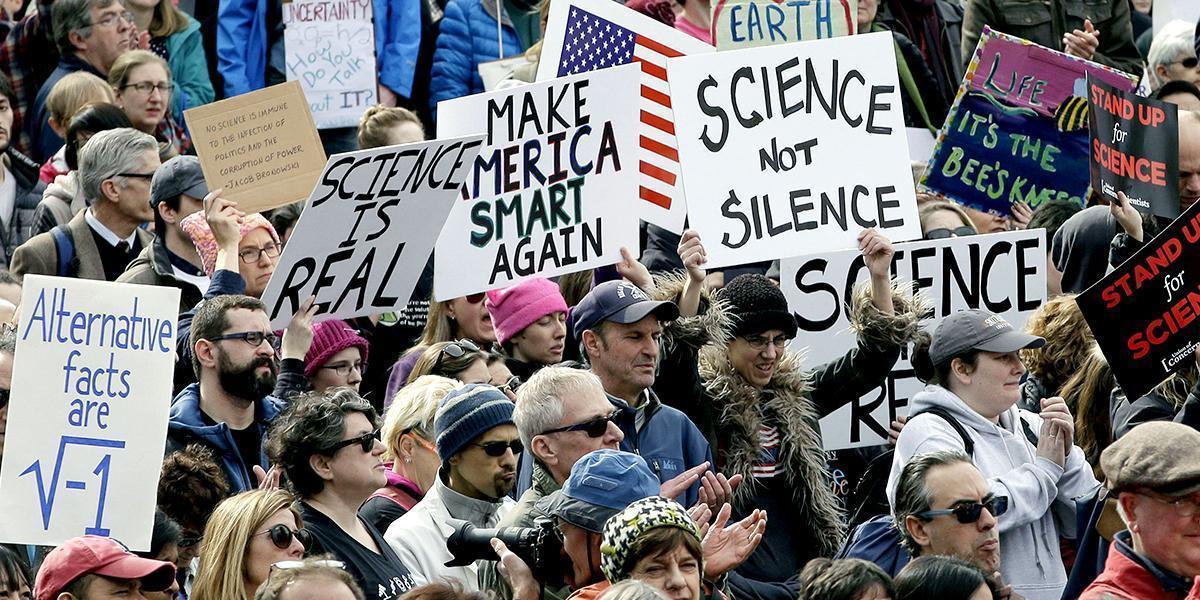 Since Donald Trump was elected, there has been an assault on the pillars of what many would be considered a free and fair democratic society: the right to protest and the right to free speech.

As millions stand up for science, for women’s and LGBT rights and for the climate, the authorities are trying to crack down on peaceful dissent, leading one commentator to argue that there is a now a “free speech crisis in America.”

Many veterans of protests will argue that we have been here before. Indeed, I wrote a book more than 25 years ago, titled Green Backlash, that looked at how the authorities were trying to silence environmental activists. But these are dark days again, with a country-wide attack on civil rights.

According to the American Civil Liberties Union (ACLU), more than 30 separate anti-protest bills have been introduced in the country since Nov. 8 last year, in “an unprecedented level of hostility towards protesters in the 21st century.”

Many of these have been introduced in states such as North Dakota, where indigenous activists spent months fighting the controversial Dakota Access pipeline.

The Guardian reported that more than 20 states have proposed bills that would “crack down on protests and demonstrations” since Trump was elected.

One bill under consideration in Tennessee could effectively allow a driver to legitimately run over a protester “who is blocking traffic in a public right-of-way if the driver was exercising due care.”

Meanwhile, in Oklahoma, a new bill deliberately aimed at stopping protests against the oil and gas industry and other “critical infrastructure” was sent to the governor to sign at the end of last month.

According to a report in the Intercept, the Oklahoma law “is unique … in its broad targeting of groups ‘conspiring’ with protesters accused of trespassing. It takes aim at environmental organizations Republicans have blamed for anti-pipeline protests that have become costly for local governments.”

Under the newly signed law, any person who even enters property containing “critical infrastructure” without permission could face a fine of not less than $1,000 or six months in jail. Intent to “willfully destroy” or “impede or inhibit operations of the facility” means the person faces a fine of $10,000 or one year in jail. Should someone be convicted of causing damage, they face a fine of $100,000.00 or 10 years in jail.

As the Intercept noted, “Significantly, the statute also implicates any organization ‘found to be a conspirator’ with the trespasser, threatening collaborator groups with a fine ‘ten times’ that imposed on the intruder—as much as $1 million in cases involving damage.”

It is not surprising that the Oklahoma Oil and Gas Association supports the legislation.

Another bill which recently passed the Oklahoma House of Representatives would not only seek damages from someone caught trespassing, but also, “A person or entity that compensates or remunerates a person for trespassing … may also be held vicariously liable for any damages to personal or real property committed by the person compensated or remunerated for trespassing.”

It is currently unclear what “compensated” actually means and whether it is a way of trying to undermine more mainstream environmental organizations who have offered some kind of background support to protesters.

This has been widely condemned: Johnson Bridgwater, head of the Oklahoma chapter of the Sierra Club, told the Intercept, “There is a strong and real fear that this could be used as an attempt to crush a group or a chapter of Sierra Club unfairly … We see all of these bills as nothing more than corporate America being fearful of how successful the Standing Rock protests were.”

UN experts have branded the bills being introduced across the country as “incompatible with U.S. obligations under international human rights law.” David Kaye and Maina Kiai, from the Office of the High Commissioner for Human Rights, argue that some specific pieces of legislation are “criminalizing peaceful protests.”

The ACLU and National Lawyers Guild also believe that many of the bills violate the U.S. Constitution.

Vera Eidelman from the ACLU told the Guardian, “This flood of bills represents an unprecedented level of hostility towards protesters in the 21st century. And many of these bills attack the right to speak out precisely where the Supreme Court has historically held it to be the most robust: in public parks, streets and sidewalks.”

Meanwhile, dozens of people who were innocently watching Trump’s inauguration have now been charged with multiple felonies, including journalists and people just holding banners. Art Spitzer, legal director of the ACLU in Washington, DC, argued, “To the extent the government is prosecuting people who were not breaking any law, of course it will have a chilling effect on participation in protest.”

And that is what Trump and others want: to chill people into silence.