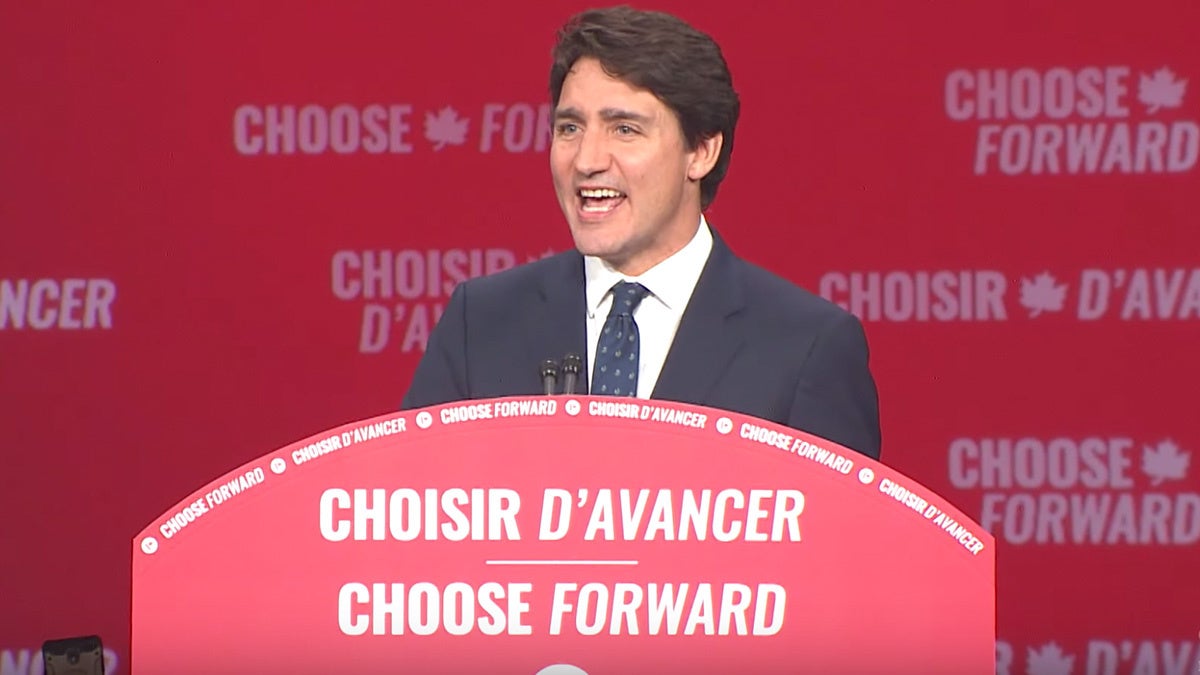 Justin Trudeau gives a speech following a victory in his Quebec riding of Papineau on Oct. 22. CBC News / YouTube screenshot

Canadian Prime Minister Justin Trudeau will remain in office after a federal election Monday in which the climate crisis played a larger role than ever before.

Trudeau’s Liberal Party did not win a majority of seats in Canada’s House of Commons, but it did win enough seats to form a government, The New York Times reported. According to the most recent live results from CBC News, Trudeau’s Liberals control 157 seats, the opposition Conservative Party controls 121, the Bloc Québécois controls 32, the New Democratic Party (NDP) controls 24, and the Green Party controls three.

“Thank you, Canada, for putting your trust in our team and for having faith in us to move this country in the right direction,” Trudeau tweeted after the election was called. “Regardless of how you cast your vote, our team will work hard for all Canadians.”

Trudeau will not choose permanent coalition partners, but will reach out to smaller parties to pass individual pieces of legislation, The Guardian explained. This will likely make the left-wing NDP an important ally on issues like health care and climate policy. Ahead of the election, Pembina Institute Director of Policy Isabelle Turcotte told Climate Home News that such a scenario could “see the potential for some pretty big moves on climate.”

Immediately after the election, Greenpeace Canada moved to activate that potential by asking Canadians to spam Trudeau by phone, email and social media and demand he announce a “climate emergency response plan” within 48 hours. That plan would include zeroing out emissions before 2050, setting interim targets for 2025 and 2030, providing good jobs to all Canadians, ending fossil fuel subsidies and projects like the Trans Mountain Pipeline expansion and putting indigenous rights before the interests of extractive industries.

During his first term, Trudeau had a mixed record on environmental issues, as The Guardian explained. He instituted a carbon tax, but also purchased the Trans Mountain Pipeline and approved its expansion one day after Canada declared a climate emergency.

However, his pre-election platform upped his climate ambition and called for net zero emissions by 2050, with legally-binding five-year targets along the way. The Conservative Party, on the other hand, wanted to repeal the carbon tax and focus on funding technological solutions with green bonds.

Climate was a top-three issue for nearly 30 percent of Canadians this election, Global News reported. Despite this, the Green Party did not see a major uptick in votes, though it did have its best election yet.

University of British Columbia political science professor Kathryn Harrison said this was probably because the Liberal Party and the NDP also campaigned on climate.

“I think in part they stole the Greens’ thunder,” Harrison told Global News.