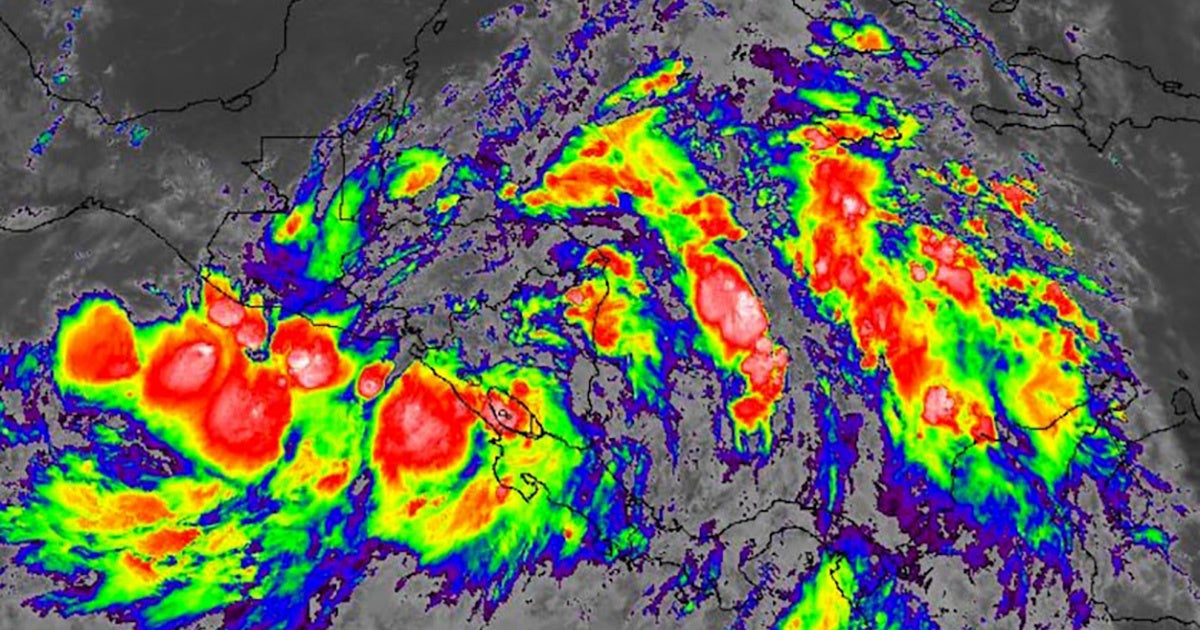 Tropical Storm Nate formed at 8 a.m. EDT Thursday morning in the Southwestern Caribbean near the coast of Nicaragua, and is bringing torrential rains to portions of Nicaragua and Costa Rica as it moves northwest at 9 mph. Nate will be a significant rainfall threat to Central America over the next two days, and is likely to threaten Mexico’s Yucatan Peninsula as a tropical storm or Category 1 hurricane on Friday, and arrive on the U.S. Gulf Coast this weekend as a hurricane. 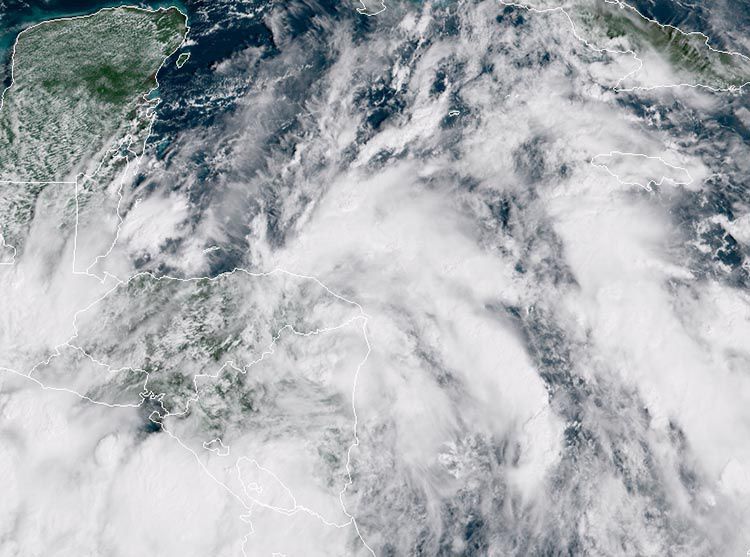 Nate made landfall over northeastern Nicaragua late Thursday morning as a tropical storm with 40 mph winds, and tropical storm warnings are up for much of the coast of Nicaragua and Honduras. However, the main danger to Central America from Nate will be torrential rains: 15 – 20″ in Nicaragua, 5 – 10″ in Panama and Costa Rica, and 4 – 8″ in Honduras and the eastern Yucatan Peninsula. Much of the heavy rain in Nicaragua, Coast Rica and Panama will occur on the Pacific side, as Nate’s large circulation pulls moisture from the Pacific across Central America and into the Southwest Caribbean. Satellite rainfall estimates show that the heaviest rains from Nate thus far have been on the Pacific side of Costa Rica and Panama, where more than 8″ of rain has fallen over the past 7 days. A personal weather station on the Pacific coast of Nicaragua recorded 3.34″of rain in the 12 hours beginning at 6 p.m. Wednesday. 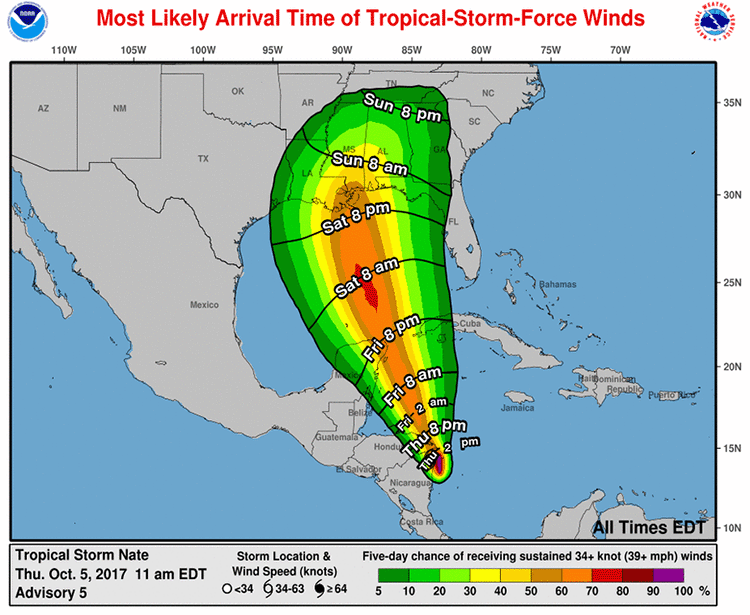 Satellite imagery early Thursday afternoon showed that although the intensity of Nate’s heavy thunderstorms had waned slightly after the center made landfall, the overall structure of the storm was holding together, with the low-level spiral bands remaining prominent. Conditions were favorable for development, with moderate wind shear of 10 – 20 knots, sea surface temperatures (SSTs) a very warm 30°C (86°F) and an unusually moist atmosphere with a mid-level relative humidity of 85 percent.

University of Miami Rosenstiel School of Marine and Atmospheric Science

Figure 3. Ocean Heat Content (OHC) for Oct. 5. Forecast positions for Nate from the 11 a.m. EDT Thursday NHC forecast are also shown. OHC values in excess of 80 kilojoules per square centimeter (yellow-green colors) are often associated with rapid intensification of hurricanes. Nate is expected to be passing near or over two areas of very high ocean heat content, with very warm waters that extend to great depth: in the Western Caribbean off the coast of Yucatan Peninsula, and again in the Gulf of Mexico, over the northern portion of the Loop Current, where a warm eddy appears to be attempting to break off.

Once Nate finishes its traverse of northeastern Honduras on Thursday evening and emerges into the Western Caribbean, the storm will be in a very favorable environment for intensification. The 12Z Thursday run of the SHIPS model predicted that wind shear would be low to moderate, 5 – 15 knots, through Saturday. SSTs will be a very warm 30°C (86°F), and Nate will have an unusually moist atmosphere, with a mid-level relative humidity of 80 – 85 percent. Nate will be passing over an area of very high ocean heat content (OHC) in the Western Caribbean, with very warm waters that extend to great depth. Since Nate is unlikely to emerge from Honduras as a well-organized system, it will probably take the storm about 12 hours to get organized and take full advantage of these favorable conditions.

The Thursday morning runs of our top five intensity models showed modest intensification of Nate on Thursday evening through Friday evening, with none of the models predicting that Nate would be a hurricane when it makes its closest approach to Cozumel and the northeastern tip of Mexico’s Yucatan Peninsula on Friday night. However, the 12Z Thursday SHIPS model Rapid Intensification Index gave Nate a 40 percent chance of being a Category 1 hurricane with 75 mph winds by 8 a.m. Friday, 12 hours before it will make its closest pass to the Cozumel/Cancun area. The way this hurricane season has gone, it is safer to predict intensification at the upper end of what our intensity models are predicting, and residents and visitors in Cozumel/Cancun should expect that Nate will be a Category 1 hurricane Friday evening when it makes its closest pass.

A hurricane watch and tropical storm warnings are now in effect for the resort cities of Cancun and Cozumel and other parts of the northeast Yucatan. Nate’s rains will not be as heavy here as in Central America, but local totals of 12″ or more are possible. High tide at Cozumel and Cancun is at 9:37 p.m. CDT Friday, and it will be one of the highest high tides to the year, due to the full moon. Tidal range at Cozumel/Cancun between low and high tide is only about 0.6 – 0.8 feet (.18 – .25 meters), so the timing of Nate’s storm surge with respect to the high tide is less important than we see for most locations along the U.S. coast.

Interaction with the flat terrain of the Yucatan may have little impact on Nate’s strength, but it is also possible that passage over the Yucatan will disrupt the storm’s core and halt strengthening for a half-day or so. As Nate begins moving away from the Yucatan Peninsula early Saturday, it will be moving into a zone of much stronger upper-level steering, which will pull the storm to the north or north-northwest at an accelerating rate. Nate is expected to cross the Gulf of Mexico in 24 to 30 hours, an unusually rapid clip. Nate’s potential strengthening will be blunted by the wind shear associated with the strong steering flow, as well as by the rapid motion itself, which will limit its time over water. As Nate approaches the Gulf Coast, it will encounter cooler SSTs and a lower oceanic heat content, which may slow or halt intensification. 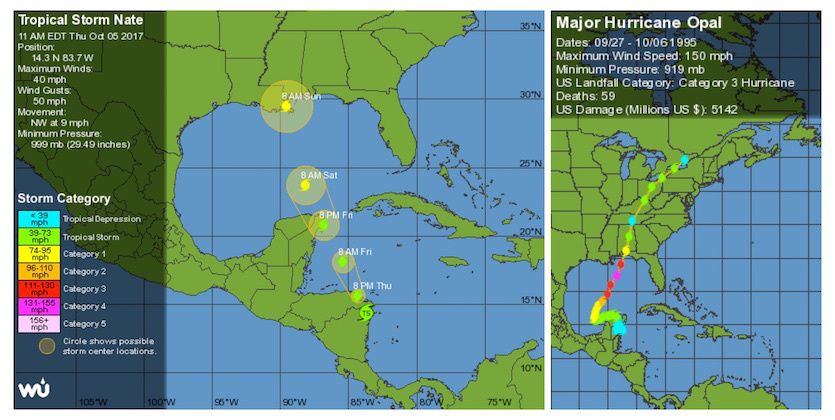 Figure 4. Left: Weather Underground depiction of NHC’s 3-day forecast for Tropical Storm Nate from 11 a.m. EDT Oct. 5. Right: Hurricane Opal strengthened from Category 1 to 4 in October 1995 as it raced toward the central Gulf Coast after spending about 24 hours just offshore from the Yucatan Peninsula. Nate is not expected to linger near the Yucatan.

In October 1995, Hurricane Opal rocketed from Category 1 to high-end Category 4 strength while moving from just west of the Yucatan to the Florida Panhandle in about 24 hours (see Figure 4 above). However, Opal lingered and organized for roughly a day just off the Yucatan before starting its northward charge. Nate is unlikely to be as well structured as Opal when it starts its quick northward trek. Our best intensity guidance, including the HWRF and HMON models, suggest that Nate will reach the central U.S. Gulf Coast as a Category 1 or perhaps Category 2 hurricane. These are the most likely outcomes, although it is too soon to rule out the possibility that Nate could become a major hurricane if it moves slowly enough over the southern and central Gulf, where SSTs are above 29°C (84°F). The increasing upper-level southerly winds may also provide an outflow channel for Nate, which would facilitate intensification. The SHIPS model Rapid Intensification Index from 12Z Thursday morning showed a 48 percent chance of Nate gaining 65 knots of strength by Sunday, which would bring it to the Category 3 threshold (115 mph winds.) Whatever its strength, Nate will be approaching the Gulf Coast unusually quickly, so residents should take this rapid speed into account. 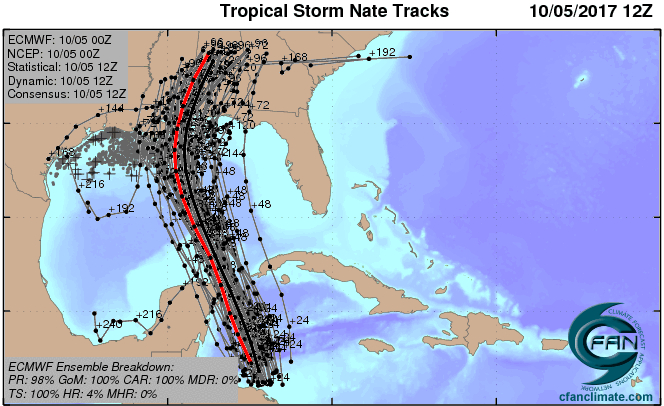 Figure 5. The 0Z Oct. 5 track forecast by the operational European model for Nate (red line, adjusted by CFAN using a proprietary technique that accounts for storm movement since 0Z), along with the track of the average of the 50 members of the European model ensemble (heavy black line), and the track forecasts from all 50 members of the ensemble. While there was still substantial spread among the Euro ensemble members, the most favored outcome was a landfall between southeast Louisiana and Alabama. 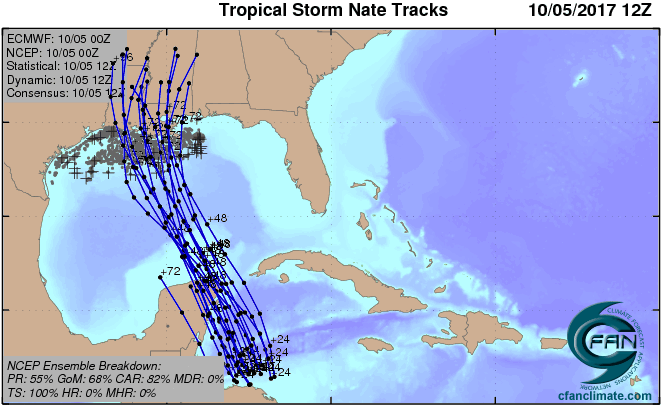 Figure 6. The 0Z Oct. 5 track forecast by the members of the GFS model ensemble. Only about two-thirds of the GFS ensembles brought Nate into the Gulf of Mexico as a tropical storm, and none brought Nate to hurricane strength.

Models agree that Nate will make landfall between late Saturday night and midday Sunday, most likely somewhere between southeast Louisiana and the western Florida Panhandle. There was a significant shift west in the model consensus on Wednesday night: The European and other models fell into line with the GFS, which had been calling for a more leftward track into far southeast Louisiana. This is a good time to keep in mind that even a superior model overall (such as the Euro) may not be the best model on any given storm or on any given day. The Euro and GFS aren’t so much like a pro baseball pitcher and a high-school pitcher; they are more like two excellent pro pitchers, one of whom has slightly better stats, but either of whom might pitch the better game next Saturday night.

Storm surge is a particular concern with Nate. Much of the stretch of the central Gulf Coast from southeast Louisiana to the western Florida Panhandle is quite vulnerable to storm surge. Exact surge values will depend on Nate’s strength and specific track, but it’s not too soon for coastal dwellers to be aware of the risk and to begin preparing for it. Although the range between low and high tide is not extremely large along the central Gulf Coast, some of the highest astronomical tides of the year will be occurring this weekend into early next week. From Biloxi to Pensacola, high tide occurs around midnight, with the main low tide in the morning. If Nate moves as fast as some models are projecting, it could arrive during the high part of this cycle early Sunday. Because Nate will be moving so quickly, its surge impact is unlikely to extend beyond one tidal cycle.

By the time Nate reaches the U.S., its quick movement will help limit the risk of extreme rainfall totals. A swath of 3 – 6″ can be expected within about 150 miles of Nate’s center, from the Gulf Coast north across the Appalachians to parts of New York and/or New England.

Figure 7. 7-day precipitation outlook for the period from 8 a.m. EDT Oct. 5 to Oct. 12. The exact placement of the band of heavy rain associated with Nate over the eastern U.S. will hinge on Nate’s eventual motion.