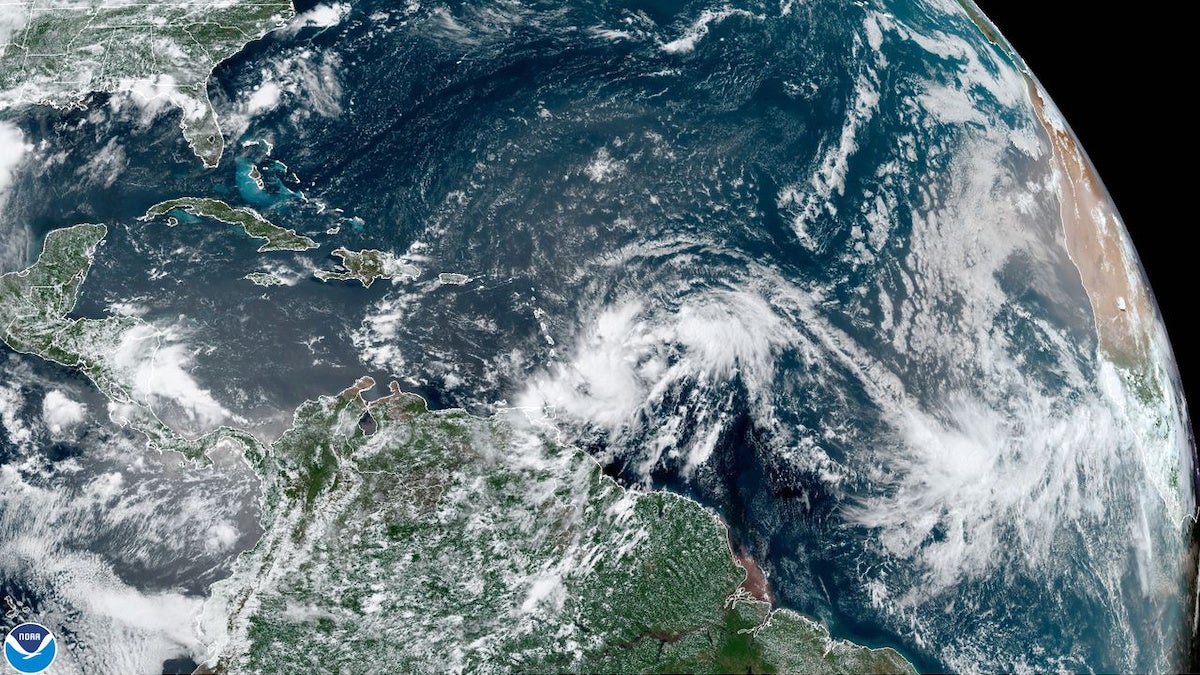 The system that could develop into Tropical Storm Isaias, as seen on July 28. NOAA

Tropical storm warnings were issued for Puerto Rico and much of the Eastern Caribbean Tuesday as a disturbance is expected to become the ninth named tropical storm of the Atlantic hurricane season Wednesday.

The system looks set to continue 2020’s run as a record-breaking hurricane season. If it develops into Tropical Storm Isaias, it will be the earliest “I” storm on record, CNN reported. The previous record was set Aug. 7 in 2005, currently the most active Atlantic season on record. 2020 has already reached eight named storms earlier than any other season, Colorado State University Meteorologist Philip Klotzbach said on Twitter.

“[A] a tropical storm is forecast to form later today,” the National Hurricane Center (NHC) wrote in an update at 5 a.m. Atlantic Standard Time.

The system, currently dubbed “Potential Tropical Cyclone Nine,” is already generating tropical-storm-force winds of 45 miles per hour. However, it is not a tropical storm yet because it does not circulate around a round center, CNN meteorologist Chad Myers explained.

“When a circular center finally forms, that is when it will be called a tropical storm,” he said.

PTC9 is a large system with convection spanning roughly 1000 miles from SW to NE –– The elongated and open center of circulation is making this system very difficult to forecast at the moment. Where the closed center forms will make a big difference in strength and trajectory. pic.twitter.com/uhN6VTqXpc

The system is currently located 385 miles from San Juan, Puerto Rico, according to the NHC. It is moving west-northwest at about 23 miles per hour and is expected to move over the southern Leeward Islands early Wednesday and reach the Virgin Islands and Puerto Rico Wednesday night. It is then expected to pass near or over Hispaniola Thursday and near or over the southeastern Bahamas Friday.

In addition to wind, the storm threatens to dump three to six inches of rain over Puerto Rico, the Dominican Republic, northern Haiti, the Turks and Caicos, the northern Leeward Islands and the British and U.S. Virgin Islands. It could also dump four to eight inches of rain over the Inagua Islands.

“These rainfall amounts could lead to life threatening flash flooding and mudslides, as well as potential riverine flooding,” the NHC warned.

Another danger are life-threatening swells and rip tides, which will reach the Leeward Islands, Puerto Rico and the Virgin Islands over the next two days and the Dominican Republic, Turks and Caicos Islands and the southeastern Bahamas Thursday.

Here are the Key Messages for Potential Tropical Cyclone Nine early on Wednesday morning. The full forecast is at https://t.co/tW4KeFW0gB pic.twitter.com/A5fWlrUnhC

The warning comes as Puerto Rico continues to recover from 2017’s devastating Hurricane Maria, the Miami Herald pointed out. That storm wiped out the island’s power grid—it took nearly 11 months after the storm to restore power to all homes. Officials are worried about the impact any future storms will have. More than 450,000 Puerto Ricans briefly lost power Tuesday because a plant went offline, The Associated Press reported. The cause is not yet known.

The storm also comes as Puerto Rico battles a spike in coronavirus cases.

Puerto Rico Gov. Wanda Vázquez said during a press conference that there were more than 300 shelters and more than 130,000 face masks ready for storm evacuees.

“We’ve lived through several emergencies at one time,” she said. “I want you to remain calm.”

Here's a possible view of TS #Isaias about 36 hours from now, via the latest HWRF model. A strong tropical storm passing through the Virgin Islands.

Folks, take Isaias very seriously. It's time to give your family and friends in Puerto Rico and the islands a call to check in. pic.twitter.com/8YTVZZcWgz

There is a chance the storm could impact Cuba, the Bahamas and Florida by the end of the week, according to the NHC. If so, it could be another blow to the Bahamas after last year’s damaging Category 5 Hurricane Dorian, the Miami Herald pointed out. However, the path of the storm is still unpredictable.

“The details of the long-range track and intensity forecasts are more uncertain than usual since the system does not have a well-defined center and it could move over portions of the Greater Antilles later this week,” the NHC wrote early Wednesday.