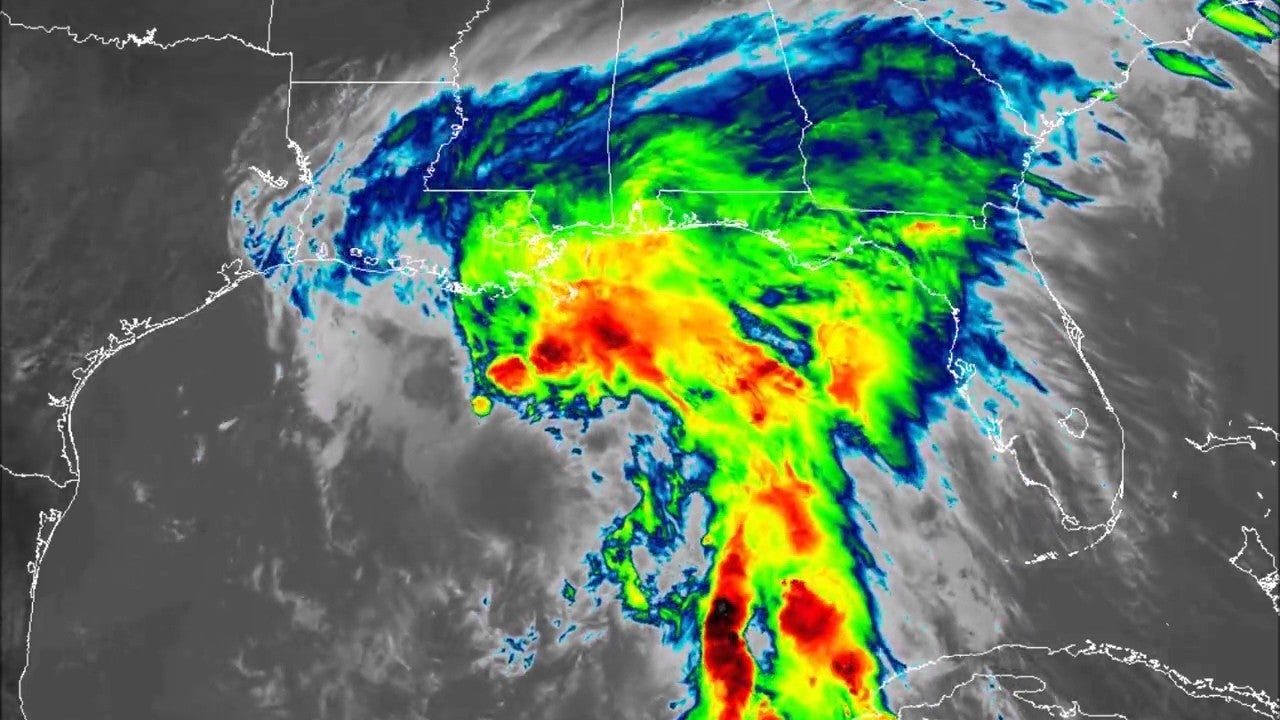 A high risk of life-threatening flooding continues on Wednesday over parts of the central Gulf Coast as Tropical Storm Cindy lumbers toward shore. The greatest flood threat will be across low-lying areas of far southern Mississippi and Alabama, according to the NWS/NOAA Weather Prediction Center. A second area with a moderate flood risk lies across far southeast Texas and southwest Louisiana.

As of 8 a.m. EDT Wednesday, Cindy was centered about 200 miles southeast of Galveston, TX, moving northwest at 8 mph. Cindy’s top sustained winds were estimated at 60 mph. Models are in general agreement that Cindy will continue northwest and gradually arc northward. The official outlook from the NOAA/NWS National Hurricane Center early Wednesday brought Cindy ashore near the Texas/Louisiana border on Thursday afternoon. Tropical storm warnings were in effect from San Luis Pass, TX, to the Alabama/Florida border, including metropolitan Houston and New Orleans. Most of the impacts from Cindy will be near or east of where its center makes landfall. 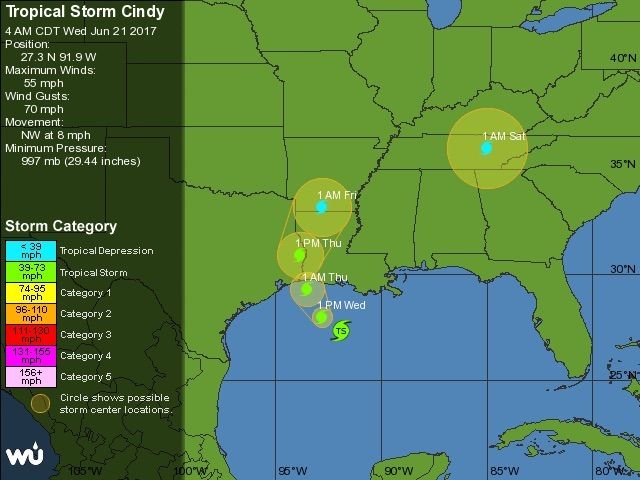 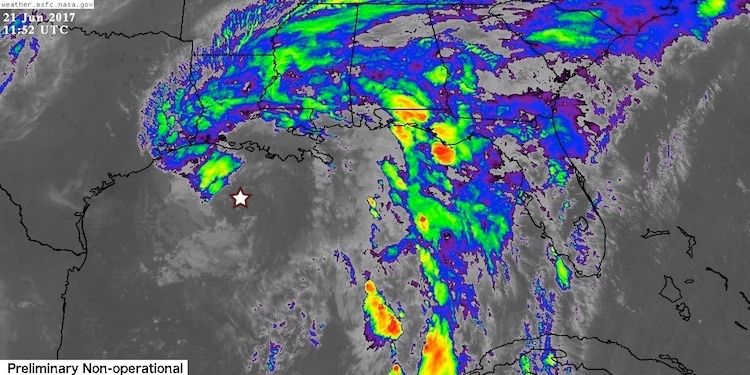 Figure 2: Enhanced infrared satellite image of Tropical Storm Cindy as of 7:52 a.m. EDT Wednesday, June 21, 2017. The location of Cindy’s center of circulation as of 8 a.m. EDT is shown by the star.NASA MSFC Earth Science Office

Satellite images of Cindy on Wednesday morning showed a disheveled, ragged-looking tropical storm, with showers and thunderstorms (convection) located mainly well north and east of a low-level circulation whose center was largely devoid of rainfall (see Figure 2).
“Cindy does not look much like a tropical cyclone on satellite images this morning,” acknowledged NHC forecaster Richard Pasch early Wednesday. Cindy’s convection was being shunted from its center by strong southwest wind shear of around 30 mph. That shear will remain strong through Wednesday, according to the SHIPS model, which should prevent Cindy from any further consolidation as it pushes toward land.

Tropical storms and depressions do not have to be super-organized or packed with fierce winds to cause plenty of trouble. Even a weak, slow-moving system can produce enormous amounts of rain and massive flooding. We saw this with 2016’s “no-name flood” across southeast Louisiana, a $10 billion disaster produced by a system that never even qualified as a tropical depression.

“Residents in South Louisiana are still cleaning up from this catastrophic flood, which inundated tens of thousands of buildings,” wrote storm surge expert Hal Needham in a blog post on Tuesday. “Last month I drove through Denham Springs, Louisiana, one of the worst impacted areas, and was saddened to see many people still cleaning up and living in trailers on their property. Let’s hope the forecasted heavy rains do not repeat flooding in these hardest-hit areas.” 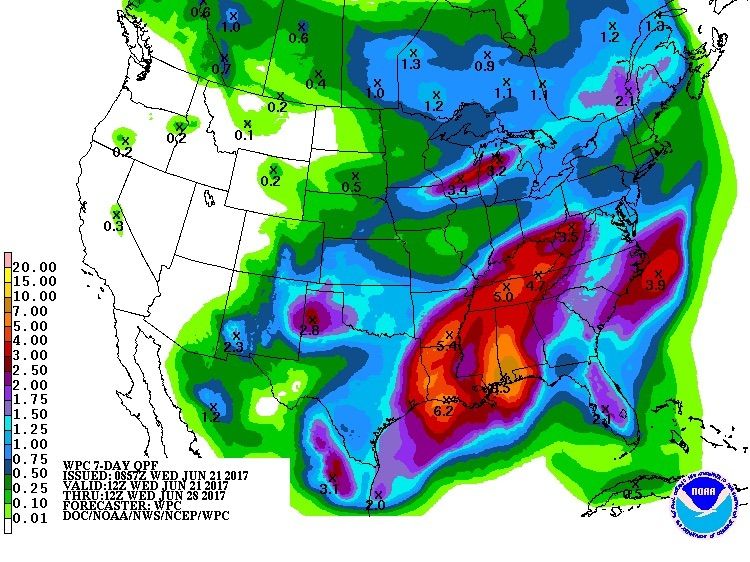 Fortunately, Cindy is not expected to produce the rainfall totals of more than 30″ observed in August 2016, but flooding may still be widespread and locally problematic. Many low-lying roads in the New Orleans area were under two to three feet of water early Wednesday, according to the local NWS office, and substantial flooding may persist through Thursday. Widespread rainfall of 3″–6″ had already occurred across the central Gulf Coast from bands of convection that swept inland from late Tuesday into Wednesday morning. One observer reported 6.11″ just west of Pensacola, FL, as of 5 a.m. CDT Wednesday.

Tornado watches were in effect across the central Gulf Coast on Wednesday morning, and the NOAA/NWS Storm Prediction Center has outlooked the area with a slight risk of tornadoes and other severe weather for Wednesday. A tornado was photographed off the coast of St. George Island, Florida, on Tuesday.

Winds gusted to 41 mph just after midnight Tuesday night at New Orleans International Airport. Cindy’s strongest remained mainly offshore as of Wednesday morning, and the threat of wind damage from Cindy is expected to remain on the low side even as the storm moves ashore on Thursday. As the remnants of Cindy migrate northward, they will eventually merge with a frontal system and slide across Kentucky and Tennessee, leading to as much as 6″ of rain in parts of those states from Friday into Saturday. 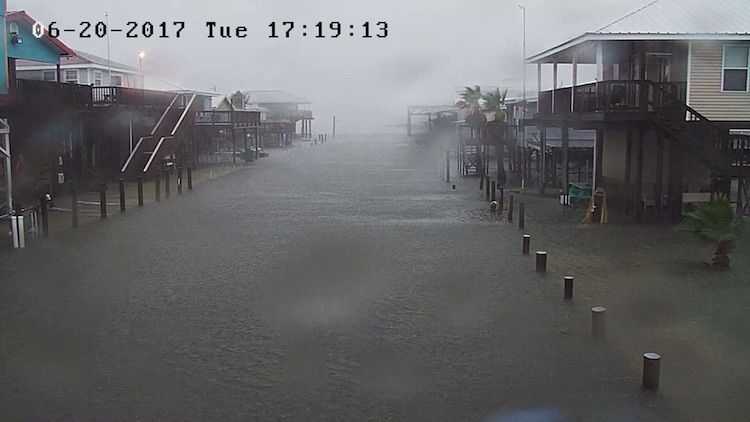 Reposted with permission from Weather Underground.