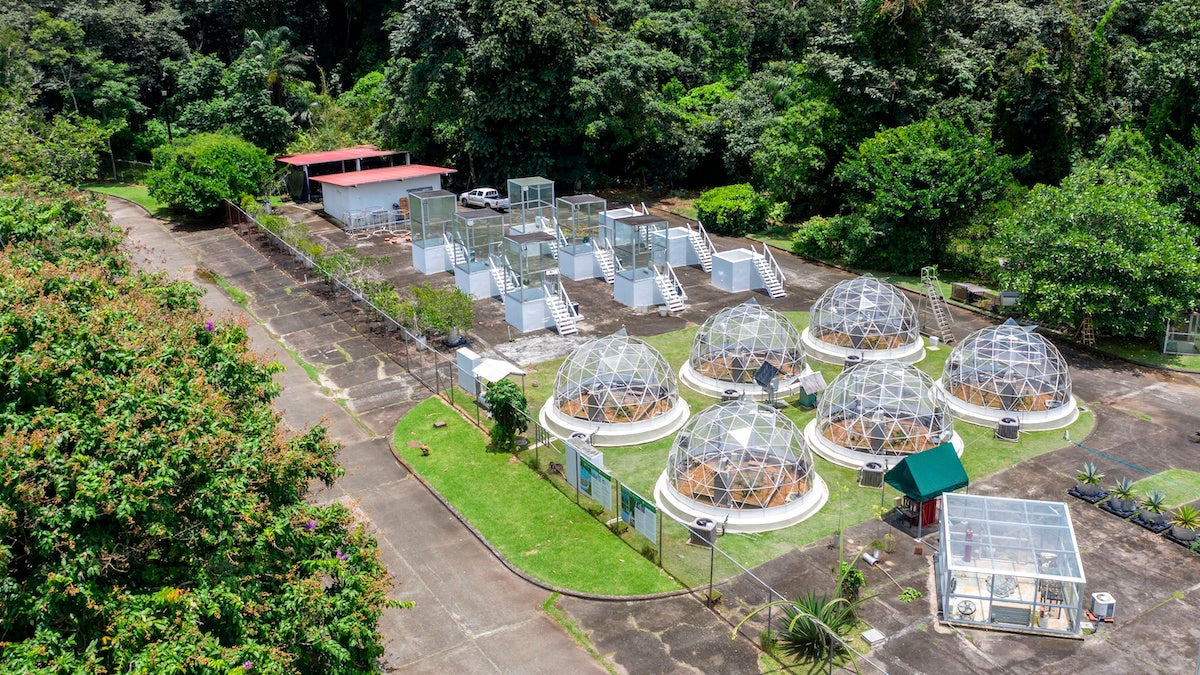 Aerial view of the Smithsonian Tropical Research Institute in Gamboa, Panama, where a new soil study was held, on Sept. 11, 2019. LUIS ACOSTA / AFP via Getty Images

One of the concerns about a warming planet is the feedback loop that will emerge. That is, as the planet warms, it will melt permafrost, which will release trapped carbon and lead to more warming and more melting. Now, a new study has shown that the feedback loop won’t only happen in the nether regions of the north and south, but in the tropics as well, according to a new paper in Nature.

Scientists warmed tropical soil to a level that was consistent with projections for how much the planet will warm up by the end of the century. When they heated the soil 4 degrees Celsius above pre-industrial levels, they found that the soil released 55 percent more carbon dioxide than the control soil, according to the paper, as Agence-France Presse (AFP) reported.

The takeaway is that tropical soils are far more sensitive to global heating than researchers had previously thought. It turns out that experimental evidence to confirm that long-held belief was missing.

“Soils form a living skin around the Earth,” said Andrew Nottingham, the paper’s lead author and a researcher at the University of Edinburgh in Scotland, as Cosmos Magazine reported. “They contain vast amounts of organic matter – more carbon is held in soils than is held in plants and the atmosphere put together.”

The complex carbon cycle has traditionally been held in balance by the earth’s soil, which contains a teeming ecosystem of microorganisms, bacteria, fungi and insects that counterbalance the carbon released by the dead leaves and decaying plants. However, at warmer temperatures, the microbes speed up their rate of digestion and respiration, which kicks more carbon into the atmosphere and away from the soil, according to The New York Times.

“The inputs of carbon to soils from plant detritus (dead wood, leaves and roots) roughly balance the losses to the atmosphere produced by the respiration of soil microorganisms that feed on that material,” wrote Eric Davidson, a researcher at the University of Maryland Center for Environmental Science, in a comment in Nature accompanying the study. “However, just a 1 percent imbalance of global soil-carbon effluxes over influxes would equal about 10 percent of global anthropogenic carbon emissions.”

The finding “is another example of why we need to worry more,” said Davidson, as The New York Times reported.

To conduct the experiment, Nottingham created a series of circular plots with electrical wires that he buried four-feet deep on a small island in Panama that houses the Smithsonian Tropical Research Institute. Over the course of two years, Nottingham used the wires to heat the soil by 6 degrees Fahrenheit, which is how much the tropics are projected to warm by 2100, according to current climate projections, as The New York Times reported.

That’s when Nottingham found that over the course of two years, the warming soil emitted 55 percent more carbon dioxide than the control soil. From there, the extrapolations begin. The researchers calculated that if a similar rise in temperature happened in the tropics around the globe in a two-year period between now and 2100, it would release the equivalent of 240 billion tons of CO2 into the atmosphere, according to Phys.org.

“That is more than six times the current annual emissions from human-related sources,” said Nottingham, as Phys.org reported. “This could be an underestimation, because we might see large continued loss beyond the two years in our experiment.”

“This is a very large response,” said Margaret Torn, an ecologist at Lawrence Berkeley Lab in California, who was not involved in the study and who runs a similar warming experiment in a California forest that reported a roughly 35 percent increase in carbon emissions after two years, to The New York Times. “It’s one of the largest I’ve heard of.”