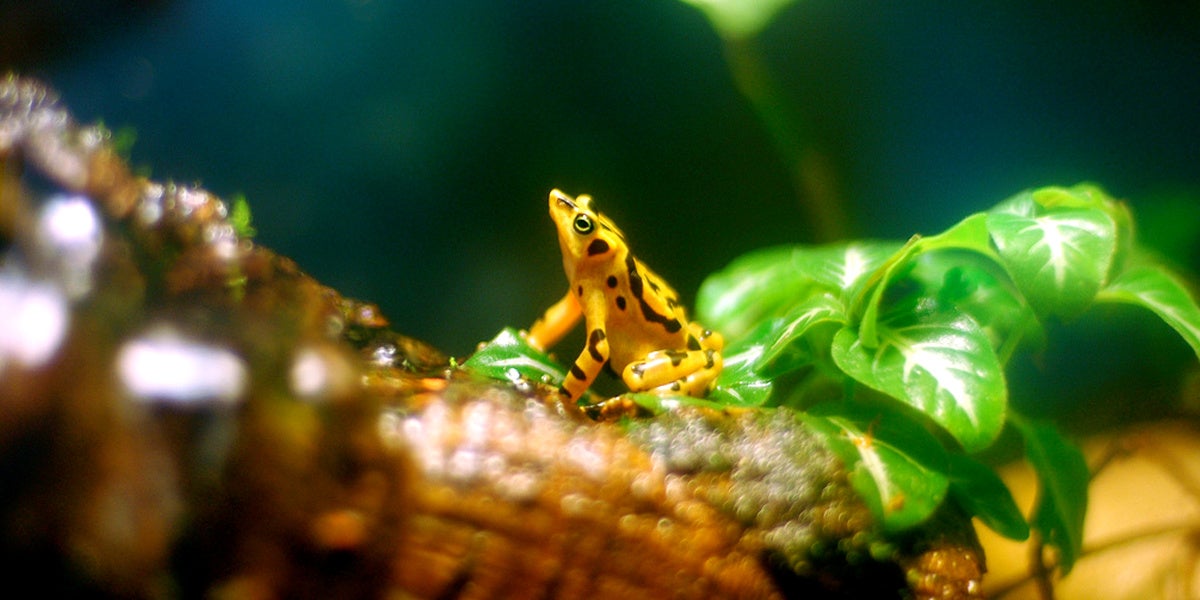 My office is filled with colorful images of frogs, toads and salamanders from around the world, some of which I have collected over 40 years as an immunologist and microbiologist, studying amphibian immunity and diseases. These jewels of nature are mostly silent working members of many aquatic ecosystems.

The exception to the silence is when male frogs and toads call to entice females to mate. These noisy creatures are often wonderful little ventriloquists. They can be calling barely inches from your nose, and yet blend so completely into the environment that they are unseen. I have seen tropical frogs in Panama and native frogs of Tennessee perform this trick, seemingly mocking my attempts to capture them.

My current research is focused on interactions between amphibians and two novel chytrid pathogens that are linked to global amphibian declines. One, Batrachochytrium dendrobatidis ( abbreviated as Bd), has caused mass frog dieoffs around the world. Recently my lab group contributed to a study showing that some species of amphibians in Panama that had declined due to Bd infections are recovering. Although the pathogen has not changed, these species appear to have developed better skin defenses than members of the same species had when Bd first appeared.

This is very good news, but those who love amphibians need to remain vigilant and continue to monitor these recovering populations. A second reason for concern is the discovery of a closely related chytrid, Batrachochytrium salamandrivorans (Bsal), which seems to be more harmful to salamanders and newts. 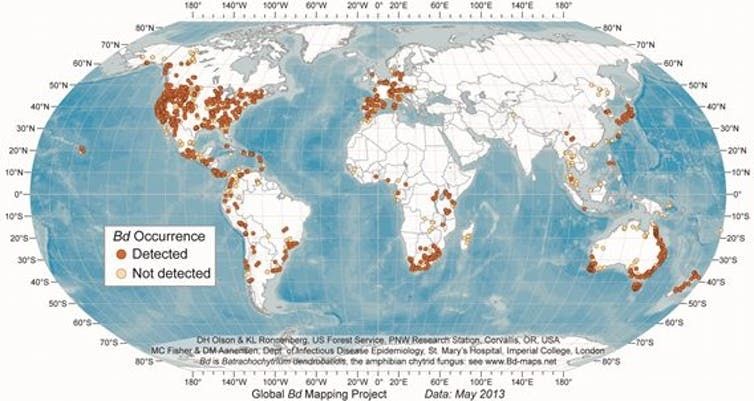 Amphibian chytrid fungus has been detected in at least 52 countries and 516 species worldwide. USDA Forest Service

More than a decade ago, an epidemic of a deadly disease called chytridiomycosis swept through amphibian populations in Panama. The infection was caused by a chytrid fungus, Batrachochytrium dendrobatidis. Scientists from a number of universities, working with the Smithsonian Tropical Research Institute in Panama, reported that chytridiomycosis was moving predictably from west to east from Costa Rica across Panama toward Columbia.

I was part of an international group of scientists, funded by the National Science Foundation, who were trying to understand the disease and whether amphibians had effective immune defenses against the fungus. Two members of my lab group traveled to Panama yearly from 2004 through 2008, and were able to look at skin secretions from multiple frog species before and after the epidemic of chytridiomycosis hit.

Many amphibians have granular glands in their skin that synthesize and sequester antimicrobial peptides (AMPs) and other defensive molecules. When the animal is alarmed or injured, the defensive molecules are released to cleanse and protect the skin.

Through mechanisms that remain a mystery, we observed that these skin defenses seemed to improve after the pathogen entered the amphibian communities. Still, many frog populations in this area suffered severe declines. A global assessment published in 2004 showed that 43 percent of amphibian species were declining and 32 percent of species were threatened.

In 2012-2013, my colleagues ventured to some of the same sites in Panama at which amphibians had disappeared. To our great delight, some of the species were partially recovering, at least enough so that they could be found and sampled again.

We wanted to know whether this was happening because the pathogen had become less virulent, or for some other reason, including the possibility that the frogs were developing more effective responses. To find out, we analyzed multiple measures of Bd‘s virulence, including its ability to infect frogs that had never been exposed to it; its rate of growth in culture; whether it had undergone genetic changes that would show loss of some possible virulence characteristics; and its ability to inhibit frogs’ immune cells.

As our group recently reported, we found that the pathogen had not changed. However, we were able to show that for some species, frog skin secretions we collected from frogs in populations that had persisted were better able to inhibit the fungus in a culture system than those from frogs that had never been exposed to the fungus.

The prospect that some frog species in some places in Panama are recovering in spite of the continuing presence of this virulent pathogen is fantastic news, but it is too soon to celebrate. The recovery process is very slow, and scientists need to continue monitoring the frogs and learn more about their immune defenses. Protecting their habitat, which is threatened by deforestation and water pollution, will also be a key factor for the long-term survival of these unique amphibian species in Panama. 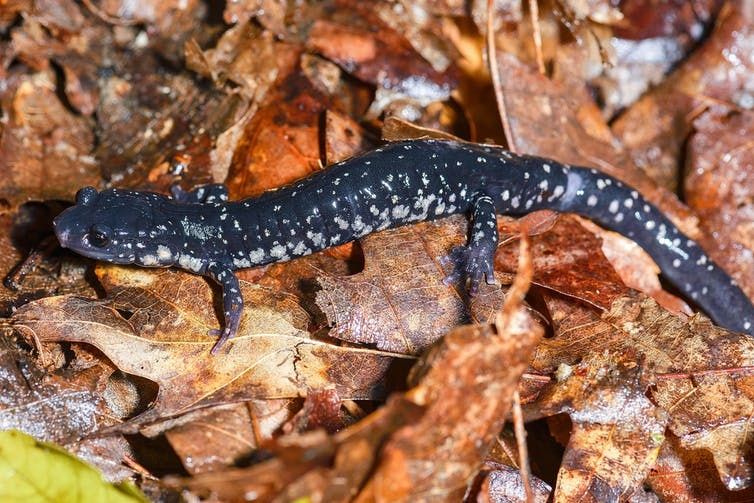 If Bsal fungus spreads to North America, it could wipe out species like this Northern Slimy Salamander (Plethodon glutinosus). Marshal Hedin, CC BY

Salamanders (and Frogs) at Risk

On a global scale, Bd is not the only threat. A second pathogenic chytrid fungus called Batrachochytrium salamandrivorans (abbreviated as Bsal) was recently identified in Europe, and has decimated some salamander populations in the Netherlands and Belgium. This sister species probably was accidentally imported into Europe from Asia, and seems to be a greater threat to salamanders than to frogs or toads.

Bsal has not yet been detected in North America. I am part of a new consortium of scientists that has formed a Bsal task force to study whether it could become invasive here, and which species might be most adversely affected.

In January 2016 the U.S. Fish and Wildlife Service listed 201 salamander species as potentially injurious to wildlife because of their their potential to introduce Bsal into the U.S. This step made it illegal to import or ship any of these species between the continental U.S., the District of Columbia, Hawaii, the Commonwealth of Puerto Rico or any possession of the U.S.

The Bsal task force is currently developing a strategic plan that lists the most urgent research needs to prevent accidental introduction and monitor vulnerable populations. In October 2017 a group of scientists and conservation organizations urged the U.S. government to suspend all imports of frogs and salamanders to the U.S.

In short, it is too early to relax. There also are many other potential stressors of amphibian populations including climate change, decreasing habitats and disease. Those of us who cherish amphibian diversity will continue to worry for some time to come.