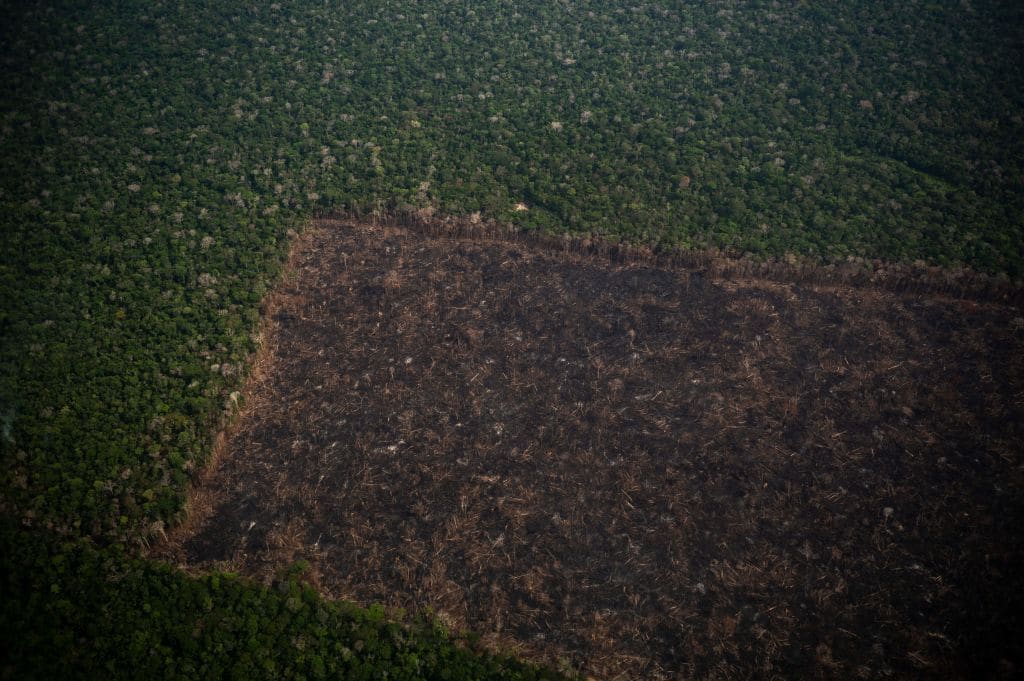 Deforestation in the Brazilian Amazon in 2021. MAURO PIMENTEL / AFP via Getty Images

At the COP26 climate conference in Glasgow in November, 2021, 141 countries promised to “halt and reverse forest loss by 2030.” For this to happen, deforestation will have to decline every year this decade, but this is not yet the case for tropical forests, which are vitally important for fighting the climate crisis.

In fact, new data from the World Resources Institute’s (WRI) Global Forest Watch found that 11.1 million hectares of tropical forest were lost in 2021, including 3.75 million hectares of primary rainforests that are important carbon sinks and biodiversity havens.

“[W]hen it comes to the loss of primary tropical forests, stubbornly persistent rates relate to the climate, the extinction crisis and the fate of many first peoples. High rates of loss continue despite pledges from countries and companies,” WRI global director of the forests programme Rod Taylor said, as The Guardian reported.

The rate of primary tropical rainforest loss has held more or less steady over the past few years, Global Forest Watch said. Overall, the tropics lost 11 percent less primary forest in 2021 when compared to 2020. However, 2020 numbers were 12 percent higher than in 2019 because of fires. In 2021, tropical primary forest loss still amounted to a rate of 10 soccer fields per minute and released as many greenhouse gas emissions as India does in a year, or 2.5 gigatons of carbon.

Forest loss wasn’t only a problem in the tropics, however. Boreal forests, particularly in Russia, saw record losses because of wildfires, as the country experienced its “worst fire season ever,” WRI researcher Elizabeth Goldman told The Washington Post.

“[T]he Russian fires are particularly worrying because of Siberia’s vast peatland area and melting permafrost, both of which can release massive amounts of stored carbon when peat is dried or burned, or when permafrost melts,” she explained.

Worldwide, the world lost more than 97,500 square miles of forest, an area approximately the size of Oregon. There was a two percent decline in deforestation compared to 2020, and some of the forests lost, like the boreal forests, are expected to grow back. However, they may not grow back fast enough to draw down carbon dioxide from the atmosphere in time to aid in combating the climate crisis now.

Brazil was the country that contributed most to tropical primary forest loss, followed by the Democratic Republic of the Congo and Bolivia, according to Global Forest Watch. Deforestation in Brazil’s Amazon rainforest has reached record levels under the leadership of far-right President Jair Bolsonaro, who has favored extractive industries over environmental protections and Indigenous rights.

Other tropical countries are moving in a greener direction, however. In Indonesia, the loss of primary tropical forest fell for the fifth year in a row, declining by 25 percent from 2020. The country has taken steps to regulate the palm oil industry, and companies have also promised to reduce deforestation.

“This indicates that corporate commitments and government actions are clearly working, and that Indonesia is heading in the right direction to make some of its climate commitments,” WRI Indonesia office senior manager Hidayah Hamzah said, as The New York Times reported.