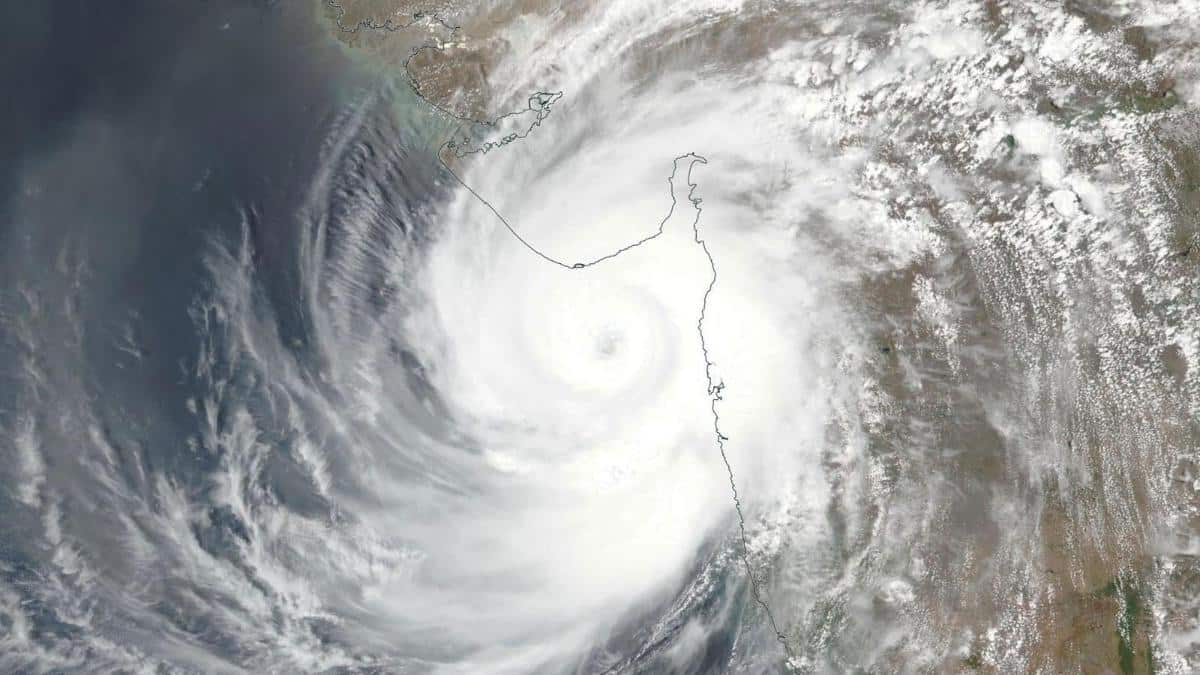 Visible satellite image of Cyclone Tauktae from the VIIRS instrument on the NOAA-20 satellite on Monday afternoon, May 17, 2021. NASA Earth Observatory

Satellite imagery (see Tweet by Scott Bachmeier) showed that Tauktae’s structure had changed markedly just before landfall, with the eye growing more distinct and the thunderstorms in the eyewall growing more intense, with colder cloud tops.

As of 11 a.m. EDT May 17, ANI reported that Tauktae had killed six and injured nine in India. A barge owned by the state-run Oil and Natural Gas Corporation (ONGC), moored to an oil drilling platform in the Heera oil fields (110 miles west-northwest of Mumbai), capsized on Monday, after breaking its mooring. Satellite imagery suggests that the eye of Tauktae passed directly over the site. Working in “challenging conditions,” two ships have saved 88 of the 273 people on board the barge; recovery efforts continue. The cyclone likely brought severe wind damage where the eyewall winds hit, a portion of the coast not heavy populated by India’s standards. The largest city in the region, Diu (population 52,000), recorded a wind gust of 83 mph (133 kph) in the weaker western eyewall of Tauktae at 12:30 EDT (9:30 p.m. local time). The winds were strong enough to bring down a cell phone tower in the nearby city of Una, Chintan Gandhi reported in a Tweet:

Perhaps the biggest threat from Tauktae is its storm surge, a threat that will continue for many hours past landfall. The Gulf of Khambhat, to the east of Tauktae’s landfall location, is a funnel-shaped bay, ideal for concentrating storm surge water. IMD predicted that the storm surge could reach four meters (13 feet) at the head of the bay. Heavy rains causing flashing flooding and river flooding will also be a major concern all across northwestern India through Tuesday. Evacuation and recovery efforts for Tauktae’s impact are sure to complicate India’s ongoing severe COVID-19 pandemic in the region. 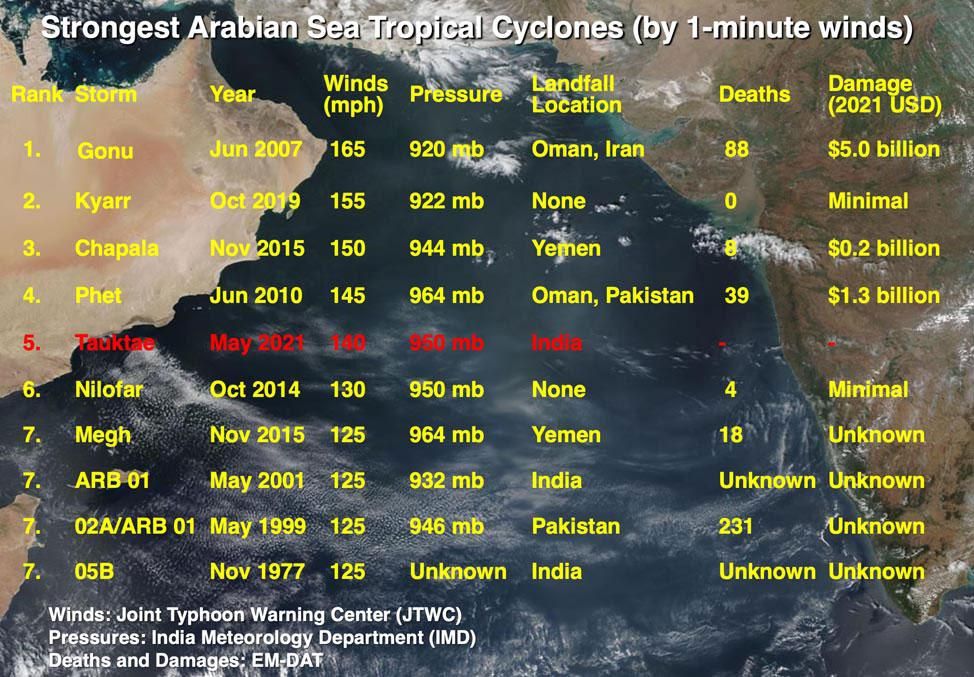 Figure 1. The top 10 strongest tropical cyclones observed in the Arabian Sea (the portion of the North Indian Ocean between India’s west coast and the Middle East). Tauktae was the fifth-strongest Arabian Sea cyclone on record.

Tropical Cyclone Tauktae reached peak intensity as a category 4 storm with 140 mph winds at 0 UTC, May 17, according to the JTWC. The fifth-strongest tropical cyclone on record in the Northern Indian Ocean’s Arabian Sea, Tauktae is one of only six category 4+ cyclones on record in the Arabian Sea. IMD put Tauktae’s peak intensity (occurring at 0 UTC, May 17), at 120 mph winds (three-minute average), with a central pressure of 950 mb. Accurate satellite goes back to 1998 for the Indian Ocean.

The JTWC does not assign landfall intensities, but if one considers the six-hourly advisory before landfall (or at landfall), Tauktae is tied as the strongest landfalling Arabian Sea cyclone on record: the top five, according to the JTWC (available at the NOAA Historical Hurricane Tracks database): 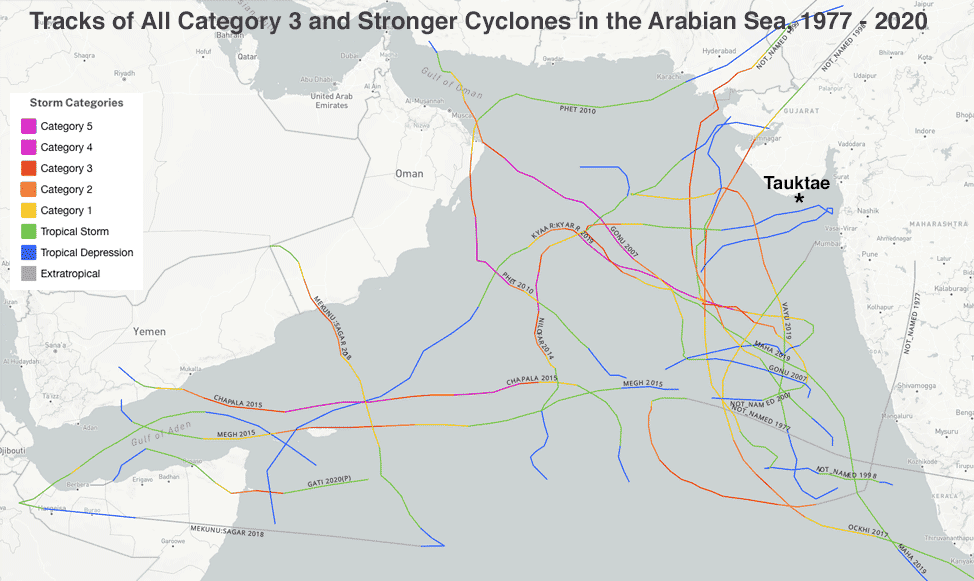 Figure 2. Tracks of all tropical cyclones that have reached at least category 3 strength (1-minute sustained winds of 115 mph or greater) in the Arabian Sea. Only six cyclones have attained category 4 strength (including Tauktae). The one category 5 storm on record was Tropical Cyclone Gonu in 2007 NOAA Historical Hurricane Tracks database

On Monday, Tauktae passed only 85 miles (140 km) west-southwest of Mumbai, India, the seventh-most populated city in the world (metro area population 20 million). A direct hit clearly could have been catastrophic. According to a 2019 study led by Dr. Adam Sobel, “Tropical Cyclone Hazard to Mumbai in the Recent Historical Climate,” a category 3 or stronger cyclone passing within 150 km of the city is estimated to be a 1-in-500-year event (a 0.2% chance of occurring in any particular year). That research did not address how climate change may be impacting these odds, but noted that “the hazard to the city is likely to be increasing because of sea-level rise as well as changes in storm climatology.”

Cyclones affecting Mumbai are very rare, as prevailing steering currents tend to drive storms northward and westward rather than eastward onto India’s west coast. Mumbai has had only one landfall by a storm at tropical storm strength on record, an unnamed 1940 system (though Adam Sobel has documented a possible hurricane-strength Bombay cyclone in 1948, which killed at least 12 people). (An 1882 Bombay cyclone reputed to have killed 100,000 people in the city was a hoax.) 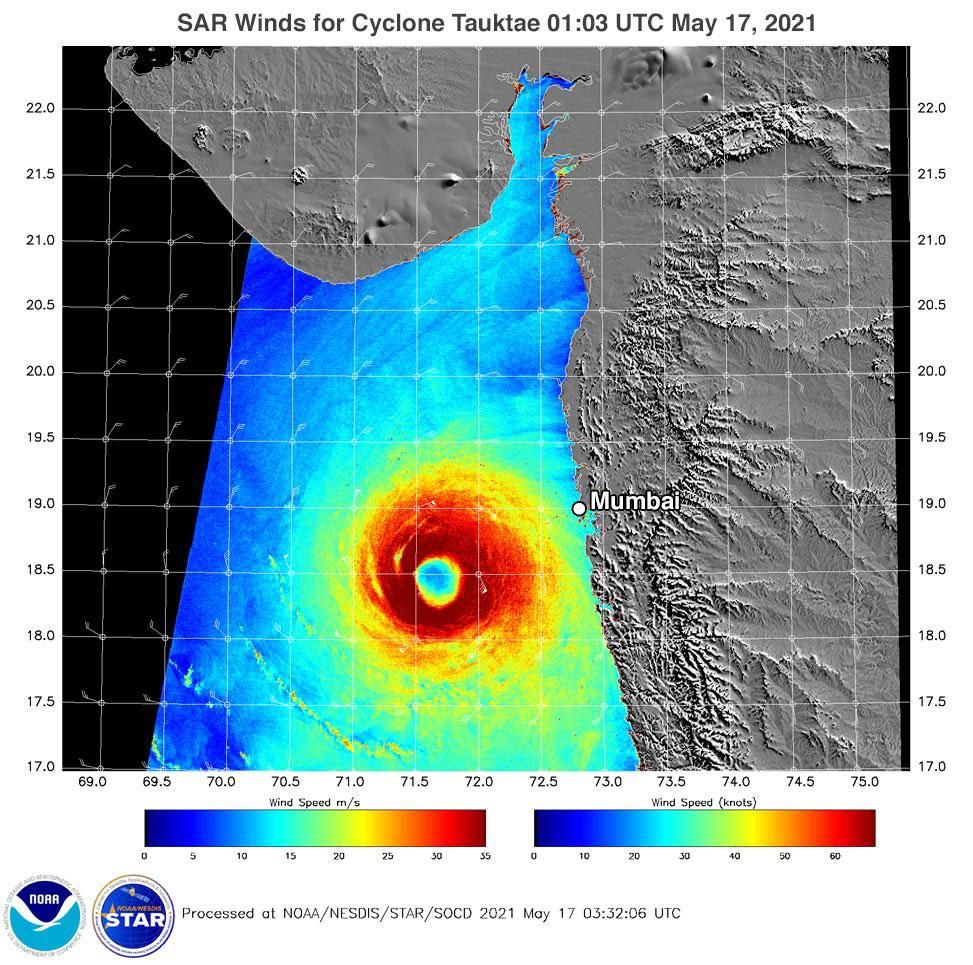 Figure 3. Winds of Cyclone Tauktae from synthetic aperture radar (SAR) at 1:03 UTC, May 17, 2021. Winds as high as 81 knots (93 mph) were measured.NOAA STAR – Center for Satellite Applications and Research

The North Indian Ocean has two tropical cyclone seasons – one centered in May, before the onset of the monsoon, and one centered in October/November, after the monsoon has waned. During the June-September peak of the monsoon, tropical cyclones are uncommon because of interference from the monsoon circulation. Since the introduction of reliable satellite data in 1998 over the Indian Ocean, no category 4 or stronger cyclones were observed until 2010. Since then, six such storms have formed (including Tauktae).

This unprecedented shift in tropical cyclone activity led to a 2017 modeling study by Murakami et al. which concluded that human-caused climate change had increased the probability of powerful tropical cyclones over the Arabian Sea during the post-monsoon period (October/November), and that this risk would increase further in the future – with potentially damaging consequences to the nations bordering the Arabian Sea. In a 2018 review paper (“Tropical Cyclones and Climate Change Assessment: Part I. Detection and Attribution“), all 11 hurricane scientist authors concluded that the balance of evidence suggests that there was a detectable increase in post-monsoon extremely severe cyclonic storms in the Arabian Sea during the 1998 – 2015 period; 8 of 11 authors concluded that human-caused climate change contributed to the increase.

Tauktae formed during the pre-monsoon season (May), so these conclusions do not directly apply to the storm. However, 10 of 11 authors of the 2018 review paper concluded that the balance of evidence suggests that there is a detectable increase in the worldwide average intensity of global hurricanes since the early 1980s. Eight of the 11 authors concluded that human-caused climate change contributed to that increase.