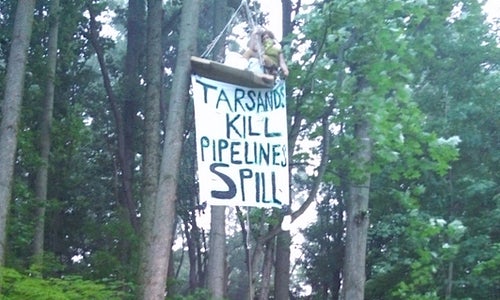 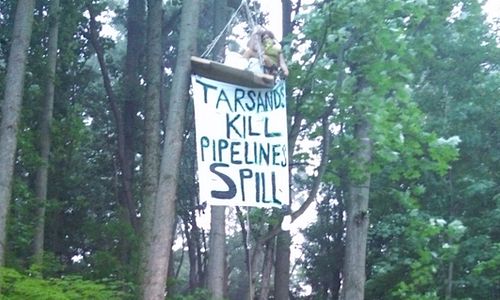 Jessica had the choice between two plea deals, one being a year of probation and the other 26 days in jail. Jessica chose to accept jail time in order to avoid a lengthy probationary period and to highlight the injustice of tar sands industry, while standing in solidarity with political prisoners across the globe.

On Aug. 7, 2013 Jessica spent several hours in a tree in order to prevent Enbridge from expanding its tar sands pipeline in the area. Despite having a written agreement with the police saying that she would not be arrested if she came down from the tree by 5 p.m., Jessica was eventually arrested and charged with a misdemeanor criminal trespass.

Shortly after her arrest and subsequent release from jail, Jessica took to the trees again on Sept. 16, 2013 in La Porte County, again preventing construction activities from occurring. Jessica was charged with two counts of trespass and one count of theft.

Both tree-sits were in opposition to Enbridge’s expansion activities on the same pipeline which burst July 2010, causing what is now regarded as the largest inland tar sands spill in U.S. history. The disaster led to 900 thousand gallons of diluted bitumen spilling into Talmadge Creek and eventually into more than 40 miles of the Kalamazoo River. To date, the spill has not been cleaned up, and Enbridge continues to prioritize the pipeline’s expansion over cleaning up the disastrous mess the pipeline left behind.

Jessica is going to jail for taking action against a company and an industry that is committing violent crimes across North America in order to make a profit from tar sands. The extraction of tar sands oil in Alberta, is destroying the Northern Boreal Forest, displacing First Nations peoples, perpetuating climate change and increasing cancer rates in indigenous communities and wildlife nearby.

When the tar sands oil reaches the Midwest via pipelines it creates sacrifice zones in the communities surrounding the refinery in places like Whiting, IN, and southwest Detroit. These refineries have recently upgraded to handle even more tar sands. This has contributed to a toxic environment for many people in the area due to the by-products that result in the refining process, such as petroleum coke. 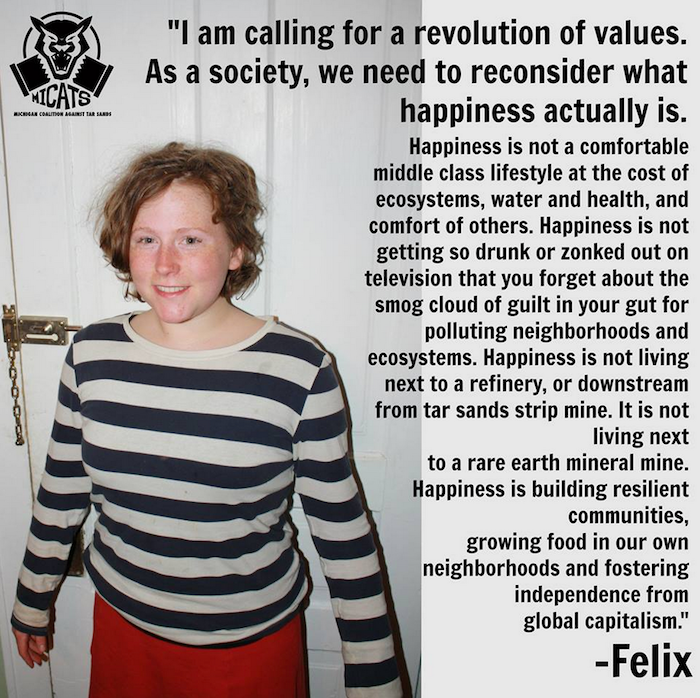 Jessica made this statement in front of the Courthouse yesterday, just before being taken away:

I grew up a mile from Lake Michigan. I rode my bicycle there many mornings to watch the sunrise. BP just spilled 1,638 gallons of oil, probably tar sands, into Lake Michigan. This is the inevitability of the tar sands industry—it is sloppy and poorly regulated. There are unreported spills every hour, but it is well funded, and easy for companies like Enbridge to pay off governmental agencies to influence them to make statements like ‘No long-term health effects expected from 2010 Kalamazoo River oil spill.’ I climbed that tree in September to highlight the injustice of tar sands, and to halt expansion of Enbridge pipeline 6B. As a resident of the greater Kalamazoo River basin, I am conscious of the ways in which corporations such as Enbridge, Marathon and BP turn ecosystems and communities into sacrifice zones in the name of profit. The people of Marshall and surrounding communities that endured the spill have been dealing with intense health implications such as kidney and liver failure, and cancer. July 27, 2010 when Enbridge spilled around a million gallons of tar sands into the Kalamazoo River, should have been the end of the line. Tar sands should no longer be pumping through the Great Lakes bio region. We have to leave tar sands in the ground. The governmental agencies need to stop valuing profit over health and safety of communities.

Tar sands from Canada are actively killing indigenous people in the boreal forest as their water and land are polluted by around 39 companies that are active there. The concept of ‘infinite growth’ that underlines capitalism is not at all logical on a planet with finite resources. Enbridge, Marathon and BP, these ‘corporate people’, and the attitude of entitlement are actively enabling the apocalypse. Climate change is another main reason I climbed the tree—all reputable organizations of scientists endorse the statement ‘Most of the global warming in recent decades can be attributed to human activities.’ Our species will not continue this way. The jury is no longer out, there are things we can do about this fact. Halting the problem at the root is a viable solution. The greenhouse gas emissions must stop. Carbon emissions must stop. Stomping on the rights of indigenous people must stop.

I am calling for a revolution of values. As a society, we need to re-consider what happiness actually is. Happiness is not a comfortable middle class lifestyle at the cost of ecosystems, water and health, and comfort of others. Happiness is not getting so drunk or zonked out on television that you forget about the smog cloud of guilt in your gut from polluting neighborhoods and ecosystems. Happiness is not living next to a refinery, or downstream from tar sands strip mine. It is not living next to a rare Earth mineral mine. Happiness is building resilient communities, growing food in our own neighborhoods and fostering independence from global capitalism.

It is essential that we come together and organize ourselves in the spirit of resilience. We cannot live on a dead planet. We cannot drink their money. We need each other to stop these industries from threatening our livelihoods. It is essential we resist harsh extraction and the attitude of human entitlement, colonialism and patriarchy that enable the earth to be co modified. We need to grow organic, bio-dynamic food in our own communities to become independent, to soften the collapse that climate change will incur. We need to stop the movement of tar sands once and for all. Leave the tar sands in the ground.