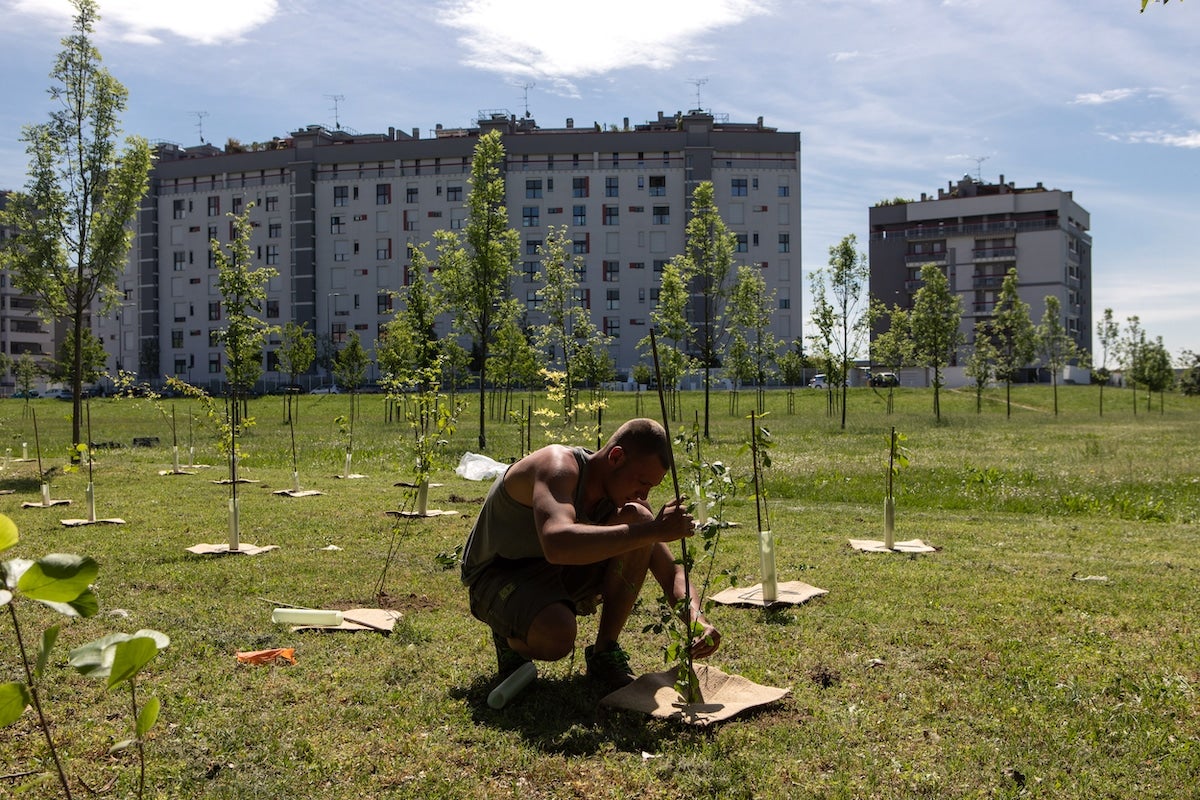 A gardener plants a young hornbeam as part of an urban forestry project in Milan, Italy on May 21, 2021. Emanuele Cremaschi / Getty Images

A new report, called the Land Gap Report, from researchers around the world has found that climate pledges from governments and corporations that rely heavily on tree planting are not realistic. That’s because there likely isn’t enough land on Earth to support all of these carbon offsetting pledges.

Researchers calculated the land needed to fulfill current global net-zero plans that focus on tree planting initiatives and found that collectively, they need 1.2 billion hectares (nearly 3 billion acres) of land, or a landmass larger than the U.S. The amount of land needed to meet these carbon offsetting pledges is the size of the global food-producing base.

“Countries are loading up on land pledges to avoid the hard work of steeply reducing emissions from fossil fuels, decarbonizing food systems and stopping the destruction of forests and other ecosystems,” Kate Dooley, the lead author of the Land Gap Report and a researcher at the University of Melbourne, said, as reported by Inside Climate News.

While scientists do say that reforestation is an important part of curbing climate change, other methods are necessary. Extensive tree planting may not be possible, and the amount of land needed to meet these goals would alter ecosystems and put pressure on Indigenous peoples’ rights as well as food security. The report notes that Indigenous peoples and local communities with secure land rights already do well in preserving forests and biodiversity and sustainably producing food for communities, far better than governments and corporations.

Rather than focusing on carbon offsets, especially through land use initiatives, the report authors say that governments and corporations need to start reducing emissions outright.

“Countries treat land like a limitless resource in their climate plans,” Dooley said, as reported by Reuters. “Using a land area equivalent to half of current global croplands for tree planting simply won’t work.”

To do so, the authors recommend entities focus on a four-prong approach: providing more clarity on extent, use and ownership of land in climate pledges; protecting primary ecosystems rather than planting new trees; ensuring climate mitigation efforts build on and strengthen Indigenous rights; and promoting multifunctional strategies that contribute to socioecological resilience and support human rights.

“The ‘net’ in net zero must not distract from emissions reductions now: Framing climate targets as ‘net zero’ risks undermining mitigation action by allowing a trade-off between emissions reductions and removals,” the report executive summary explains. “Targets based on net accounting obscure the extent to which countries are relying on land removals for meeting climate mitigation commitments.”

Not to mention that planting monocultures of new trees makes the trees less resilient to fires, pests, disease and drought, while preserving primary forests can help in storing more carbon.

“Land-based carbon removals make an important contribution to mitigation efforts only if they are accompanied by rapid and deep cuts in fossil fuel emissions from all sources: they must complement and not offset fossil fuel and other emission reductions,” the report concludes.