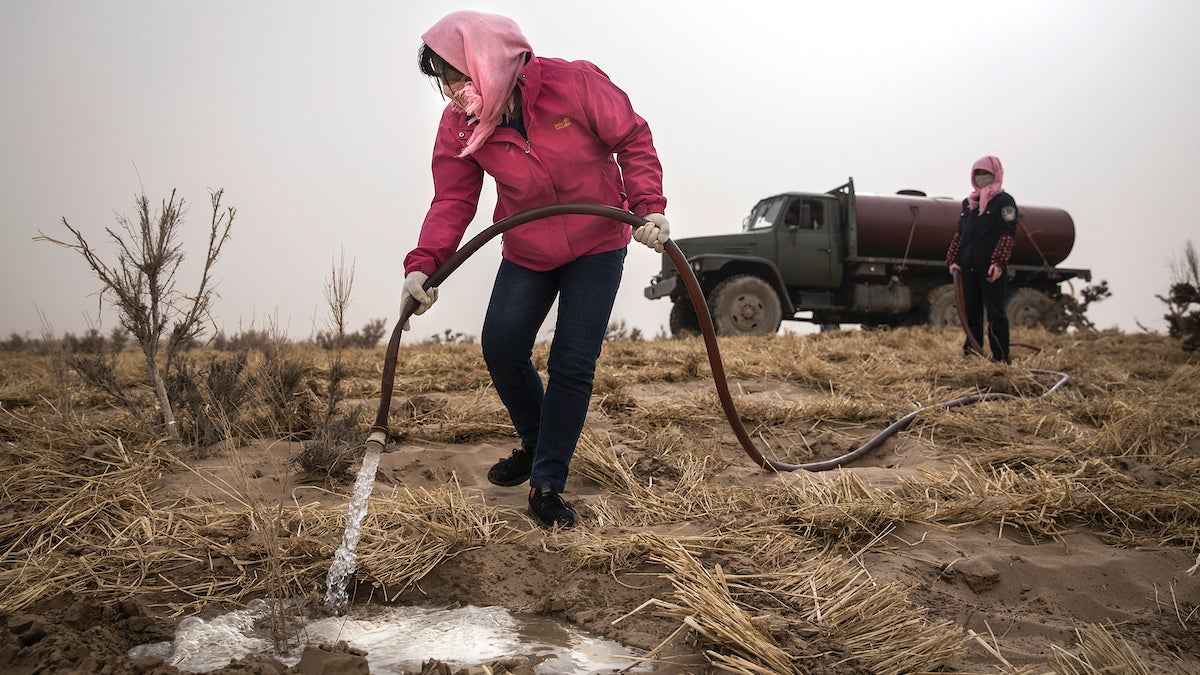 Local women water newly planted saxaul in the desert at Mingqin county on March 27th, 2019 in Wuwei, Gansu Province, China. The trees were planted as part of Ant Forest, a green initiative on the Alipay app. Wang HE / Getty Images

Since its launch in 2016, over half a billion people have used Ant Forest to convert lower-carbon activities such as using public transport into real trees.

The game is helping China lead the way in re-greening the planet and is serving as a model for tree-planting schemes elsewhere.

It’s the kind of innovation the World Economic Forum is seeking through UpLink, a platform for crowdsourcing sustainable development solutions to challenges including how to plant a trillion trees.

“Ant Forest taps into the best of human ingenuity and innovation to create a better world,” said Inger Andersen, executive director of the United Nations Environment Programme – which in 2019 gave the project the UN’s top environmental award.

So how does it work?

To start with, Ant Forest has plenty of potential players, being part of China’s Alipay mobile payments app, which is used by more than a billion people.

Each time a user performs a lower-carbon activity, such as paying a utility bill online or cycling to work, they are rewarded with “green energy points.”

However, rather than immediately spending those points on a real tree, Ant Forest turns its users into game players. The green energy points “grow” into a virtual tree on the user’s app. And users can share green energy with friends and see how their virtual forests compare with others.

For every virtual tree grown, Ant Forest donates – and plants – a real one. And this gamification has had real-world impacts.

The world is getting greener, with China and India leading the way. NASA / Nature Sustainability

According to a study in Nature Sustainability, NASA satellites have revealed a 5% increase in global green leaf cover since the early 2000s – with China leading that growth.

While a third of Chinese greening is due to the expansion of agriculture, 42% comes from projects to plant forests. According to the UN, Ant Forest has become the country’s largest private sector tree-planting scheme – so the game is a big part of China’s greening.

And the locations for planting are ambitious: arid areas of Northern China like parts of Inner Mongolia, Gansu and Shanxi. Many of the 122 million Ant Forest trees have been planted in areas that have become deserts.

There has been some criticism. In 2019, the journal Nature reported concerns that holding back deserts with trees could put pressure on water supplies. Scientists in China responded that local conditions are taken into account. Drought-resistant varieties, such as the “saxaul” shrub, are used by Ant Forest.

The project is certainly ambitious. In 2019, Alipay’s parent company, Ant Financial Group, said the trees covered some 112,000 hectares. And there are sizable spillover benefits, too.

Another major gain from the project has been employment. Ant Financial Group said 400,000 job opportunities have been created through Ant Forest, many for local farmers.

But if the trees are donated by Ant Financial, why not simply plant the trees and cut out the virtual ones?

The reason, as the UN puts it, is “significant behavioural change.” Gamification has encouraged millions of people to adopt lower-carbon lifestyles.

The success of the project has now led to a similar initiative in the Philippines, launched by the mobile payments provider GCash.

The project is an encouraging step, according to the UN’s Andersen.

“Although the environmental challenges we face are daunting,” she said, “we have the technology and the knowledge to overcome them and fundamentally redesign how we interact with the planet.”