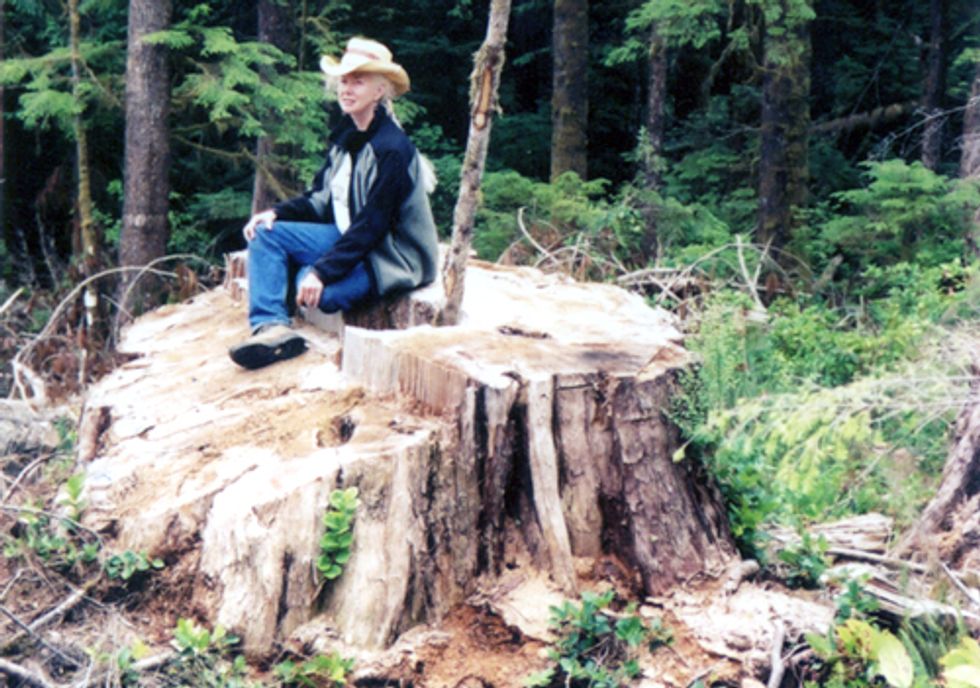 There are all sorts of environmental activism in the world: that which preserves and stewards intact and beautiful places, that which cleans up those places that have been poisoned or otherwise impacted by humanity, and so on. But there’s another kind of activism that’s emerging, as author and activist Trebbe Johnson shares in a new essay in Orion magazine: that of giving attention to the wounded places in our world that are still a part of us. Her forthcoming book is called Aphrodite at the Landfill.

Q. Trebbe Johnson, in your Orion essay, you talk about trying to find beauty in a clearcut. How is this even possible, and what did you do?

A. If you sit long enough, openly enough, with curiosity and compassion, the very presence of a place begins to, well, leak through what seems the surface reality. In the clearcut, the most stunning example of beauty that I myself saw was a mother bear and two small cubs gracefully prancing over the top of clearcut debris three feet deep to get from the logging road over to a patch of remaining forest. One of the others on our journey to the clearcut made altars to aspects of her past that she considered ruined, and that created a kind of inner beauty for her about the power of redemption in damaged places, both inside and out. I have found that just being willing to sit with the un-beautiful, being open to what it might reveal, invariably reveals beauty in very surprising ways.

Q. How applicable is this to fracking rigs and mountains whose tops have been blown off?

A. My organization, Radical Joy for Hard Times, supports communities around the world in going to what we call “wounded places” and finding and making beauty there. I myself live in northeastern Pennsylvania, in fracking country, and have gone several times to places that have been fracked for natural gas. Last June, I sat with friends on the bank of Sugar Creek, near Towanda. Sugar Creek is endangered both because the gas companies are taking water out of it to frack and because they are dumping toxins into it. Spending an hour or so there, just sitting, being with the river on a Saturday morning, the unexpected gift of beauty was the persistent aliveness of this river that we all felt, the sorrow we shared because of its predicament, the sense of community we felt together in simply being with this river as if it were a dear friend who was ill and that we loved no matter what. And of course, the sun was glinting on the water, the birds and butterflies were flitting all about.

People invariably discover that by spending time in these places and simply being with them, they fall in love with them.

Q. Does the mindfulness training undertaken in such places inform, inhibit or spur activism?

A. Mindfulness training is all about being in the present. If you get accustomed to being in the present, whether you are actually sitting on your cushion or just living your daily life, then you recognize how essential it is to acknowledge the reality of the situation, any situation, not ignore it or tell yourself a story about why it’s not what it seems to be. In this way, mindfulness would inform activism, support activism. Simply acknowledging a terrible reality is not enough, of course; it’s imperative to act on what you perceive, what you know with a hard, fierce, solid certainty. But then again, I believe activism can take many forms, and not all of them entail protesting and being angry, which is what some people think activism means. Taking a group of school children to a river and having them sit quietly there for a few minutes is activism. Making art in and about and for a wounded place is activism. Being mindful of the wounded places around you so you don’t add to the woundedness is another form of activism. Ideally, mindfulness will make the present reality so vivid and immediate that one would be compelled to live differently in the face of that reality.

Q. On Tuesday during Orion's live discussion of your essay, we'll also have Glenn Albrecht on the line, the Australian philosopher who coined the term 'solastalgia.' Can you say what this is and why he developed it?

A. Glenn Albrecht came up with this term after he began getting desperate calls from people living nearby in Hunter Valley in New South Wales. This area used to be so lovely and fertile it was known as the Tuscany of Australia. Now it was being torn apart by deep-pit coal mining. The noise, the air and water pollution, the bright lights, the total destruction of the land and disregard for people’s feelings about it were having a shattering effect on people. They began asking Glenn for counsel. He coined this word, “solastalgia,” to describe what they were experiencing. It means “the pain one feels when the place where one lives and that one loves is under assault.” One of the roots is related to the word “nostalgia,” because, as he has said, it’s the experience of losing your place on Earth, not because you leave it, but because it leaves you.

Q. How is solastalgia related to or different from ecopsychology?

A. Solastalgia is such an important contribution to the way we think about ecology, because, for the first time, it expresses in a direct, singular way that when the places we love are hurt, we hurt, too. There is a word now for that reality, which often in the past was not even recognized as valid. If you were in pain about the loss of a place you loved, you might be accused of anthropomorphizing or of caring about frogs or snail darters or whatever more than people. Ecopsychology is another enormously important path of thinking about our relationship to the world around us. It was created by Theodore Roszak about twenty years ago, and it is the recognition and treatment of the reality that the mental and spiritual health of people is directly related to the health of the world around them. It’s not just your job and the way your parents treated you when you were a child that’s affecting how you feel about your life and your future, it’s the fact that the woods have been cut down to make a mall and the honeybees are no longer coming to your rose bushes and the climate is changing inexorably! You could say ecopsychology defines a path of study, treatment and exploration that will ideally lead to healthier people. Solastalgia names a place where many people might set out on that path.

Q. What is the Global Earth Exchange?

A. The Earth Exchange is the simple, five-part practice that Radical Joy for Hard Times created for anyone to do anywhere. The five steps are:

1. Go with friends to a wounded place.

2. Sit a while and share your stories about what the place means to you.

3. Spend time sitting or walking alone, getting to know the place as it is now.

4. Tell the stories of what you noticed.

5. Make an act of beauty for the place.

There’s a slide show on our website of some of the incredible acts of beauty people have made. In 2012, the Global Earth Exchanges happened in 19 countries and on all seven continents, and ranged from farmers planting native trees in north Bali, to a group in Japan who made origami birds for the people who had been victims of the tsunami and nuclear meltdown, to a visit three friends made to Los Alamos nuclear laboratory, to a scientist in Antarctica who participated in honor of the glacier melting outside her window. The next Global Earth Exchange is June 22, 2013.

Flat Rock Creek—A group in Missouri created this arrangement in honor of a creek that had flooded and been clogged with debris. Global Earth Exchange 2012.

Q. You end your Orion essay talking about the Gulf oil disaster's daily deluge of horrific images and news. How did your refusal to look away from it help you?

A. I think I should say first that I was physically remote from the Gulf while the BP rig was leaking. How I might have behaved differently if I had lived there and was personally experiencing so much hardship and suffering I can’t say. But by trying not just to read the news but to absorb it and feel sorrow and compassion for those who were suffering, I learned that I can face what’s ugly, distressing, infuriating and not run away.

I think the practice of trying to be present with the BP disaster has helped me as gas fracking comes closer and closer to my community in Pennsylvania. Sometimes I just sit on a hill and watch them putting in a well, and the experience of being present, seeing what’s actually happening instead of hiding from it, calms my fears and grounds me. Sometimes I force myself to wave at one of the guys in a truck carrying fracking fluid, when my whole body is boiling with anger and I want to throw stones at him. Finally, my husband and I realized we can’t try to escape by running away from northeastern Pennsylvania. We will stay, we will take care of our own five and a half acres, we will reach out to those who are hurting, we will find ways to make beauty and see beauty.

For more information and registration for this free phone/web event click here.