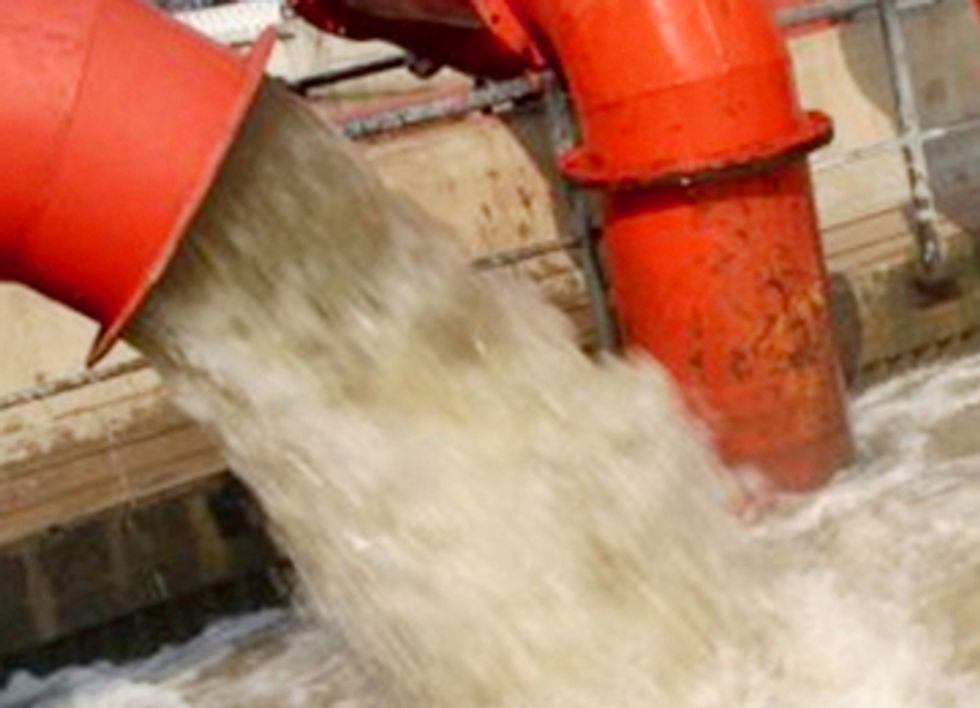 A Pennsylvania industrial wastewater treatment plant has been illegally accepting oil and gas wastewater and polluting the Allegheny river with radioactive waste and other pollutants, according Clean Water Action, which announced today that it is suing the plant.

“Waste Treatment Corporation has been illegally discharging oil and gas wastewater since at least 2003, and continues to discharge such wastewater without authorization under the Clean Water Act and the Clean Streams Law,” the notice of intent to sue delivered by Clean Water Action reads.

Many pollutants associated with oil and gas drilling—including chlorides, bromides, strontium and magnesium—were discovered immediately downstream of the plant’s discharge pipe in Warren, PA, state regulators discovered in January. Upstream of the plant, those same contaminants were found at levels one percent or less than those downstream, or were not present at all.

State officials also discovered that the sediments immediately downstream from the plant were tainted with high levels of radium-226, radium-228 and uranium. Those particular radioactive elements are known to be found at especially high levels in wastewater from Marcellus shale gas drilling and fracking, and state regulators have warned that the radioactive materials would tend to accumulate in river sediment downstream from plants accepting Marcellus waste.

“To us, that says that they are discharging Marcellus Shale wastewater, although no one admits to sending it to them,” said Myron Arnowitt, Pennsylvania state director for Clean Water Action.

A request for comment sent to Waste Treatment Corporation has not yet been answered.

The amount of radioactivity found in the Allegheny riverbed is striking. Sediments just downstream of the Waste Treatment Corporation’s discharge pipe contained over 50 picocuries per gram (pCi/g) of radium-226, state records show. To put that number in rough context, the levels in found in the Allegheny are 10 times those that the U.S. Environmental Protection Agency (EPA) requires the surface soil at cleaned-up uranium mining sites to achieve.

Most of the radioactive wastes associated with fracking are too weak to cause harm to people unless they are breathed in, drank or eaten, since the alpha and beta radioactivity they primarily give off is too weak to get past people’s skin. But at the levels discovered by state regulators, the dirt from the Allegheny’s riverbed could potentially be radioactive enough to cause harm to people who are simply near it.

Once-confidential oil and gas industry studies have also pointed to another risk from disposing of radioactive materials from drilling or fracking in waterways—the risk to fish and aquatic life like crustaceans and mollusks. Radium bioaccumulates in fish, meaning that the more a fish ingests contaminated water or soil over its lifetime, the more radium it will contain. If people eat those fish, those radioactive materials consumed along with the fish can do harm to people’s internal organs.

In their January study, state officials did not test fish or other animals like large clams or mussels from the Allegheny to see whether they were carrying radium or other pollutants. But they did study smaller organisms, and concluded that the wastewater being discharged after being processed by Waste Treatment Corporation into the Allegheny was “negatively impacting” aquatic life, specifically bugs, snails and small mollusks in the river. Many pollution-sensitive creatures found upstream of the plant’s discharge pipe were missing downstream from the pipe.

"Those are the base of the food pyramid for large species like fish that people are generally more concerned about," Mr. Arnowitt said.

Just last month another industrial wastewater treatment plant was sanctioned by the EPA for illegally discharging untreated Marcellus waste. Environmental regulators also discovered high levels of radium around the discharge pipe at the Pennsylvania Brine Treatment Josephine plant. That plant was fined over $80,000 and the owner agreed to make up to $30 million in upgrades before accepting any more Marcellus shale wastewater.

The Clean Water Action lawsuit also calls attention to a troubling lack of record keeping for the toxic wastewater generated by the shale drilling boom, raising the possibility that more illegal dumping could be uncovered in the future.

“Currently, there are no companies drilling in the Marcellus Shale that report sending wastewater to WTC for disposal,” a Clean Water Action statement says, referring to Waste Treatment Corporation by its initials. “However, the presence of radioactive materials in WTC’s discharge indicates that WTC’s wastewater likely comes, at least in part, from Marcellus Shale wells.”

In 2011, after problems with wastewater disposal made national headlines, many industrial wastewater treatment plants said that they stopped taking Marcellus wastewater and were only taking conventional oil and gas wastewater, Arnowitt said. But the levels of contaminants—including the ones associated with Marcellus waste—in the discharge at many wastewater plants never changed, he said.

“It was hard to figure out why everyone believed what they were saying,” he added.

With a track record like this, some Pennsylvanians are skeptical about their state government’s capacity to police the drilling boom. These doubts only deepened when Senate Bill 259 was signed into law by Gov. Corbett (R-PA) earlier this month. The bill was originally intended to protect landowners by making royalty payments for people who leased their lands to drillers more transparent.

But a little-noticed provision slipped into that bill as an amendment has sparked an outcry. The amendment would allow drillers to pool together acreage owned by many different people and drill it all together, even if a lease wouldn’t otherwise allow the oil and gas company to do so. This move will especially facilitate Marcellus shale drilling and fracking, which often involves drilling a well horizontally under many properties.

“This pooling language had no place in this bill,” Trevor Walczak , vice president of the Pennsylvania chapter of the National Association of Royalty Owners told local reporters. ”If you wanted to address pooling, we should have been doing it in a stand alone bill we could debate, not hiding it in here and fast-tracking it through.”

State Rep. Everett (R-PA), who introduced the language in the bill, told Pennsylvania’s TribLive he had no idea whether someone from the oil and gas industry suggested to him that provision be included. It drew little attention or debate before the bill was enacted.

“I'm serious. I don't know who exactly proposed (that amendment). We had a lot of proposals going into the bill. Legislation is brought to us by staff. I send them ideas, and they put them into a form of legislation and come back. Where the idea came from, who proposed this ... section, I don't know who that individual was,” Everett said.

While Pennsylvania struggles to regulate the drilling industry, local activists are finding success in organizing outside of Harrisburg.

In one of Pennsylvania’s other major watersheds, the Delaware River basin, some are hailing the pull-out announced this week by two natural gas companies, Hess Corporation and Newfield Exploration Company, as a major victory for those looking to protect the Delaware watershed, which provides drinking water to 15 million people, including Philadelphia and half of New York City.

The two companies sent a letter informing to roughly 1,300 landowners that they were abandoning plans to drill their holdings in the Delaware river basin. The landowners were part of the Northern Wayne Property Owners Alliance, and had negotiated their lease collectively.

"The lease is gone. It is no longer in force. They are releasing the properties," the group's spokesman, Peter Wynne, said Monday.

That particular region has drawn international attention, in part because it's home to film-maker Josh Fox, director of Gasland I and Gasland II, who first began investigating fracking after and oil and gas company sent him an offer to lease his family's land.

"This proves that people, organized and passionate can actually win sometimes,” Fox said. “In the grand scheme of things, this is a small victory, but it's huge. It's the Upper Delaware."

Economics played a major role in the lease cancellations. Newfield Exploration said the price of gas had dropped too low to justify holding leases in the area. The Delaware River Basin, unlike most of Pennyslvania, has been under a shale drilling moratorium since the Marcellus rush began.