One Man’s Mission to Turn Trash Into Art and Music 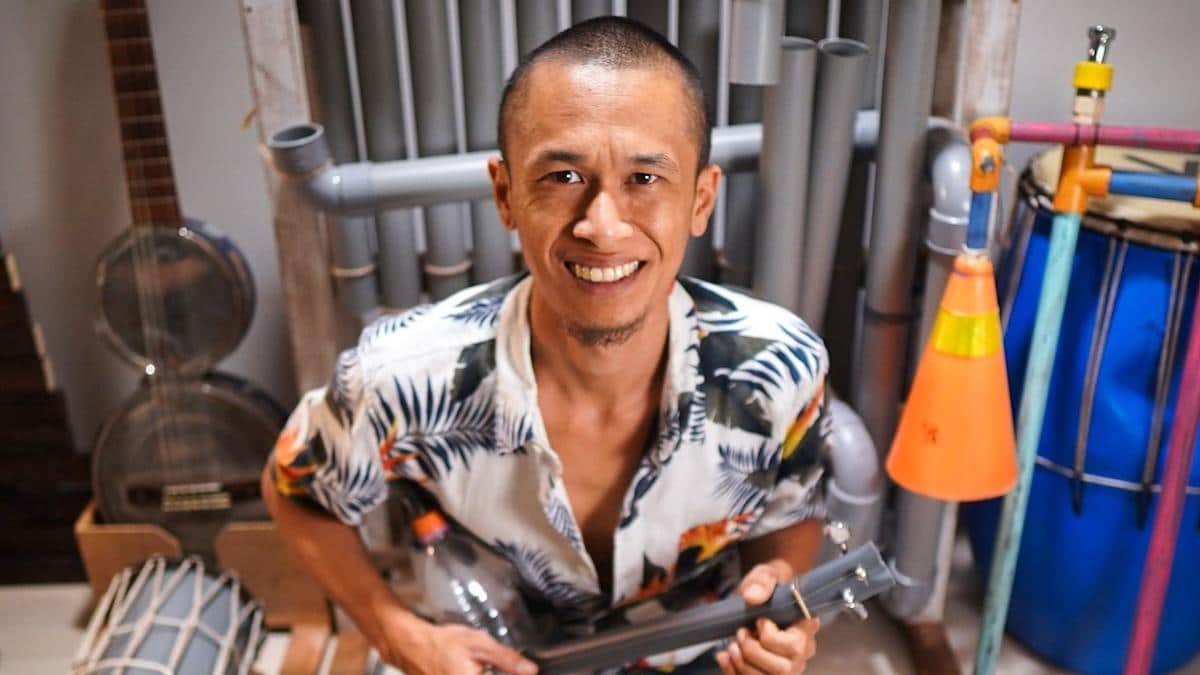 In a CNN feature, Kan Chan Kin asks: “What happens to your trash when you put it in your bin? It doesn’t magically disappear, you know?”

Kan’s mission is to spread awareness about our collective trash problem and to encourage waste reduction. He is most well-known for transforming trash into musical instruments that he plays around his home island of Mauritius and in public speaking opportunities.

“I make instruments, I play music, and I try to blend them both together and inspire people to reuse things,” Kan told CNN. “How simple stuff like a bottle, some pieces of wood, you can make drums or many, many other instruments.”

Kan explained how upcycling musical instruments from trash was “very easy” because the materials are all around and free, CNN reported. And, by taking the garbage out of nature, “you’re doing a good action,” he added.

According to Merriam-Webster Dictionary, “upcycling” is a form of recycling wherein the resultant product is of higher value than the original item. Rather than processing waste into new materials, as traditional recycling does, a product that would otherwise be thrown away can be repurposed in its current state into something new.

Kan strives to spread his message around Mauritius and beyond to inspire others to create less waste.

“I like to inspire the kids, so I tell them a bit why I do these things,” Kan told CNN.

The musician can be seen in the CNN video showing youths how to play his handmade, upcycled instruments. He asks them to guess what they’re made of to “keep it fun.” He hosts workshops and concerts around his home country.

The artivist also posts free video tutorials on his Facebook and Sound Cloud accounts, detailing how to participate in his “trash to music” movement by making an upcycled instrument at home out of rubbish. “Discover how to craft my favourite music instrument called ‘Didgeridoo’ from PVC pipes or cardboard rolls!,” the video invites viewers.

For such a small island, the trash problem is sizable.

“Every year, four hundred thousand tons of waste enters the landfill site at Mare Chicose,” Kan said in a 2019 TEDx talk showcasing his recycled instruments. “I am really concerned about the state of our environment and I try to protect it or make people conscious in my own ways… ” he told CNN.

According to the World Bank, the average Mauritian generates 2.3 kilograms of municipal solid waste per day, or roughly one ton a year – almost double the global average for an urban resident, reported BioReports. As the most densely populated African nation despite its small size, Mauritius does not have space to spare for landfills, BioReports noted.

Tourism, which was a major economy on the island before the pandemic, would also bring more than one million visitors to the island annually, creating even more garbage, BioReports found.

Through his performances with his upcycled instruments, the former electronic music DJ hopes to show people how everyday citizens can make a big difference in the fight against trash.

“I personally think everyone should see the landfill of their region, of their country because it is part of humanity,” Kan told CNN.

In his TEDx talk, Kan encouraged everyone to become aware of the amount of waste that humans create, to reuse things and only buy what’s needed and to remove trash and upcycle it.