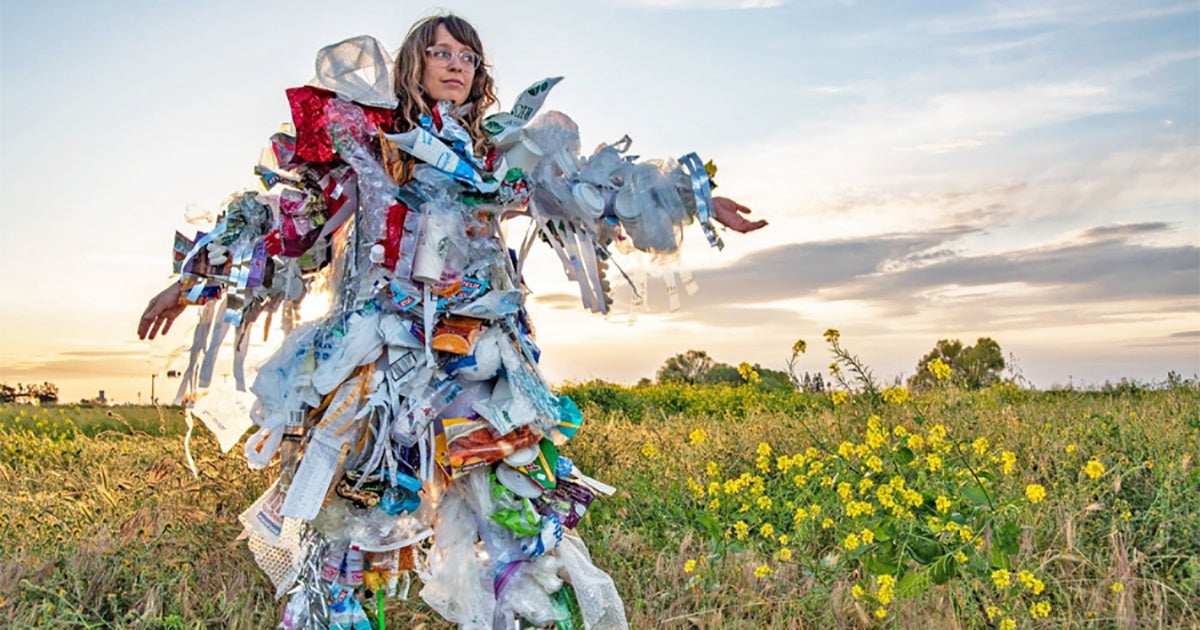 Amid the growing plastic pollution crisis, we see people rising up and taking a stand in a lot of different ways. Plastic pollution protests can range from marching in the streets to more unorthodox methods, such as protest art. Protest art is an important way to create public awareness for issues such as the single-use plastics problem.

Creative consultant, activist and artist, Katie Williams uses art as a way to raise awareness of consumer habits regarding single-use plastics. Her “trash art” with Jen Fedrizzi is publicly staged on the busy streets of San Francisco and forces passersby to take a closer look.

She met photographer Jen Fedrizzi while living together at the Convent Arts Collective in San Francisco. Williams gushed over, “Jen had seen some of my performance art and she asked if I’d be interested to collaborate on the topic of plastic pollution. She absolutely reignited my passion for the environment.”

The duo first staged a performance art piece on the day after Thanksgiving in 2017 called, Our Sophisticated Denial, which took place in the street front window of the Artists’ Television Access Gallery on busy Valencia Street in San Francisco’s Mission district. For this performance, Williams and Fedrizzi “drowned” in waste over the course of 5 hours.

“We actually collected waste from our arts collective, and in that process of collecting waste, rather than throwing it in the bin, we saw firsthand just how much waste was being created. It was shocking to see how much trash you’ve accumulated. Once you see it, you cannot unsee it.” Williams said.

A year later, Williams and Fedrizzi took the project to another level and launched, What Remains? in which they used their collected waste to create costumes made of trash. Williams also created original music for this performance piece, which included songs about plastic pollution. “I wanted to try to reach people on a different level,” Williams said, “It’s easy to share information about plastic pollution, like, X amount of plastic is created, but I wanted to get to the heart of the issue and touch people on a more emotional level.”

Her song, Where is Away, from this performance uses lyrics to awaken people into thinking more about their waste habits:

Williams once gave a statement in her art pieces that speaks volumes:

“I believe that sharing vulnerability can be powerful. For me, it was a vulnerable process to collect my own trash and then wear it for people to see. I’m not zero waste, I’m not perfect. Most people aren’t. I want the system to change so that we all have better choices that are more sustainable than single-use plastics.”

Beyond creating art pieces out of trash, Williams and Fedrizzi also organized a global beach cleanup and brand audit in collaboration with The Surfrider Foundation, All One Ocean and Zero Waste Youth USA in March of 2019.

“A brand audit is a little different from a regular beach cleanup,” Williams explained, “For a brand audit, you sort the trash and pile it up by the company that created it. At the end, you take photos and post them online tagging the companies. This lets them know that we are holding them accountable and makes their branding synonymous with trash. We want to force corporations to change to alternatives to single-use plastics.”

The brand audit toolkit is available from Break Free From Plastic and can be used for any type of cleanup.

Williams also manages a group on Facebook that posts daily actions for group members to take, such as emailing companies or signing petitions.

She created the group as a response to the many Zero Waste groups on Facebook, which place an emphasis on individual actions. “I wanted to focus on corporate accountability. I believe that if enough consumers write in and voice their demands, we can make companies listen.”

You can join the Stop Plastic! Act Now group on Facebook.

From her years of experience traveling and working around the world, Williams came to realize that people, at their very core, are all the same.

“We share the same desires, wishes, and sorrows,” she recognized, “And of course we also have rich diversity and complexity, but at the heart of it, I feel we all share the same human goodness.” That is a good thing as it gives us more chance to unite and collaborate towards the same goals.

“We see people all over the world right now standing up for plastic pollution and climate change,” Williams said, “It represents the goodness of people. We do care.”

So many possibilities are out in the horizon and Williams is simply enjoying her free time working as a communications consultant, plotting her next protest art projects. For now, her latest project emphasizes love and how it transcends beyond borders, languages and anything that divides us.

Rachelle Adelante is a volunteer and contributing writer with Greenpeace USA.