Transformative Climate Action Is Possible — if Polluters Stay Away 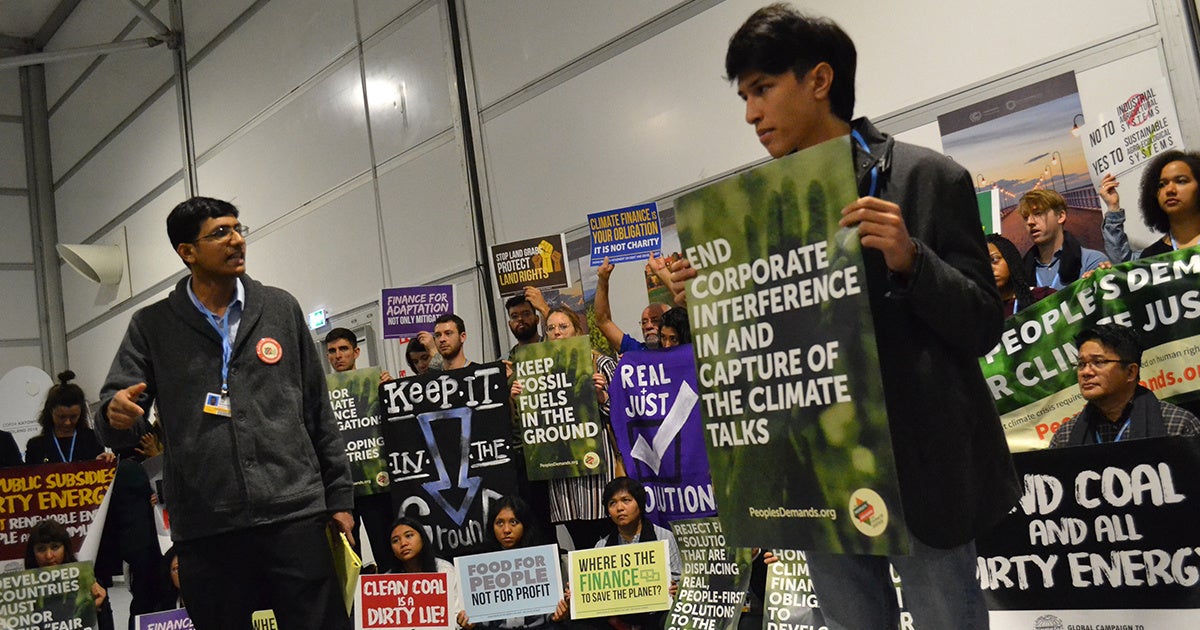 That was before the release of two reports in the fall by scientists commissioned by the United Nations and the U.S. federal government. Both reports painted a dire picture of the coming climate catastrophe and a clear timeline. They warned that if we don’t take drastic action to cut emissions globally, we will face global catastrophic effects of climate change. According to the U.N., we have about a decade. That’s no time at all.

So it makes sense that at the very end of 2018, even as global greenhouse gas emissions rose alarmingly, two bold plans for climate action took hold of the public imagination: the international People’s Demands for Climate Justice, and in the U.S., the Green New Deal. But in order to move these plans from visions to actual policies that are just and effective, we must address the largest obstacle that lies between today’s status quo and a livable future for all: the influence of the fossil fuel industry on climate policy.

Both the People’s Demands and the Green New Deal offer possibilities for bold, visionary and just climate solutions. The People’s Demands call for keeping fossil fuels in the ground globally, advancing people-first solutions at the U.N., and providing resources to countries and communities that have done the least to cause climate change—and which are currently bearing the brunt of its effects.

The Green New Deal resolution introduced by Rep. Alexandria Ocasio-Cortez and Sen. Ed Markey envisions a rapid drawdown of greenhouse gas emissions, the creation of millions of well-paying jobs, and the advancement of equity and justice for communities on the front line of climate change.

In the U.S., the Green New Deal has taken hold of the progressive imagination. Globally, the People’s Demands have become a rallying cry for hundreds of thousands of people and hundreds of organizations, including at the last U.N. climate treaty talks.

This growing call for action can’t be underestimated. We need great social and economic change to fully and justly solve the climate crisis, and no change on this scale happens without public engagement fueling the political will to create such changes. But we also must be clear-eyed about what stands in the way of achieving such transformative change.

Certainly, for the Green New Deal—U.S. politics being what they are—the path from a visionary platform to actual policy is deeply fraught. But perhaps the biggest obstacle to the Green New Deal becoming the transformative set of policies we need it to be is the influence of the fossil fuel industry and other polluting industries.

As David Roberts at Vox points out: “If the [Green New Deal] looks like it has any chance of becoming a reality, it will face a giant right-wing smear campaign, coordinated across conservative media, think tanks, and politicians, funded by effectively unlimited fossil fuel wealth.” Indeed, fossil fuel wealth and influence has, for half a century, stymied necessary climate action at every level of policymaking—from the U.N. to national policy to state legislation. To succeed in moving both the Green New Deal and the People’s Demands from vision to action requires that we effectively counter the fossil fuel and other industries as they bring to bear their full arsenal of money and influence.

This is not to say that the supporters of the Green New Deal have entirely neglected to address the influence of the fossil fuel industry. Proponents have been vocal about excluding members of Congress who have received money from fossil fuel PACs from shaping the plan, which is a good first step. But if it is to live up to its boldest visions, the Green New Deal will need to do far more to safeguard against the influence of big polluters and other industries seeking to profit from our most basic needs.

For one thing, influence peddling by polluting industries doesn’t just come in the form of campaign contributions by fossil fuel PACs to members of Congress. In fact, corporate PAC donations are no longer the most important nor significant route of influence.

Increasingly, corporations wield their influence in a myriad of other ways: from positioning themselves as necessary “stakeholders” in policymaking, to establishing think tanks and front groups to sway public opinion, to selling “public-private partnerships” as a way to muscle their way into policymaking and actual control of public resources. If the champions of the Green New Deal are serious about making a true shift, they must create an impenetrable firewall between industry and policymaking.

Even at the nascent stages, there are warning signs. The Indigenous Environmental Network has highlighted several important ways in which the Green New Deal resolution falls short of getting to the root of the problem, allowing “industries and governments to continue causing harm to Indigenous communities.”

Among other concerns, they point out that the “net-zero greenhouse gas emissions” goal of the Green New Deal opens the door to carbon-pricing schemes, which give Big Polluters the opportunity “to continue the business-as-usual practices of extraction, transport and combustion” under a green-washed guise. Instead, the goal must be to keep fossil fuels in the ground and end subsidies and tax breaks to fossil fuel corporations.

There is also concern regarding industries beyond Big Polluters. Clean water and infrastructure are mentioned throughout the resolution. When it comes to our water infrastructure, the private water industry has long jockeyed to co-opt public funding for profit. It employs a sophisticated PR and political machine to get government infrastructure funds—and too often leaves residents worse off than before, as they are forced to face rate hikes, poor water quality and worker layoffs. We can expect this machine is already rolling to cash in on the Green New Deal.

A Global Mandate to Kick Big Polluters Out

For the Green New Deal to succeed in effectively addressing the threats of climate change, those leading the charge must resist the enormous pressure to consider the fossil fuel industry as “stakeholders.” These are the entities that brought us into this crisis. They cannot be the ones to get us out.

Rather, we must follow the leadership of, and be in deep conversations with, communities currently on the front lines of climate change, who have been developing true and just solutions, as pointed out in a recent letter on the Green New Deal to Representative Ocasio-Cortez and other members of Congress. This includes Indigenous communities, communities of color and low-income communities in the U.S. and around the world. After all, climate change is a global problem. No single country, no matter how visionary, can solve it alone.

This is why the People’s Demands were collectively developed by, and rooted in, climate justice organizations and people’s movements around the world. At the heart of these demands is a recognition that big polluters are the primary cause of the lack of progress on international and national climate solutions.

For decades, using every weapon in their arsenal, big polluters have prevented the U.N. climate treaty from facilitating bold climate action—from a smear campaign targeting the scientists of an early U.N. climate report, to putting industry representatives on delegations, to all-out sponsoring the talks, and much more.

Therefore, ending big polluters’ influence on the U.N. climate treaty process and advancing a conflict-of-interest policy is a core component of the People’s Demands. Such a policy, text or mechanism would protect global climate policy from obstruction by Big Polluters and would urge governments to begin insulating policymaking from industry influence.

Having this kind of directive at the international level provides significant resources, leverage and political will to do the same at the national level. We’ve seen that with the World Health Organization’s global tobacco treaty (formally known as the Framework Convention on Tobacco Control), which safeguards public health policymaking from the influence of the tobacco industry. Since the adoption of the treaty in 2003, countries around the world have implemented policies keeping the tobacco industry away from the policymaking table. This has, in turn, enabled the implementation of lifesaving tobacco control measures, like graphic health warnings, bans on advertising and tobacco taxes.

To be sure, the specifics of climate change and the tobacco epidemic differ greatly, and the fossil fuel industry is more powerful than the tobacco industry. Nevertheless, successfully kicking big polluters out of the U.N. climate treaty process could pave the way for countries around the world—including the U.S.—to adopt strong firewalls between the fossil fuel industry and climate policymaking. Doing so will also give the Green New Deal the best shot at succeeding.

If 2018 was the year when many people in the Global North finally woke up to the existential danger posed by climate change, 2019 just might be the year that politicians around the world heed the call for visionary climate action—and begin the process of disentangling climate policymaking from the clutches of corporate capture. This just might be the only way we achieve the swift and massive change we need.

Patti Lynn is the executive director of Corporate Accountability.