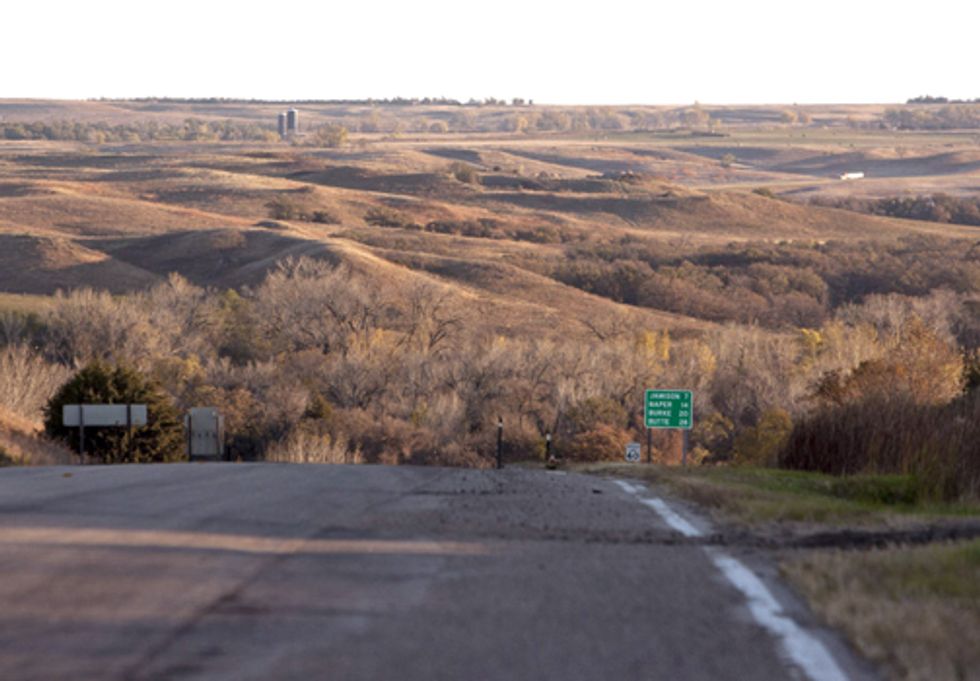 News broke today that TransCanada plans to re-apply for a Presidential Permit for the cross-border Keystone XL tar sands pipeline sometime tomorrow.  However, all indications show that the new application breaks its promise to Nebraska consumers and landowners by failing to avoid the Sandhills or Ogallala aquifer. TransCanada appears to be coming back to the president without any new rationale for approval. Most significantly:

Instead of increasing the tar sands supply for the U.S., in the coming years Keystone XL will merely redirect supply to the Gulf so that it can be exported and sold for higher prices on the global market. The proposed route makes it clear that the pipeline contents are not intended for domestic distribution. Rather, the straight path from Canada to the Gulf facilitates Canada’s effort to position itself as a top supplier on the global market. A recent Inside Climate News piece examines the more than 10,000 miles of planned pipelines that would send an additional 3.1 million barrels a day of Alberta's oil to export markets.

Evidence abounds that the Keystone XL tar sands pipeline is an export pipeline intended to go through—but not to—U.S. markets. When Senator Tester (D-MT) advocated for a requirement that oil from Keystone XL stay in the country, TransCanada’s executives refused to support that prerequisite and commit to not selling oil outside of the U.S. TransCanada’s deceptive practices deserve further scrutiny and as a BOLD Nebraska report makes clear, America cannot afford to entrust our economic future to a company with TransCanada’s record.

Moreover, the export nature of the Keystone XL pipeline will be detrimental to U.S. consumers who are likely to be subjected to higher prices at the pump. TransCanada itself acknowledged to the Canadian government that the pipeline would increase the cost of crude oil in the U.S.. TransCanada brags that the pipeline is “expected to realize an increase in the heavy crude price of approximately $3.00 per barrel by avoiding a discount” at the U.S. Gulf Coast. The market price of heavy crudes should rise an additional $3.55 per barrel when the new pipeline “relieves the oversupply situation in the Midwest.”

Despite assurances to the contrary, and Gov. Dave Heineman’s (R-NE) own concerns about water safety, the new corridor still endangers some of the Nebraska’s most sensitive environmental regions—including the Sandhills and the Ogallala aquifer.

While TransCanada’s proposed corridor avoids the Sandhills of southwest Holt County, it still crosses through northern Holt County. According to Inside Climate News and local landowners, the soil here “is often sandy and permeable and the water table is high—the same characteristics that make the Sandhills so vulnerable to the impact of an oil spill. In some parts of the new corridor, the groundwater lies so close to the surface that the pipeline would run through the aquifer instead of over it.” Even the Nebraska Department of Environmental Quality (DEQ) originally labeled the entire northern part of the state “Sandhills” before being pressured by TransCanada to call that region simply “North-Central Nebraska."

Aquifer Maps:
Shows route will go through Ogallala Aquifer where the water table is high.

Maps of the proposed corridor clearly show that though the route would avoid what DEQ now calls the Sandhills, it would still pass through the area originally designated as the Sandhills—a designation that is affirmed by soil tests and farmer anecdotes.

Even more obvious is that the new corridor still runs directly through the Ogallala aquifer. Despite Gov. Heineman’s August 2011 comments that, “I am opposed to the proposed Keystone XL pipeline route because it is directly over the Ogallala Aquifer,” Gov. Heineman now backs the Keystone XL, though he has yet to provide an explanation for why his litmus test has changed so dramatically.

A University of Nebraska at Lincoln study found that the pipeline is expected to experience up to 91 significant spills over a 50-year period—a number further compounded by the fact that the route passes through the aquifer, which, as the country’s largest source of freshwater, provides 30 percent of the groundwater used for irrigation in the U.S. and provides drinking water for 2 million people.

“Water has always been first and foremost in our mind,” said Tom Genung of Hastings, Neb., who owns ranchland in Holt County. “We were promised everything would be okay if [the pipeline] got out of the Sandhills ... but it's not.”

Meanwhile, TransCanada face another uphill battle as they continue to push for construction of the southern segment. In Texas and Oklahoma TransCanada is seeking a single “nationwide” permit from the Army Corps for the southern segment of the Keystone XL tar sands pipeline. However, in fall 2011, the U.S. Environment Protection Agency (EPA) determined that the southern segment is ineligible for a nationwide permit and must obtain individual Clean Water Act permits for approximately 60 of the pipeline’s crossings of U.S. waterways. EPA cites wetlands and stream loss of ½ acre at these crossings—an environmental impact that requires scientific review and public input.

Good for TransCanada, Bad for Americans

The Keystone XL tar sands pipeline will be good for TransCanada shareholders and good for a few Gulf refineries—including a Saudi-owner refinery—but is not in the best interests of American consumers. The president stood up for America when he stood up to TransCanada earlier this year and denied the pipeline permit.

What was a policy debate has become a political game. Yet Americans’ health and livelihood should not be subject to partisan gamesmanship in an election year.  The massive risks that would be borne by America would reward Big Oil and the world market, not American consumers and workers. Due to existing capacity, we don’t even need another tar sands pipeline—let alone one that is so heavy on risk and so light on rewards.