TransCanada's Latest Extreme Energy Pipelines in the U.S. and Canada 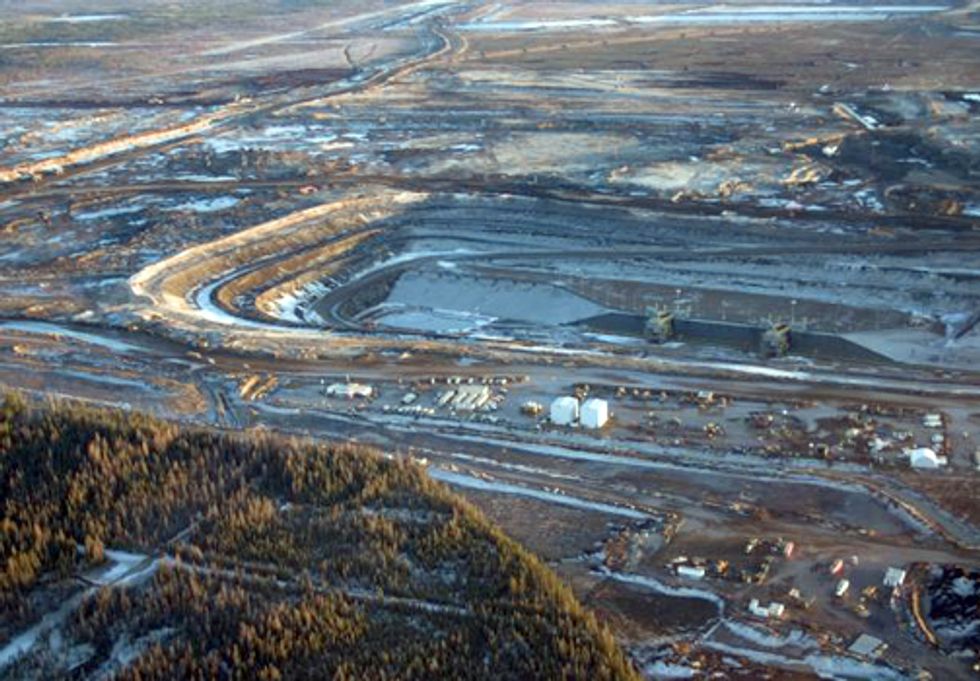 TransCanada was once in the limelight and targeted for its Keystone XL pipeline project. Now, with few eyes watching, it is pushing along two key pipeline projects that would bring two respective forms of what energy geopolitics scholar Michael Klare calls "extreme energy" to lucrative export markets.

Pipeline one: The southern segment of the originally proposed TransCanada Keystone XL tar sands pipeline, popularly referred to as the Cushing Extension, but officially referred to as either the Gulf Coast Project or the Cushing Marketlink pipeline. This pipeline will carry tar sands crude, or "dilbit," extracted from Alberta, Canada's Athabasca oil sands project southward first to Cushing, Okla., and then to Port Arthur, Texas, where it will be shipped off to global export markets.

While the northern Alberta-to-Cushing segment has been punted until after election season by President Barack Obama's U.S. State Department, the Cushing-Port Arthur segment has been rammed through in a secrective manner by various Obama regulatory agencies, as pointed out recently by Friends of the Earth-U.S. (FOE-U.S.).

FOE-U.S. explained in a long blog post published on June 5, well worth reading in its entirety:

Three Army Corps of Engineers district offices—in Tulsa, OK, Ft. Worth and Galveston, TX—are charged with reviewing TransCanada’s applications for the southern leg of Keystone XL. The Army Corps of Engineers has confirmed that TransCanada submitted its applications to the Corps district offices in Galveston and Tulsa for Nationwide Permit 12 (NWP 12) coverage on May 11, triggering a 45-day deadline by which the Corps must approve or deny the permits. The Corps can approve or reject the permits before the 45 days are over but if the agency does not respond within the 45 days, the permits are automatically approved by default, allowing TransCanada to proceed with construction.

In response to mounting media scrutiny from reporters like Elana Schor at E&E and Ramit Plushnick-Masti at the Associated Press, Corps officials recently confirmed that the 45 days will run out on June 26 for the Galveston office and on June 28 for the Tulsa office, while the Ft. Worth office is still evaluating TransCanada’s application materials for that district.

The key nugget here: with or without the Keystone XL pipeline, there are already several Canada-U.S. border-crossing tar sands pipelines that snake their way to Cushing and then down to Port Arthur for eventual exportation. Examples include the 2009 Obama administration-approved Enbridge Alberta Clipper Pipeline, Enbridge's Line 9 Pipeline (referred to as "Keystone XL East," by some), and TransCanada's original and already-existing Keystone Pipeline.

FOE-U.S.'s Kim Huynh explaind the costs and consequences of the scheme quite cleary, writing in a blog post:

As the clock ticks on TransCanada’s southern permit applications, one thing is very clear: The Obama administration’s decision on the Keystone XL pipeline will have far-ranging consequences for communities’ drinking water, public health and local economies all along its path as well as for our shared climate. The pipeline, in carrying the world’s dirtiest oil—tar sands oil—to the Gulf Coast for export, would help ignite the carbon bomb in Canada’s tar sands, further fueling climate disruption.

The project would inflate oil industry profits while threatening our heartland with costly spills, amplifying the already-debilitating air pollution in refinery communities on the Gulf Coast, and vastly drive the expansion of climate-destabilizing tar sands development and consumption.

Reuters wrote of the venture,

TransCanada, Canada's No. 1 pipeline company, said it would design and build a 700-kilometer (434-mile) line capable of shipping 1.7 billion cubic feet of gas per day from Dawson Creek in northeast British Columbia to Kitimat, where three LNG plants, including Shell's facility, are planned.

The line will run near Enbridge Inc's Northern Gateway oil pipeline project, which will also end at Kitimat. Currently in regulatory hearings, Northern Gateway faces strong opposition from environmental groups and many of the aboriginal communities along its planned route.

Unmentioned by Reuters, the pipeline will also run next to the EOG Resources, Apache Canada, EnCana Corporation-owned Pacific Trails Pipelines, set to send gas fracked in the Horn River Shale basin westward to Kitimat and on to Asian export markets.

Though the North American business trendlines for coal, unconventional oil and gas, and tar sands crude all point to a boom in exports, the dirty energy industry's public relations line has been that the domestic fossil fuel extraction rush has ushered in a new source of "ethical oil" (as opposed to that dastardly OPEC oil), which will present North America with "energy security" and "energy independence."

This couldn't be further from the truth. The fossil fuel industry is run by multinational corporations with no loyalty to any given nation-state (hence, "multinational").