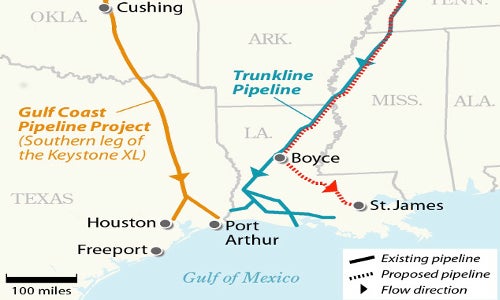 TransCanada announced today the start up of the 485-mile southern segment of the Keystone XL, now called the Gulf Coast Pipeline, which runs from Cushing, OK, to refineries on the Gulf Coast of Texas. 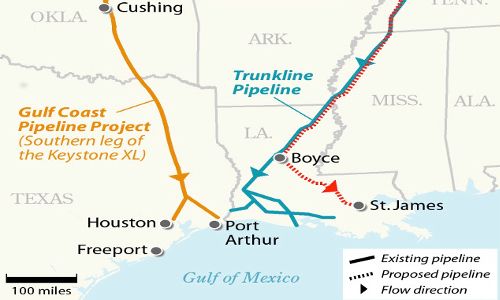 In anticipation of TransCanada’s announcement, Texas landowners launched a new oversight network today, Texas Pipeline Watch, to arm landowners and citizens along the route with cameras to document every spill, leak and disturbance.

“Today’s announcement is a painful example of President Obama’s all of the above energy plan at work: polluted air and water, carbon pollution and the ever present threat of poisoned drinking water for millions of Texas and Oklahoma families,” said Michael Brune, executive director of the Sierra Club.

“Tar sands is more corrosive, more toxic and more difficult to clean up than conventional crude. Coupled with lax oversight and TransCanada’s dismal safety record, this pipeline spells bad news for farmers and families whose land, health and safety were forfeited so that oil companies can reach export markets with their deadly product.”

According to Bold Nebraska, citizens and landowners have long had a strong network with each other surrounding Keystone XL, including:

“The Corps of Engineers allowed TransCanada to cross thousands of waterways and wetlands without adequate review or safety precautions,” Brune continued. “Emergency responders are ill-prepared for tar sands pipeline failures like those that devastated Mayflower, AR, and Kalamazoo, MI. And the export of this tar sands crude overseas means that along with more carbon pollution and more poisoned air and water, Americans will see higher gas prices.”

“As Nebraskans fight Keystone XL, we stand with Texas and Oklahoma farmers and ranchers facing a direct threat to their livelihoods,” said Jane Kleeb, executive director of Bold Nebraska. “President Obama made the wrong decision to fast-track this export pipeline and citizens will keep TransCanada accountable for every leak, spill and tragedy on families’ land and water.”

“A shameful day–and a reminder that the Obama administration has boasted too often about how many pipelines they’ve built, how much land they’ve opened to drilling and mining. Expediting KXL south was not the mark of a president who really ‘gets’ climate change,” said Bill McKibben, co-founder and president of 350.org.

Here is a slideshow of photos during a protest to stop the southern leg of the Keystone XL pipeline at the White House on Jan. 15.