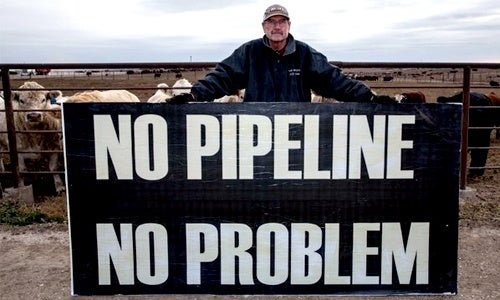 TransCanada announced Wednesday that they are throwing the corporate equivalent of a temper tantrum over the rejection of the Keystone XL tar sands pipeline by filing a lawsuit under NAFTA (North American Free Trade Agreement), in hopes of forcing American taxpayers to pay them billions of dollars to recoup their losses on the ill-fated project that they spent seven years trying to bully the U.S. into letting them build.

The company said it is looking to recover USD$15 billion in costs and damages as a result of what it says is a breach of obligations under Chapter 11 of NAFTA. TransCanada asserts that the “U.S. administration’s decision to deny a presidential permit for the Keystone XL pipeline was arbitrary and unjustified.”

Jane Kleeb of Bold Nebraska disagrees. “The rejection of Keystone XL was justified in order to protect the land, water and property rights of farmers and ranchers,” she said. “This desperate attempt by TransCanada is a move to show their shareholders they have a viable project when they have hit a dead end.”

As President Obama affirmed in his rejection of the pipeline, KeystoneXL was not in America’s national interest. It would not have contributed to our economy, lowered gas prices or contributed to our energy security, and it would have posed a serious threat to land and water along the route and to the climate by significantly increasing carbon emissions.

“This isn’t going to get the pipeline built, and it is going to remind Americans how many of our rights these agreements give away,” Bill McKibben, 350.org co-founder, said. “The idea that some trade agreement should force us to overheat the planet’s atmosphere is, quite simply, insane. But the oil industry is so used to always winning that I fear this kind of tantrum is predictable. Corporate power is truly out of control.”

This lawsuit will do nothing to change Keystone’s fate; it will merely serve to remind the American people that companies like TransCanada are working against their interests, and that trade agreements like the TPP (Trans-Pacific Partnership) would only strengthen their ability to do so.

“Keystone XL is dead and nothing about this legal maneuvering changes that,” Michael Brune, executive director of the Sierra Club, said. “But, TransCanada ought to be ashamed of trying to extract billions in U.S. taxpayer dollars to boost its profits after being stopped in its tracks from building a dirty, dangerous tar sands pipeline in our backyards.”