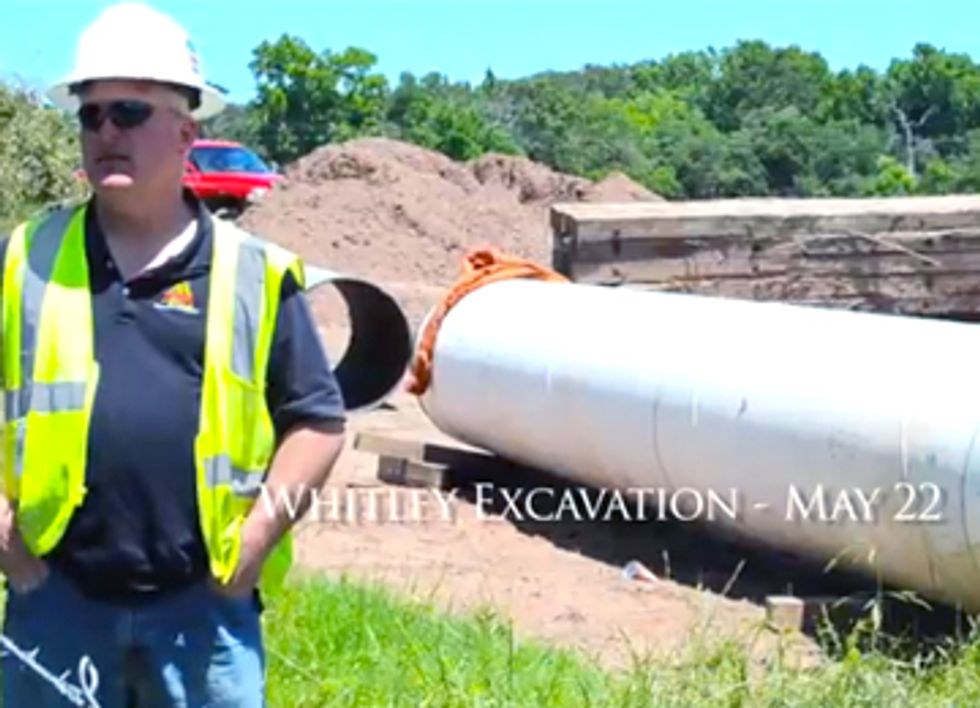 Dozens of anomalies, including dents and welds, reportedly have been identified along a 60-mile stretch of the southern segment of the Keystone XL pipeline, north of the Sabine River in Texas.

In the past two weeks, landowners have observed TransCanada and its vendor, Michels, digging up the buried southern segment of the Keystone XL pipeline on their properties and those of neighbors in the vicinity of Winnsboro, TX. Some of the new pipeline has been in the ground on some owners’ land for almost six months. It is believed that problems identified on this section of the Keystone XL route must have triggered the current digging, raising questions from landowners about the safety of the pipeline and the risk to personal property and water supplies.

Landowners are concerned that this digging is indicative of faulty pipeline along the route that could potentially leak and threaten water supplies, and have requested TransCanada and the U.S. Department of Transportation’s Pipeline and Hazardous Materials Safety Administration (PHMSA) to provide more information about the work.

The anomalies and other problems were reported to landowners along the line and a Public Citizen consultant by several TransCanada vendors, including an independent inspector and a right-of-way representative.

The southern segment is slated to carry tar sands oil from Cushing, OK, to the Gulf Coast for export.

The existing leg of Keystone spilled more in its first year than any other first-year pipeline in U.S. history, springing leaks 12 times.

“Here this pipeline has been in the ground for months and now they’re here again,” noted Winnsboro landowner David Whitley. “An independent TransCanada inspector has told me there are all these anomalies on land up and down the pipeline along this 60-mile stretch, including the one on my property they are digging up now.”

“The digging they are doing now next door makes us wonder how more likely a spill might be if they are having to dig up this pipeline now before they even put anything through it,” said Blair Wright, who lives adjacent to where the pipeline crosses his daughter’s land. “We’re concerned about what may happen to our water well and our farm pond should a leak occur.”

The pipeline problems are marked with stakes. A marked section will have a stake that reads “Anomaly” and a number on one end of the section to be excavated, said Public Citizen’s Rita Beving, who has been working with landowners along this and other tar sands pipelines in Northeast Texas. A nearby second stake will often read “Dent” or “Weld,” she said. Residents saw these stakes and pipeline spray painted with “Dent” and “Cut Out,” and observed contractors spraying the new pipe with coating.

“The company does not have to reveal what happened, but seeing a completed pipeline having welds and dents cut out is reminiscent of other infamous low-quality pipelines built by a variety of companies that PHMSA has identified in the last few years,” said former TransCanada engineer Evan Vokes. “The odds are not favorable to avoid a leak when we are seeing problems such as these with a newly constructed pipeline, and a leak poses dangers for the people who live along this route.”

While these landowners from the Winnsboro area have spoken up about what is happening on their land, other digs clearly are visible from the public right-of-way along the 60-mile section being excavated.

“At the end of the day, landowners want answers,” Beving said. “They were shocked to see crews back on their land after pipeline had been buried for months, and they want to be sure these new excavations don’t signal an increased risk of spills on their property. There are too many unanswered questions, and I think we need PHMSA to look into what’s going on with this pipeline.”