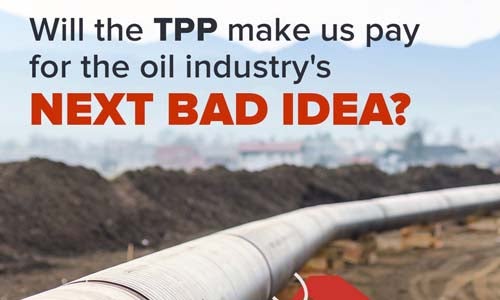 On June 24, foreign oil company TransCanada filed a lawsuit against the U.S. under NAFTA, the North American Free Trade Agreement, arguing that the U.S. rejection of the Keystone XL pipeline violated NAFTA’s broad rights for foreign investors by thwarting the company’s “expectations.” As compensation, TransCanada is demanding more than $15 billion from U.S. taxpayers.

TransCanada’s case will be heard in a private tribunal of three lawyers who are not accountable to any domestic legal system, thanks to NAFTA’s “investor-state” system, which is also included in the proposed Trans-Pacific Partnership (TPP). The controversial TPP would empower thousands of additional corporations, including major polluters, to follow TransCanada’s example and use this private tribunal system to challenge U.S. climate and environmental policies.

TransCanada’s Request for Arbitration follows the Notice of Intent to submit a claim to arbitration that it filed on Jan. 6.

TransCanada’s attempt to make American taxpayers hand over more than $15 billion because the company’s dirty Keystone XL pipeline was rejected shows exactly why NAFTA was wrong and why the even more dangerous and far-reaching Trans-Pacific Partnership must be stopped in its tracks.

The TPP would empower thousands of new firms operating in the U.S, including major polluters, to follow in TransCanada’s footsteps and undermine our critical climate safeguards in private trade tribunals. Today, we have a prime example of how polluter-friendly trade deals threaten our efforts to tackle the climate crisis, spotlighting the need for a new model of trade model that supports rather than undermines climate action. We urge our members of Congress to learn from this historic moment and commit to reject the TPP.

Here’s more information on the TPP: