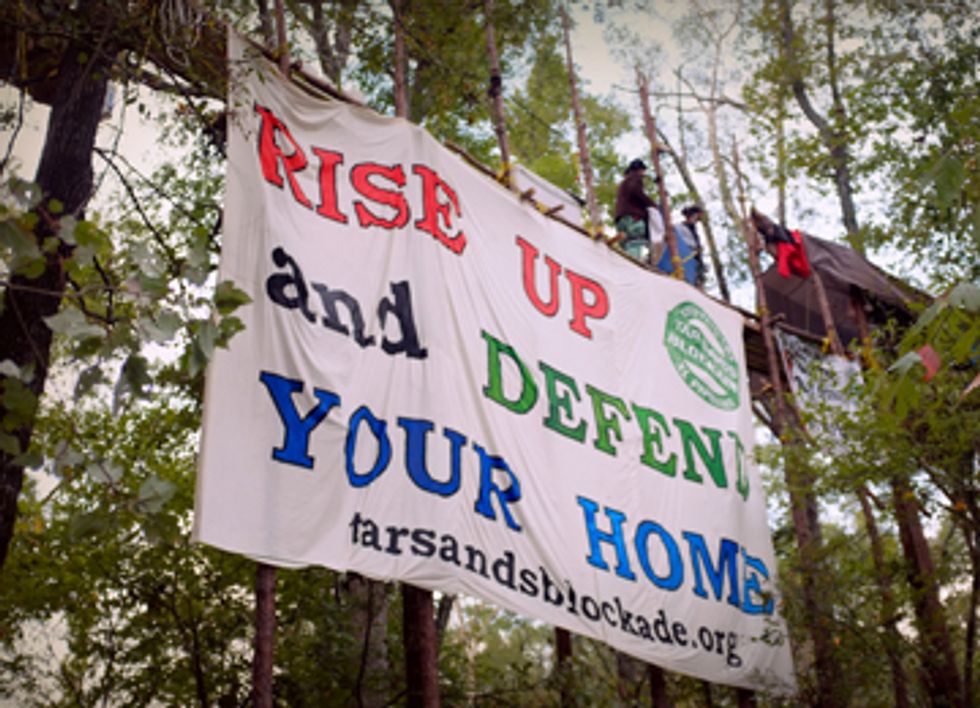 “This is clear evidence of the collusion between TransCanada and the federal government assisting local police to unlawfully monitor and harass political protestors,” said Lauren Regan, legal coordinator for Tar Sands Blockade and executive director of the Civil Liberties Defense Center. “These documents expose the truth that the government is giving the nod to unlawful corporate spying. By slinging false allegations against peaceful activists in this presentation, TransCanada puts them at risk of unwarranted prosecution.”

Although TransCanada’s presentation to authorities contains information about property destruction, sabotage and booby traps, police in Texas and Oklahoma have never alleged, accused or charged Tar Sands Blockade activists of any such behaviors. Since August 2012, Tar Sands Blockade has carried out dozens of successful nonviolent direct actions to physically halt construction of the Keystone XL pipeline in Texas and Oklahoma. All of these acts, as well as every pipeline protest in Nebraska, have maintained strict commitments to nonviolence.

“Try as TransCanada might to slander Tar Sands Blockade and our growing grassroots movement, we know who the real criminals are,” said Ron Seifert, a spokesperson with Tar Sands Blockade who was pictured in the slideshow. “The real criminals are those profiting from this deadly tar sands pipeline by endangering families living along the route and pumping illegal levels of air toxins into fence-line communities.”

“If anything, this shows the effectiveness of campaigns to stop the Keystone XL pipeline and fossil fuel extraction as a whole,” said Scott Parkin, an organizer with Rising Tide North America and a non-violence trainer also pictured in the slideshow. “We’ve been fighting coal, oil and natural gas for a long time using these time-honored tactics and strategies. We’ll continue to use them precisely because they have been so effective in making change throughout American history.”

Grassroots resistance to Keystone XL is growing in Texas and Oklahoma where TransCanada is currently digging up freshly laid sections of the pipeline that failed integrity inspections. The East Texas Observer reports that at least 70 “anomalies,” including dents and shoddy welds in the pipe, were identified in a 60 mile span, and in some areas these imperfections occur at a rate of three per mile.

“A discovery like this presentation reveals that TransCanada has no problem lying to authorities and intentionally misleading the public in pursuit of its own private gain,” says Seifert. “If TransCanada officials cannot be trusted to tell the truth about the peaceful nature of Keystone XL protestors, why should we believe they’ve told the truth about the integrity of their pipeline and the real threats it poses to the hundreds of rivers and creeks that it crosses?”

The full slideshows are available at Tar Sands Blockade's website.