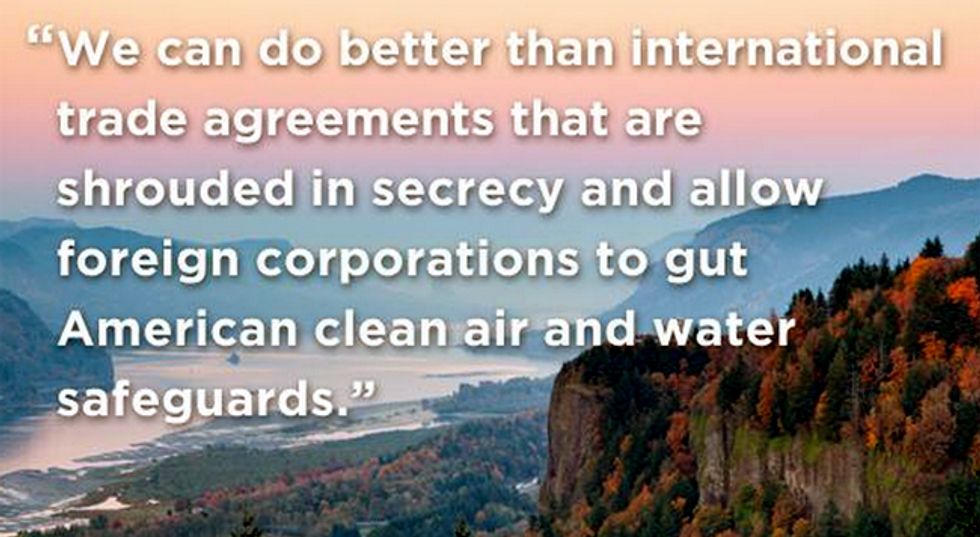 The U.S. is at the tail end of negotiating the Trans-Pacific Partnership (TPP)—a massive trade deal with Mexico, Canada, Japan, Vietnam and seven other countries. The negotiations have been conducted in secret. Now Congress will soon decide whether to grant the Obama administration "fast track" authority to have the "final" pact approved as is—meaning strict limits on Congressional debate and no amendments. That's a terrible idea for lots of reasons—not least of which is that the TPP could sabotage the ability of the U.S. (and other nations) to respond to the climate crisis.

Senator Elizabeth Warren put her finger on the problem in an op-ed for the Washington Post "Who will benefit from the TPP? American workers? Consumers? Small businesses? Taxpayers? Or the biggest multinational corporations in the world?" Here's a hint: The answer is definitely not "all of the above."

Multinational corporations—including some of the planet's biggest polluters—could use the TPP to sue governments, in private trade tribunals, over laws and policies that they claimed would reduce their profits. The implications of this are profound: Corporate profits are more important than protections for clean air, clean water, climate stability, workers' rights and more.

This isn't a hypothetical threat. Similar rules in other free trade deals have allowed corporations including ExxonMobil, Chevron and Occidental Petroleum to bring approximately 600 cases against nearly 100 governments. Increasingly, corporations are using these perverse rules to challenge energy and climate policies, including a moratorium on fracking in Quebec; a nuclear energy phaseout and coal-fired power plant standards in Germany; and a pollution cleanup in Peru. TransCanada has even intimated that it would use similar rules in the North American Free Trade Agreement to challenge a U.S. decision to reject the Keystone XL pipeline.

Remember how scientists and experts have warned that at least three-quarters of known fossil fuel reserves must stay in the ground in order to stabilize our climate? A new study published in the journal Nature even spells out in detail which reserves must stay untapped, including almost all of Canada's tar sands, all of the oil and gas in the Arctic, nearly half of global natural gas reserves, and 82 percent of global coal reserves. But do trade pacts like the TPP take that into account?

Not a chance. In fact, as a result of the TPP, the U.S. Department of Energy would actually be required to approve more fossil fuel exports. The deal would greenlight fracked gas exports to countries in the pact—including Japan, which is the world's biggest importer of natural gas. A consequence would be more fracking, more pipelines, more export terminals and more climate pollution.

It has never been more urgent for countries to tackle the climate crisis. Now is the time to ensure that the rules of the global economy support climate action. Now is not the time to be rubber-stamping trade deals that could undermine our prospects for a better future and safer climate. Congress has a responsibility to do its job and ensure that trade pacts protect workers, communities, and our climate.

A fast track bill could be introduced any day—so it's time to speak out now. Join me and write to your representative and senators and ask them to oppose fast track legislation for trade deals like the Trans-Pacific Partnership. We can win this fight for a fair economy and a safe climate, but we need all of your help.