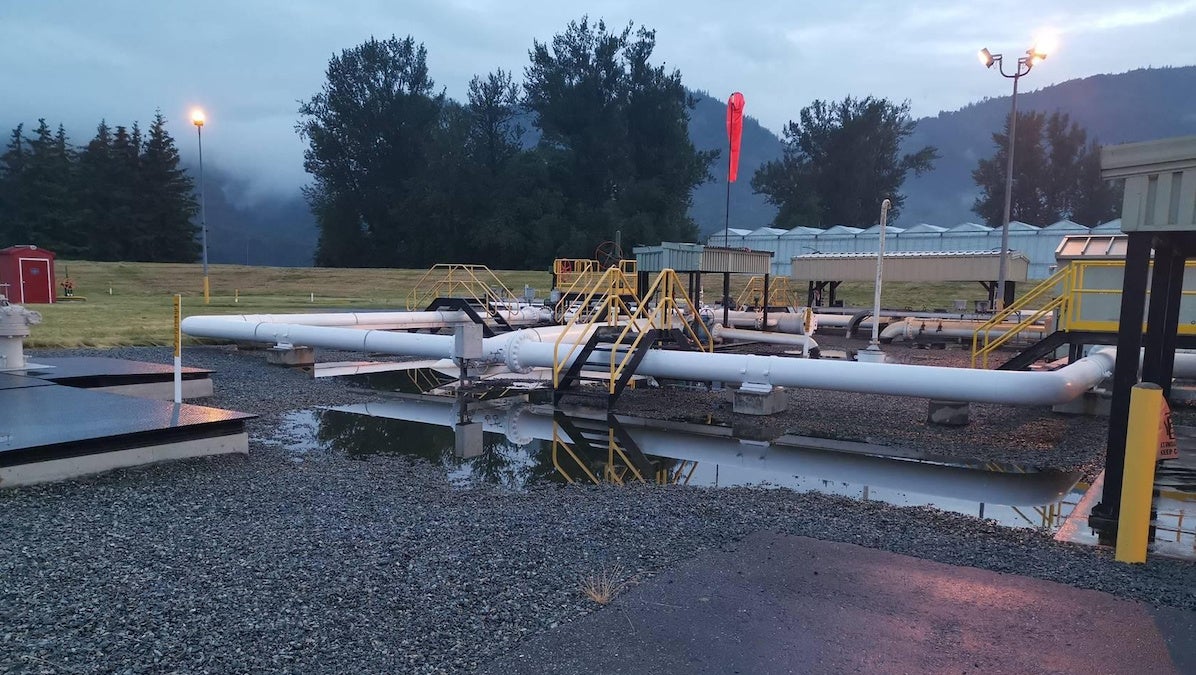 The Sumas Pump Station on June 13, 2020, prior to clean-up. Transmountain

Canada’s Trans Mountain pipeline spilled as many as 190,000 liters (approximately 50,193 gallons) of crude oil in Abbotsford, British Columbia (BC) Saturday, reinforcing concerns about the safety of the pipeline’s planned expansion.

Chief Dalton Silver of the Sumas First Nation told CTV News that the spill occurred on his reserve on fields over an aquifer that supplies his nation with drinking water. It marks the fourth time in 15 years that the pipeline has spilled on his community’s land.

“We cannot continue to have our land desecrated by oil spills,” he said in a statement issued by the Union of British Columbia Indian Chiefs (UBCIC) Sunday.

Stop TMX: Devastating Trans Mountain Pipeline Spill Reinforces Urgency to Halt Further Expansion: “Trans Mountain put in the existing line without the consent of impacted First Nations and we have said no countless times to the proposed expansion." https://t.co/puH08MFqzl pic.twitter.com/mU1oh66wUL

The spill occurred early Saturday morning at the pipeline’s Sumas Pump Station, Trans Mountain told CBC News. The company said no construction work related to the pipeline’s expansion was being done at the time of the spill.

Instead, the spill appeared to have been connected to a fitting on a smaller piece of pipe attached to the main line, the company said in a statement.

“The cause of the incident is under investigation and that will continue,” company spokesperson Ali Hounsell told CTV News. “At this time, it’s believed to be a failure of a small-diametre, one-inch piece of pipe.”

Update from Trans Mountain: Company estimates btwn 940 and 1195 barrels of oil was lost in spill at Sumas Pumping Station — says freestanding oil has been recovered, groundwater and air quality monitoring ongoing as cleanup continues. @CTVVancouver pic.twitter.com/UlJpxq8HX1

“Clean-up is well underway with trucks and crews working around the clock,” the company said in a Sunday afternoon statement. “The free-standing oil has been recovered and is being transported to an approved facility for disposal. The site has permanent groundwater monitoring in place and air monitoring continues. Monitoring has not identified any risk to the public or community.”

The pipeline was initially shut off in response to the spill, but restarted around 2 p.m. local time Sunday.

The company said it was working with local authorities and Indigenous communities on the clean-up, but Silver told CityNews 1130 he had not received timely, accurate updates about the amount spilled or the company’s restarting plans.

“That they’re up and running Sunday afternoon, my sister just read that to me off her phone. That was the first I heard of it, so there you go with the openness and transparency,” Silver said. “I would really rather hear it from those at the incident command post.”

Many Indigenous communities, environmental groups and the BC government oppose the expansion of the pipeline, which would triple the oil it carries from Alberta’s tar sands to the Pacific coast. They are concerned about its impact on the climate crisis, Indigenous sovereignty, local water supplies and endangered orcas that would be harmed by increased tanker traffic.

“We conducted our own assessment of Trans Mountain using leading science and Tsleil-Waututh’s Indigenous law that concluded that oil spills are inevitable, can’t be fully cleaned up, and have devastating effects,” Chief Leah George-Wilson of Tsleil-Waututh Nation said in the UBCIC statement. “This most recent spill is another reminder that the risk is too great to accept. The Trans Mountain pipeline has already spilled more than 80 times since it began operating. This is why we continue to fight the Trans Mountain Expansion in the courts.”

The BC Ministry of Environment told CBC News that Saturday’s spill was “deeply concerning.”

“Our government maintains that the TMX project poses unacceptable risks to our environment, our coast and our economy,” the ministry in a statement.

“The price of oil has plummeted due to decreased demand caused by COVID-19, and yet another pipeline spill is like a nail in the coffin for investors,” UBCIC Vice President Chief Don Tom said in a statement. “The ongoing demonstrations across Turtle Island right now show that people are ready to stand up and defend their beliefs including upholding Indigenous Title and Rights. I have no doubt this will extend to the widespread opposition that already exists to the Trans Mountain pipeline expansion.”