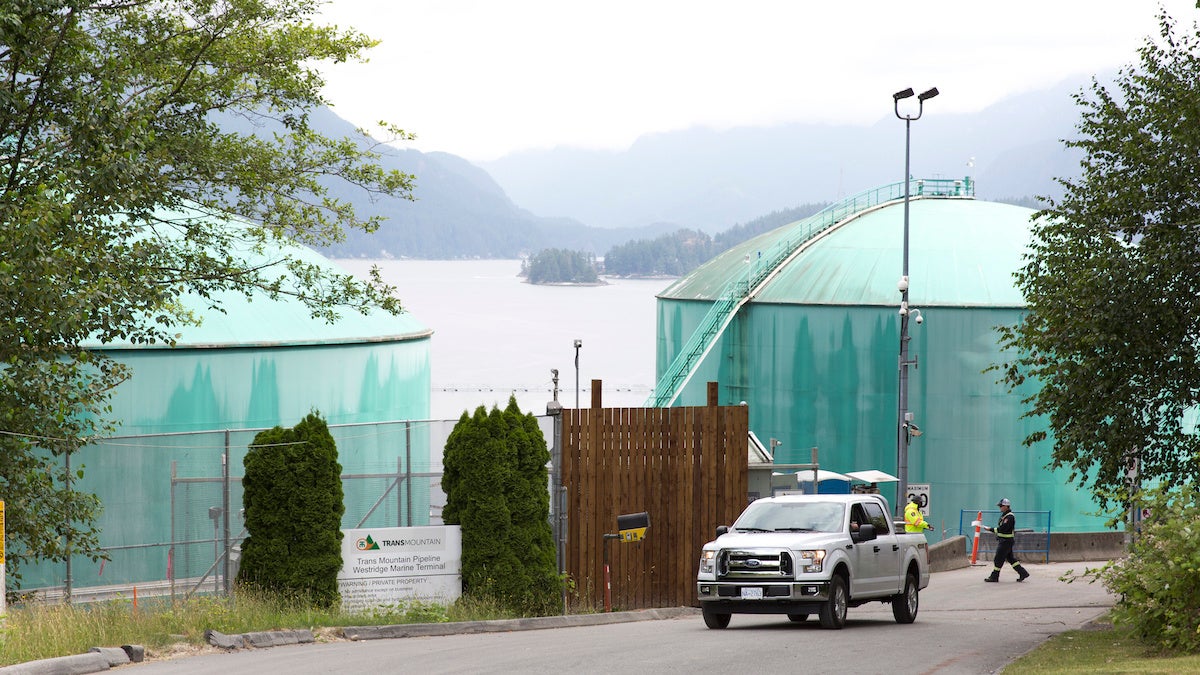 The entrance to the Kinder Morgan Westridge Marine Tanker Terminal is pictured adjacent to the Burrard Inlet in Burnaby, British Columbia on June 20, 2019. JASON REDMOND / AFP via Getty Images

The Federal Court of Appeals in Canada ruled against its First Nations tribes in a unanimous decision, allowing expansion of the controversial Trans Mountain pipeline to proceed. The expansion will triple the amount of oil flowing from the Alberta tar sands to the Pacific coast in British Columbia, as the AP reported.

In its 3-0 decision, the court rejected the claims of the First Nations, saying that the federal government engaged in “adequate and meaningful” consultations with indigenous peoples, as required by law, according to the BBC. It applauded the government’s efforts, saying it was “”was anything but a rubber-stamping exercise,” according to Al Jazeera.

“While the parties challenging the cabinet’s decision are fully entitled to oppose the project, reconciliation and the duty to consult do not provide them with a veto over projects such as this one,” reads Tuesday’s court decision, as the BBC reported.

The legal challenge revolved around whether First Nations had been adequately consulted about the expansion of the 715-mile Trans Mountain route, which currently carries 300,000 barrels of crude oil per day. The government wants it to carry 890,000 barrels per day, according to the BBC. The Canadian government actually bought the pipeline in 2018 to ensure its success and survival.

One of the plaintiffs in the case, the Tsleil-Waututh Nation, said it is considering an appeal of the decision. The indigenous tribes have 60 days to appeal to the nation’s Supreme Court, according to the AP.

“This is not over,” said Tsleil-Waututh Nation spokesperson, Reueben George, to the Global News in Canada. “We are still trudging forward. We have always said we would do everything in our power to stop the pipeline. We have proven it’s not in the best interest of our nation’s standing here.”

The Federal Appeals court heard from four different parties in the case: the Squamish and Tsleil-Waututh nations, the Coldwater Indian Band, and a coalition of smaller indigenous nations from the British Columbia interior. The groups claimed the government did not properly consider their concerns about the project’s effects on their way of life and the environment, as Al Jazeera reported.

George claimed that the court violated the law because it did not allow the Tsleil-Waututh Nation to submit all the information they had, according to the Global News.

However, while the court acknowledged that the indigenous people will be unhappy with the expansion, it felt the government had accommodated them properly.

“The evidentiary record shows a genuine effort in ascertaining and taking into account the key concerns of the applicants, considering them, engaging in two-way communication, and considering and sometimes agreeing to accommodations,” the court said, as Al Jazeera reported. “It is true that the applicants are of the view that their concerns have not been fully met, but to insist on that happening is to impose a standard of perfection, a standard not required by law.”

George, and representatives from the other nations, felt the court did not take a proper look at their evidence.

“We have done studies. Economical assessments. Studies on the orcas. These things were ignored today. Reconciliation stopped today,” said George, as the Global News reported. “This government is incapable of making sound decisions for our future generations. So we are and we will. Even for their children we will take those steps to make sure Canada stays the way it is.”

Chief Lee Spahan of the Coldwater Indian Band, a Nlaka’pamux Nation community in the British Columbia interior spoke of Canada’s consultation with his tribe.

“It wasn’t meaningful. Canada had their mindset already on this decision,” he said, as Al Jazeera reported. “We will continue to stand strong and do everything in our power to ensure our sole source of drinking water is protected.”