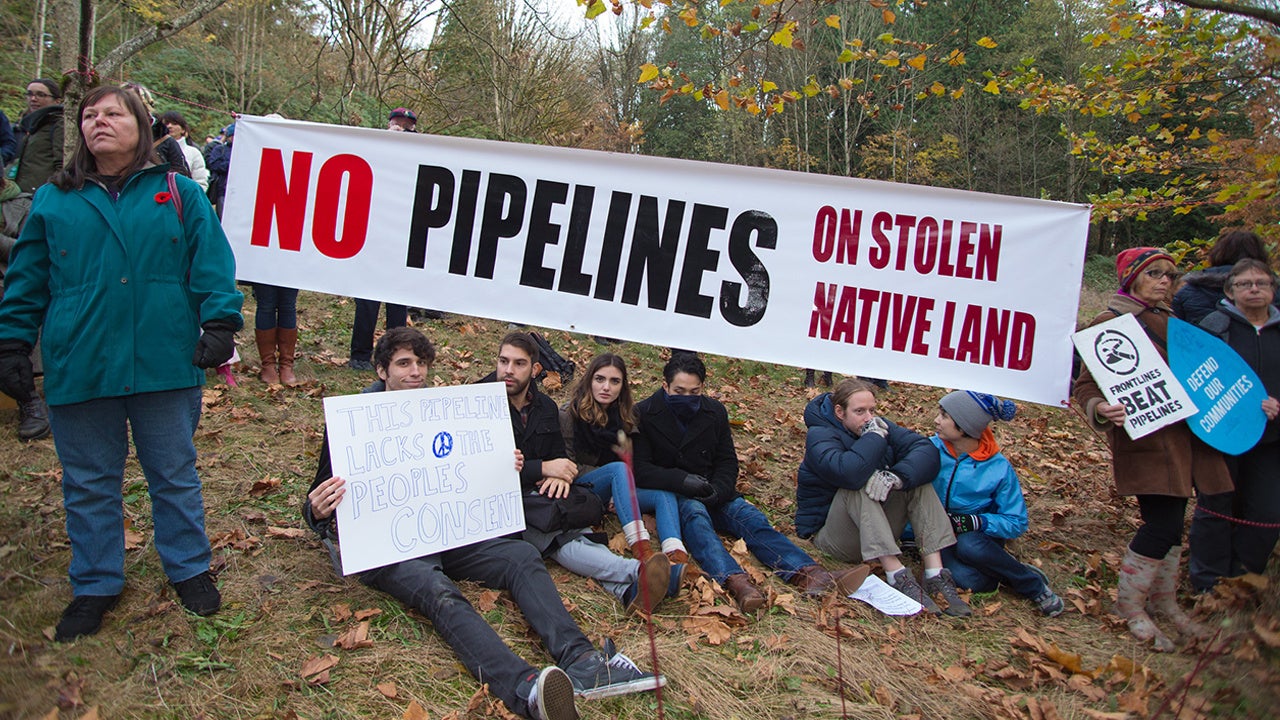 Rainforest Action Network recently uncovered a document that lists the 11 companies that are currently insuring the controversial Trans Mountain tar sands pipeline in Canada. These global insurance giants are providing more than USD$500 million in coverage for the massive risks of the existing Trans Mountain pipeline, and they’re also lined up to cover the expansion project.

The existing Trans Mountain pipeline is a major environmental and public health hazard with a long history of disastrous spills. Earlier this month, 50,000 gallons of crude oil spilled from a pump station located above an aquifer that supplies the Sumas First Nation with drinking water.

The Trans Mountain Expansion Project would multiply these risks tremendously. Though it is officially called an “expansion,” this is no minor renovation. The Canadian government, which owns Trans Mountain, is attempting to build a parallel pipeline that would ship more than 890,000 barrels per year of highly-polluting tar sands crude oil to the coast of British Columbia.

For more than a decade, the expansion of Trans Mountain has been delayed in the face of powerful, Indigenous-led resistance on the ground and in the courts. It has not secured the Free, Prior, and Informed Consent of Indigenous communities that are directly in the pipeline’s route. Right now, the Tsleil-Waututh Nation, Squamish Nation, and Coldwater Indian Band are actively engaged in legal challenges on the project, and land defenders are asserting their rights and title along the route.

Furthermore, pushing forward this project flies in the face of Canada’s commitment to cut emissions in line with the Paris Agreement. To keep global warming under 1.5ºC, we must stop expanding tar sands — and all fossil fuels — and instead invest in a just transition to phase out existing operations.

In the midst of the COVID-19 crisis, the government and corporations are doubling down on their destructive plans to build new fossil fuel projects. Bulldozers that are laying the initial pipe on Trans Mountain have not quieted, even though this construction poses major risks to Indigenous and rural communities in its path, as well as workers that are housed together in close quarters. In Alberta, viral outbreaks have been linked to man camps at tar sands extraction sites, and yet the province’s energy minister proclaimed that now is a great time to construct a pipeline, due to social distancing protocols that limit public protest.

We’re ramping up the pressure on the insurance companies that are providing critical financial support.

Here’s the list of insurance companies that are providing coverage from August 2019 through August 2020:

These insurance policies are being arranged by the biggest insurance broker in the world: Marsh. Fun fact: Marsh is also currently under fire for facilitating insurance for the Adani Carmicheal coal mine in Australia.

Trans Mountain’s insurance policy is up at the end of August, so we are urgently calling on these companies to:

We’ve made some progress. In late June, Talanx indicated that it already dropped the pipeline, and Munich Re signaled that it will not renew its policy. These two German insurers recently adopted policies restricting tar sands business.

A global coalition of environmental NGOs, First Nations, and insurance campaigners is demanding that the rest of Trans Mountain’s insurers follow suit and stop being complicit in the violation of Indigenous rights, spread of COVID-19, and the desecration of sacred waterways and the global climate.

Elana Sulakshana leads Rainforest Action Network‘s campaign pressuring the U.S. insurance industry to stop making the climate crisis worse. She has been active in the climate justice movement for the last eight years, most recently organizing for just and equitable climate policy in Washington State, fighting fracking in the U.K., and campaigning for universities to divest from fossil fuels and reinvest in communities.