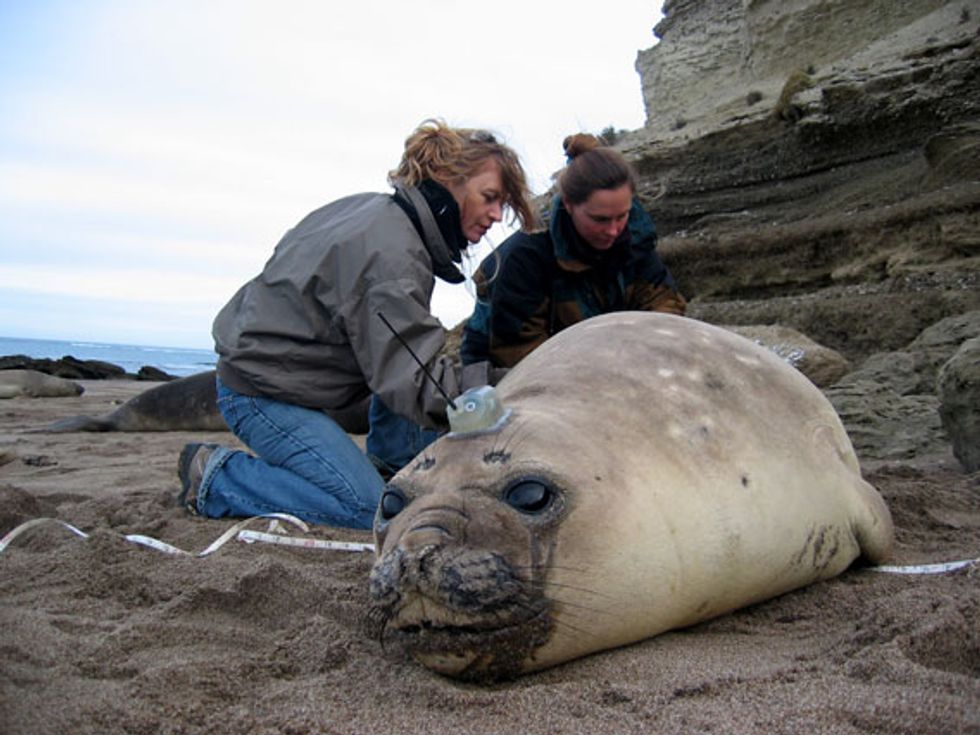 The Wildlife Conservation Society (WCS) tracked a southern elephant seal for an astonishing 18,000 miles—the equivalent of New York to Sydney and back again.

WCS tracked the male seal from December 2010 to November 2011. The animal—nicknamed Jackson—was tagged on the beach in Admiralty Sound in Tierra del Fuego in southern Chile. WCS conservationists fitted Jackson with a small satellite transmitter that recorded his exact location when he surfaced to breathe.

Jackson swam 1,000 miles north, 400 miles west, and 100 miles south from the original tagging location, meandering through fjords and venturing past the continental shelf as he foraged for fish and squid.

During this tracking, the WCS team analyzed the data to better understand elephant seal migratory routes.

Elephant seals are potential indicators of the health of marine ecosystems and may show how climate change influences the distribution of prey species that serve as the basis of Patagonia’s rich marine ecosystem. To protect this vast region, conservationists need to know how wildlife uses it throughout the year.

“Jackson’s travels provide a roadmap of how elephant seals use the Patagonian Coast and its associated seas,” said Caleb McClennen, WCS director for Global Marine Programs. “This information is vital to improving ocean management in the region, helping establish protected areas in the right places, and ensuring fisheries are managed sustainably without harming vulnerable marine species like the southern elephant seal.”

The information WCS gathers will serve as a foundation for a new model of private-public, terrestrial-marine conservation of the Admiralty Sound, Karukinka Natural Park (a WCS private protected area), and Alberto de Agostini National Park. It will help build a broader vision for bolstering conservation efforts across the Patagonian Sea and coast.

“The Wildlife Conservation Society has a long history of working in the spectacular Patagonia region to establish protected areas and advance conservation of its rich wildlife,” said Julie Kunen, WCS director of Latin America and Caribbean. “Individual stories like Jackson’s are awe-inspiring, and also inform the science that will ultimately help protect this region.”

WCS reports that Jackson has returned to Admiralty Sound, the site of the original tagging. Each year, elephant seals haul ashore in colonies to molt and find mates. The satellite transmitter is expected to work until early next year, when it will eventually fall off.

Elephant seals are among the largest pinnipeds in the world, reaching weights of up to 7,500 pounds and lengths of 20 feet.

Since 2004, WCS has owned and managed Karukinka Natural Park, the largest protected area on the main island of Tierra del Fuego. The 728,960-acre park protects the world’s southernmost stands of old growth forests as well as grasslands, rivers and wetlands. WCS, in partnership with the global investment bank Goldman, Sachs & Co., which donated the lands, has transformed Karukinka into a flagship for wildlife conservation in Patagonia. It is now supported by an advisory council made up of local scientific and business sector representatives who provide recommendations on the park’s development and serves as a model demonstrating how the private sector help advance conservation activities worldwide.

The Wildlife Conservation Society saves wildlife and wild places worldwide. We do so through science, global conservation, education and the management of the world's largest system of urban wildlife parks, led by the flagship Bronx Zoo. Together these activities change attitudes toward nature and help people imagine wildlife and humans living in harmony. WCS is committed to this mission because it is essential to the integrity of life on Earth.