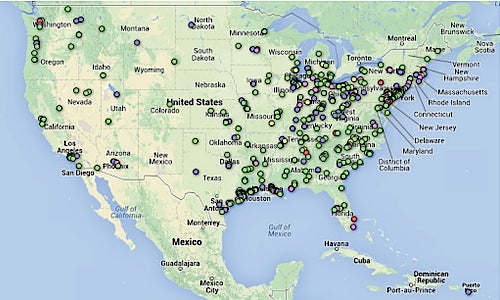 Recent spills in West Virginia and North Carolina cast a spotlight on toxic hazards in our midst. But as bad as they are, these acute incidents pale in scope compared to the chronic flow of hazardous chemicals coursing through our lives each day with little notice and minimal regulation.

A new report by Environmental Defense Fund (EDF), Toxics Across America, tallies billions of pounds of chemicals in the American marketplace that are known or strongly suspected to cause increasingly common disorders, including certain cancers, developmental disabilities and infertility.

While it’s no secret that modern society consumes huge amounts of chemicals, many of them dangerous, it is surprisingly difficult to get a handle on the actual numbers. And under current law it’s harder still to find out where and how these substances are used, though we know enough to establish that a sizeable share of them end up in one form or another in the places where we live and work.

The new report looks at 120 chemicals that have been identified by multiple federal, state and international officials as known or suspected health hazards. Using the latest—albeit limited—data collected by the U.S. Environmental Protection Agency (EPA), the report identifies which of these chemicals are in commerce in the U.S.; in what amounts they are being made; which companies are producing or importing them; where they are being produced or imported; and how they are being used. An interactive online map accompanying the report lets the user access the report’s data and search by chemical, by company, by state and by site location. An image of the interactive, searchable map of the U.S., showing sites of production or import of the MTS List chemicals. One additional site in Hawaii is not shown. The dot colors reflect the number of MTS List chemicals reported at each site. Click on image to access the map.

The interactive map shows these chemicals are produced or imported in all parts of the country, in 45 states as well as the Virgin Islands. Companies with sites in Texas, Pennsylvania, New Jersey and New York reported producing or importing at least 40 listed chemicals.

While the report shows how deeply toxic chemicals are embedded in U.S. commerce, the chemicals identified represent just part of the story. Companies making or importing up to 12-and-a-half tons of a chemical at a given site do not need to report at all. Others claim their chemical data is confidential business information, masking it from public disclosure. The EPA only collects the data every four years, and chemical companies often don’t know and aren’t required to find out where or how the chemicals they make are being used. 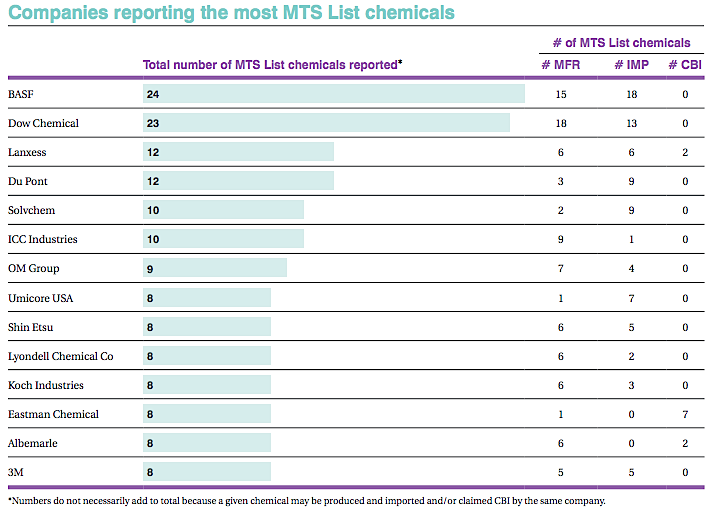 Most Americans assume that somebody is regulating these chemicals to make sure we’re safe.  In fact, thanks to gaping loopholes in federal law, officials are virtually powerless to limit even chemicals—such as those featured in the report—we know or have good reason to suspect are dangerous. Because none of us has the power to avoid them on our own, we need stronger safeguards that protect us from the biggest risks and give companies that use these chemicals a reason to look for better alternatives.

The good news is that Congress is working on bipartisan legislation that—if done right—would require greater evidence of safety for both chemicals already in use and new chemicals before they enter the market.  And by driving development of and access to more chemical safety data, it would give not only government but also product makers and consumers much more of the information they need to identify and avoid dangerous chemicals, and strengthen incentives to develop safer alternatives.

Is Your State One of the 33 Taking Action on Toxic Chemicals?

Cancer Caused by Toxic Chemicals ‘Grossly Underestimated’ in the U.S.