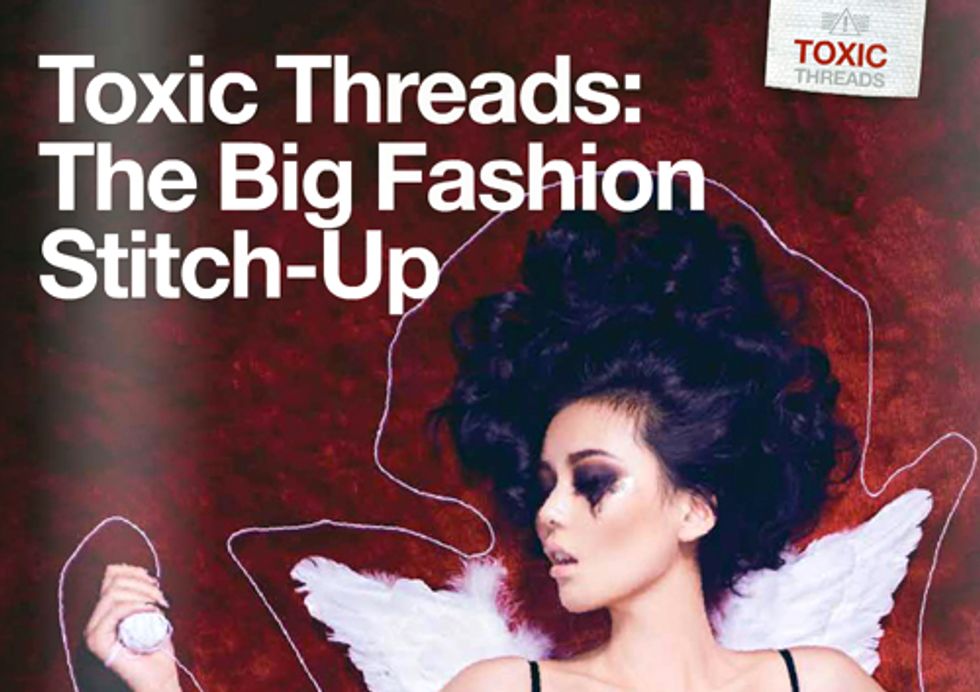 Greenpeace investigations found hazardous chemicals in clothing from 20 leading fashion brands1, while fashion retailer Zara is alone in the study for having clothes that can give rise to both chemicals that are hormone-disrupting or cancer causing.2

"Major fashion brands are turning us all into fashion victims by selling us clothes that contain hazardous chemicals that contribute to toxic water pollution around the world, both when they are made and washed," said Yifang Li, senior toxics campaigner at Greenpeace East Asia.

One of the key findings is that all tested brands had at least several items containing NPEs, which break down into hormone disrupting chemicals, with the highest concentrations—above 1,000 ppm—in clothing items from Zara, Metersbonwe, Levi’s, C&A, Mango, Calvin Klein, Jack & Jones and Marks & Spencer (M&S). Other chemicals identified included high levels of toxic phthalates in four of the products, and traces of a cancer-causing amine from the use of cert ain azo dyes3 in two products from Zara. The presence many other types of potentially hazardous industrial chemicals were found across many of the items tested.

"Some of the Zara items tested came out positive for substances that break down to form cancer-causing or hormone-disrupting chemicals which is unacceptable for both consumers and the people living near the factories where these clothes are made. How can Zara be sure that more of its clothing lines are not contaminated with these hazardous chemicals?” said Martin Hojsik, detox campaign coordinator at Greenpeace International.

“As the world’s largest clothing retailer, Zara needs to take the lead and take urgent, ambitious and transparent action to Detox their clothes and supply chains,” Hojsik said.

The items tested were manufactured mainly in the Global South, and included jeans, trousers, t-shirts, dresses and underwear designed for men, women and children and made from both artificial and natural fibres. Hazardous chemicals are both incorporated deliberately within the materials or left as unwanted residues remaining from their use during the manufacturing process.

“The textile industry continues to treat public waterways as little more than their private sewers. But our fashion doesn’t have to cost the earth: Our clothes don't have to be manufactured with hazardous chemicals,” said Yifang Li, Detox campaigner at Greenpeace East Asia.

Greenpeace demands fashion brands commit to zero discharge of all hazardous chemicals by 2020—as brands including H&M and M&S have already done—and require their suppliers to disclose all releases of toxic chemicals from their facilities to communities at the site of water pollution.

2Amines are used in the manufacture of azo dyes and can be released when the dyes are chemically broken down. Some amines (that come from the breakdown of certain dyes) are carcinogenic. Phthalates were found in all 31 items that were tested: high levels in 4, and traces in the other 27. Nonylphenol ethoxylates (NPEs) were identified across all brands. Some phthalates, and chemicals released when nonylphenol ethoxylates (NPEs) break down (in water treatment plants or in rivers), are hormone-disrupting chemicals. Some phthalates are toxic to the reproductive system.

3The release of amines were detected in two of the articles, above the detection limit of 5 ppm; both products were manufactured in Pakistan for Zara and sold in either Lebanon or Hungary.