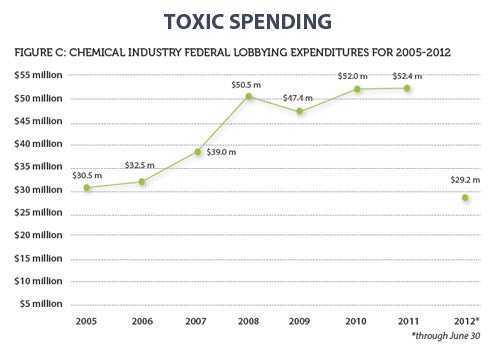 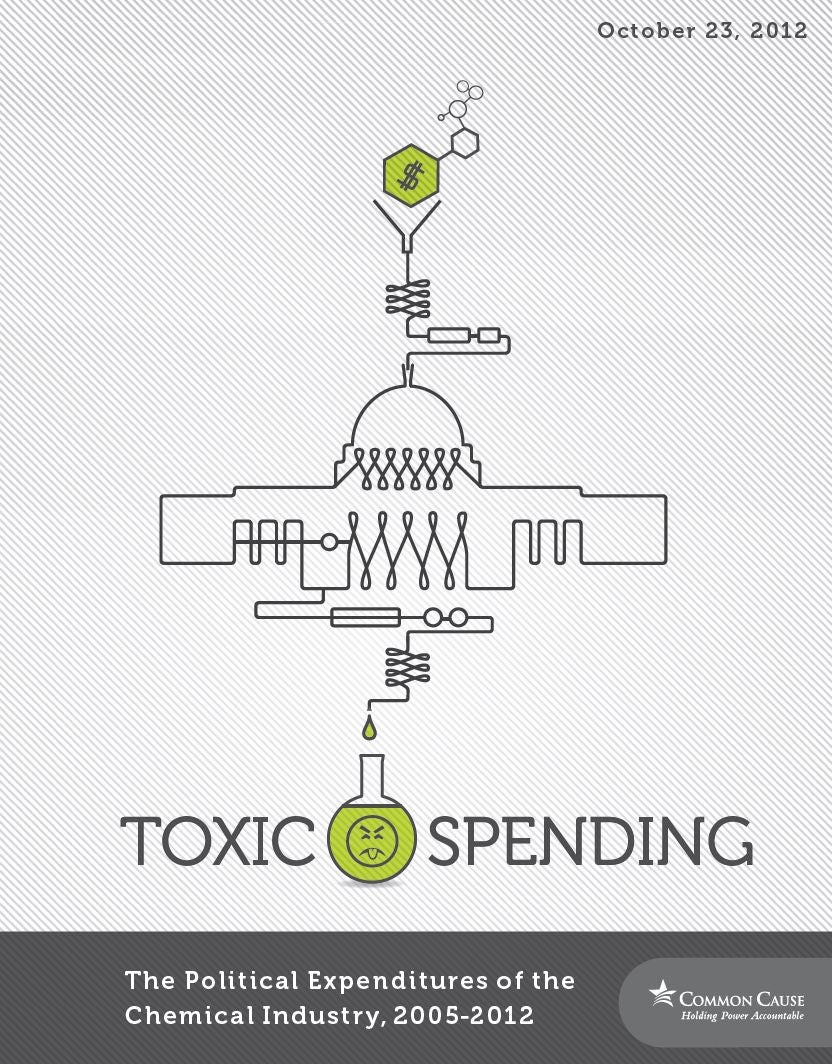 Determined to block efforts to strengthen the 36-year-old Toxic Substances Control Act, chemical interests have invested $375 million since 2005 to elect and influence industry-friendly political leaders, Common Cause said in a report released today.

“The dimensions of chemical industry spending documented in this study, Toxic Spending, are staggering,” said James Browning, Common Cause’s regional director for state operations and a principal author of the report. “By following the money, we see how and why the industry has been so successful in blocking attempts to strengthen the Toxic Substances Control Act.”

In the current campaign, the industry has capitalized on the Supreme Court’s controversial Citizens United decision by putting $23 million into “Super PACs,” supporting its favored candidates or opposing its adversaries, according  to the study. In addition, chemical interests have spent an additional $2.8 million on their own political advertising.

In Citizens United v. Federal Election Commission, decided in 2010, the Supreme Court cleared the way for corporations and unions to invest unlimited sums on political advertising. Corporate and union contributions to candidates remain illegal, but the ruling has triggered a flood of ads produced and paid for by corporate, union and individual donations to Super PACs that are aligned with candidates but operate independently.

The study details how chemical firms and their executives direct much of their political spending and lobbying toward members of Congress who are positioned to look out for industry interests. The industry has spent $333 million on lobbying since 2005; in the current campaign alone, for example, individuals and political action groups tied to chemical firms have given House Speaker John Boehner, an Ohio Republican, nearly $128,000 and invested an additional $78,800 in House Majority Leader Eric Cantor of Virginia.

Other major recipients of industry support include Rep. Fred Upton, R-MI, the chairman of the House Energy and Commerce Committee, who has collected $80,100 in campaign contributions and benefited from just over $200,000 in industry advertising; and Rep. Gene Green, D-TX, the senior Democrat on the House subcommittee that handles legislation dealing with chemical policy. Green’s campaign has collected $50,100 from chemical interests this year and benefited from nearly $331,000 in industry advertising. 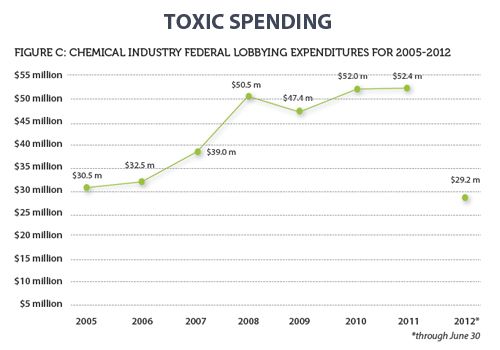 Browning said the report likely understates the industry’s spending totals on political advertising. Disclosure requirements put in place by the Federal Communications Commission cover only television stations serving the nation’s 50 largest markets, he noted, and do not cover ads purchased on cable channels. Donors also can bypass disclosure requirements by funneling their money into tax-exempt “social welfare” organizations that are able to buy political ads but are not required to disclose their donors.

The report recommends strengthening disclosure requirements on industry political spending and says that spending should be permitted only if approved by shareholders. It also calls on the Federal Communications Commission to create a national database of ad expenditures that covers all stations and allows searches by geographic region, ads run for or against particular candidates and by entities purchasing ads. The agency’s current records are organized station-by-station, so a researcher looking to document industry activity must sort through hundreds of records one by one.