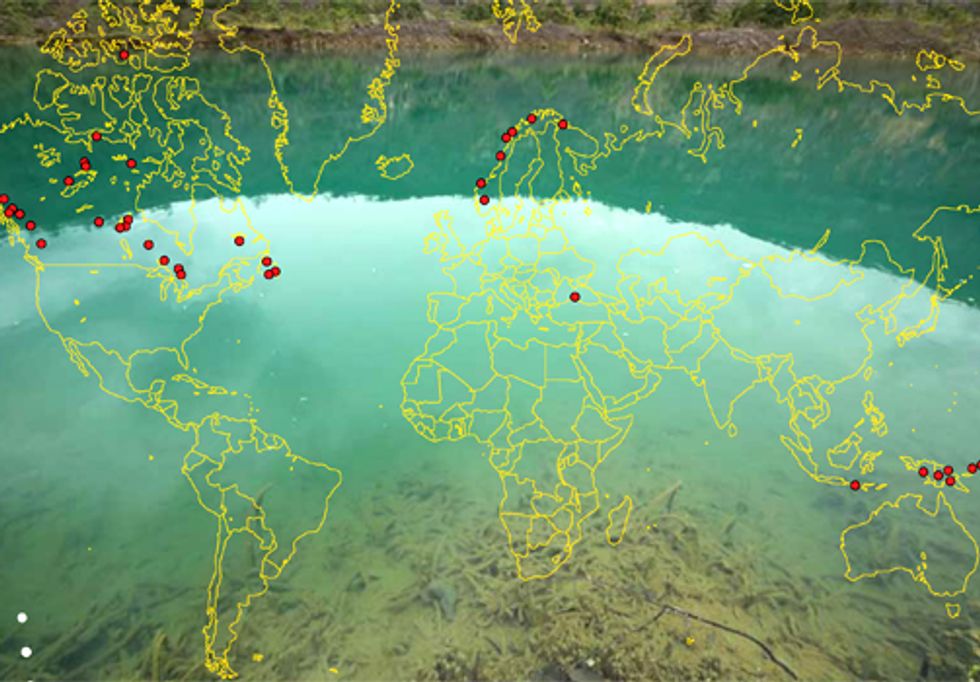 Each year, mining companies dump more than 180 million tonnes of hazardous mine waste into rivers, lakes, and oceans worldwide, threatening vital bodies of water with toxic heavy metals and other chemicals poisonous to humans and wildlife, according to report released on Feb. 28 by two leading mining reform groups.

An investigation by Earthworks and MiningWatch Canada identifies the world’s waters that are suffering the greatest harm or at greatest risk from the dumping of mine waste. The report, Troubled Waters: How Mine Waste Dumping is Poisoning our Oceans, Rivers, and Lakes, also names the leading companies that continue to use this irresponsible method of disposal.

Mine processing wastes, or tailings, can contain as many as three dozen dangerous chemicals including arsenic, lead, mercury, and cyanide. The report found that the mining industry has left mountains of such waste from Alaska and Canada to Norway and Southeast Asia.

“Polluting the world’s waters with mine tailings is unconscionable, and damage it causes is largely irreversible,” said Payal Sampat, international program director for Washington, D.C.-based Earthworks. “Mining companies must stop using our oceans, rivers, and lakes as dumping grounds for their toxic waste.”

The report says some multinational mining companies are guilty of a double standard.

“Some companies dump their mining wastes into the oceans of other countries, even though their home countries have bans or restrictions against it,” said Catherine Coumans, research coordinator for Ottawa-based MiningWatch Canada. “We found that of the world’s largest mining companies, only one has policies against dumping in rivers and oceans, and none against dumping in lakes.”

There are safer methods of disposing of mine tailings, including returning the waste to the emptied mine. In other places, dumping of any kind is too risky. No feasible technology exists to remove and treat mine tailings from oceans; even partial cleanup of tailings dumped into rivers or lakes is prohibitively expensive.

“We are really suffering because of the millions of tons of mine waste that Barrick Gold dumps in and around our river system every year,” said Mark Ekepa, chairman of the Porgera Landowners’ Association. “Our rivers run red, our houses have become unstable, we have lost fresh drinking water and places to put our food gardens, and sometimes children get carried away by the waste.”

A number of nations, including the U.S., Canada, and Australia, have had restrictions on dumping mine tailings in natural bodies of water. Even these national regulations, however, are being eroded by amendments, exemptions, and loopholes that allow destructive dumping in lakes and streams. Even though U.S. law long banned lake dumping, in 2009 the U.S. Supreme Court allowed Coeur D’Alene Mines of Idaho to dump 7 million tonnes of tailings from the Kensington Gold Mine in Alaska into Lower Slate Lake, filling the lake and destroying all life in it.

In Canada, Taseko Mines Ltd. is proposing to reclassify Little Fish Lake and Fish Creek in British Columbia as a tailings impoundment for its proposed Prosperity Gold-Copper Mine. The watershed is home to grizzly bear and highly productive rainbow trout, and is an important cultural area for the Tsilhqot’in People. After being refused environmental approvals for the past 17 years, the company has re-applied with plans to build a tailings impoundment to dispose of 480 million tons of tailings and 240 million tons of waste rock in the basin of the creek and lake, burying the ecosystems under a hundred meters of waste.