A company with a history of failing to report hazardous material spills is set to expand its Central Valley, CA, toxic waste dump, to the dismay of low-income communities already plagued with concern over proximity to the operation. 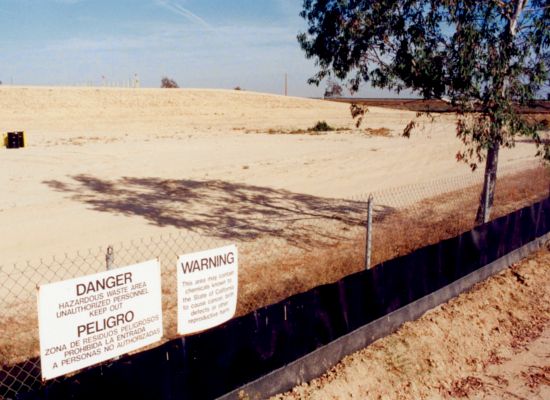 A draft permit for the expansion of Chemical Waste Management’s Kettleman City toxic waste dump would expand the site by 50 percent, or 5 million cubic yards, according to the Los Angeles Times.

The toxic dump, considered the largest west of the Mississippi River, has been the subject of debate among local residents after it was fined in March for failing to report more than 70 toxic waste spills to California Department of Toxic Substances Control (DTSC)—a charge the company claims is irrelevant to its quest for expansion.

The toxic site borders what Greenaction describes as a low-income, predominantly Spanish-speaking community with a population of 1,500. According to the organization, those who have attempted to speak up against the expansion have been met by police-led intimidation at public hearings held only in English.

At the same time Central Valley that residents are fighting the proposed Chemical Waste Management expansion, the Exide Technologies battery recycling plant in Vernon, CA—nearly three hours north—is poised to reopen. The Exide plant, which was closed for alleged arsenic emissions and soil contamination, is also located in a predominantly low-income area.

“We’re considered a lot more disposable than people in communities like Napa or Beverly Hills,” Maricela Mares-Alatorre, who lives near the Kettleman City plant, told the LA Times.

In March, Chemical Waste Management was ordered to pay more than $300,000 in fines after it was discovered that it did not report 72 hazardous material spills over four years, according to the California DTSC.

The department said the spills occurred near a loading area and sampling facility. The spills included herbicides, lead-contaminated soil and other chemicals, according to a press release. Area residents point to these violations as potential causes of illness and fetal deformities.

Under California law, the company was supposed to verbally notify the department of the spill within 24 hours of the incident. Written notice is supposed to be given within 10 days.

Chemical Waste Management failed to do this 72 times. The company claims it cleaned up all spills and considered them to be too small to report.

The fine was imposed after a negotiating process between the DTSC and the company. According to the LA Times, the plant is the only one of its kind in California allowed to store polychlorinated biphenyls, otherwise known as PCBs, a known carcinogen.

“Our job is to ensure that facilities operate in compliance with the hazardous waste control laws and to hold them accountable when they don’t,” Brian Johnson, the department’s deputy director of enforcement, said in a press release. “This is a significant fine that underscores our commitment and sends a clear message to communities that DTSC will protect violations of the hazardous waste control laws.”

Yet local residents see the $300,000 fine as little more than a slap on the wrist for the company, which is now poised to expand its facility by 50 percent.

“It’s an insult to the rule of law that will send a message to polluters that … it doesn’t matter how many times you violate the law, the state will protect you and not protect the people in communities,” Greenation Executive Director Bradley Angel told the LA Times.

The draft permit is expected to be approved in September.

Yet before that happens, area residents are making their voice known, urging the Environmental Protection Agency and the DTSC to deny the permit completely, citing “chronic violations by the company, the ongoing health crisis including birth defects, miscarriages and childhood cancer, and the racial discrimination in the permit process including denying Spanish-speakers equal opportunity to participate in the process and the use of police dogs and police intimidation in the public hearings.”

Meanwhile, in Vernon, Californians are fighting a similar battle.

In April, the California Department of Toxic Substances Control suspended the permit for the Exide Technologies battery recycling plant, which recycles roughly 40,000 batteries each day. The state agency cited faulty pipelines and soil and groundwater contamination.

“A recent report submitted to the department by Exide demonstrate that the facility is operating its underground storm sewer pipeline in violation of hazardous waste requirements and are causing releases to the environment,” the order for temporary suspension states. “A separate report submitted to the South Coast Air Quality Management District by Exide demonstrates that emissions from the facility operations pose a significant risk to the surrounding community.”

According to the DTSC, a report on March 5 indicated degraded and compromised underground pipelines, which were the sources of hazardous metals released into the soil and groundwater near the facility. According to the report, groundwater in the area was contaminated at a level exceeding regulations. In addition, the report indicates the facility’s furnace was emitting arsenic pollutants, impacting more than 100,000 people.

“The predominant contributor to both chronic and acute cancer risk and noncancer hazard is arsenic emissions from the facility, with the primary human organs that are harmed are the cardiovascular system, central nervous system, developmental system, respiratory system and skin,” the report states.

The suspension of the plant’s permit was seen as somewhat of a victory for those living in the area—until it was overridden.

Exide challenged the DTSC order, filing for an appeal hearing. Yet after it was determined that the process was not as efficient as the company would like, Exide took its matter to court, filing for bankruptcy protection.

According to California Public Radio, Judge Luis Lavin determined that Exide would be “irreparably harmed” by the slow hearing process, granting the company the right to once again begin operations. Lavin claimed that doing so would not put the public at risk. Clearly, this was a controversial move.

Lavin claims that Exide had proven its ability to reduce arsenic emission levels, doing so by 97 percent before the plant was set to close, according to the LA Times. Taking the issue a step in a different direction, the judge accused the DTSC of filing the suspension based on knee-jerk reactions.

“The department’s avalanche of conclusions, speculation and innuendo are not a substitute for evidence,” the judge wrote in his ruling, according to the Times.

The company will still be subject to an administrative hearing, tentatively scheduled for September—the same time residents of Central Valley will discover whether they need to brace for the expansion of a toxic dump in their own backyards.