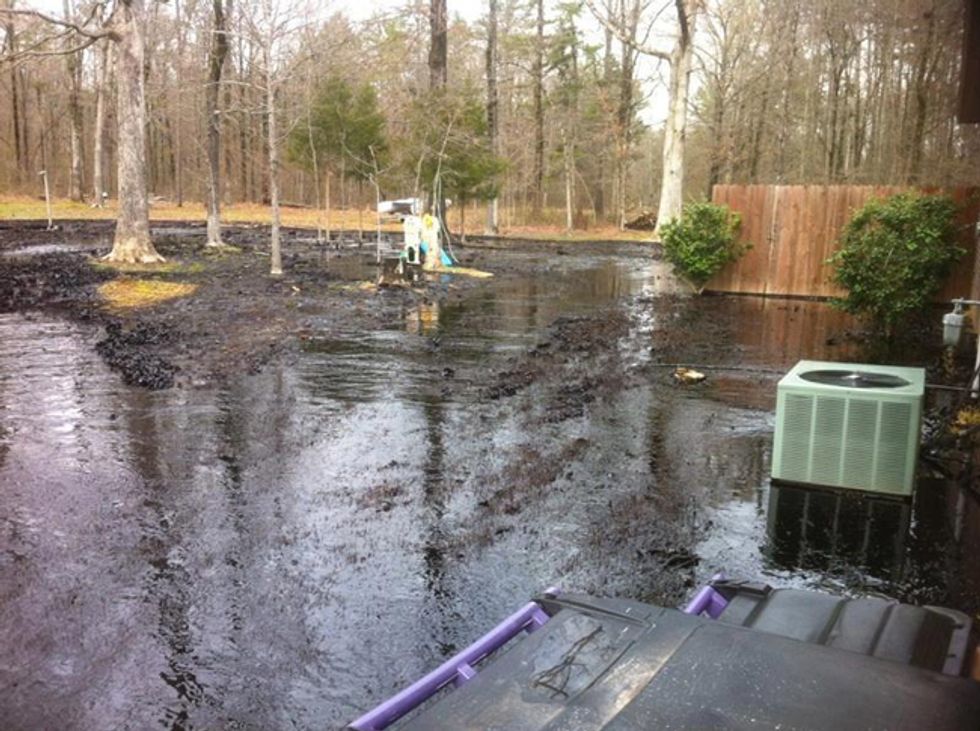 As the Obama Administration continues to ponder a decision on the Keystone XL pipeline, TransCanada has been assuring everyone of it’s safety. “Safety of the public and the environment is a top priority for TransCanada” their slick website reads. Any spill is deemed “unlikely.”

Hardly. Last year, there were 364 spills from pipelines that released about 54,000 barrels of oil and refined products. In 2010 in Marshall, Michigan an Enbridge pipeline sent 819,000 gallons of toxic tar sands crude into the town’s creek just 80 river miles from Lake Michigan. Now in Mayflower, Ark., 22 homes have been evacuated this week as Exxon prepares to attempt to clean 10,000 barrels of this same dirty tar sands crude from neighborhoods.

A residents backyard in Mayflower, Ark., after an Exxon Mobil pipeline ruptured on March 29, spilling an estimated 84,000 gallons of heavy crude oil from the Canadian tar sands region.

The experiences of people of Marshall, Michigan may shed light on what the citizens of Mayflower, Arkansas may now be in for.

On July 26, 2010, at 7:30 a.m., Marshall resident Susan Connolly dropped off her children at daycare. That Michigan morning there was a strong smell in the air, making it hard to breathe. By the time she picked up her children just a few hours later, the symptoms had started.

That night her son vomited. The week following, her daughter had a rash, as did almost all the children at the daycare. The other children also reported cases of vomiting, upset stomach, shortness of breath, lethargy, headaches, rash, irritation with the eyes, sore throat and cough. Meanwhile, Connolly and her husband experienced migraines, eye irritation, sore throat, nausea and cough. Just six days later, their dog came in from the yard suffering from continuous vomiting and diarrhea.

They quickly learned that this was all related to a broken Enbridge pipe, spilling bitumen ooze into the water just  6/10ths of a mile from their children’s day care and just two miles from their home. Bitumen is a thick, sticky, black semi-solid form of petroleum. It is transported from Alberta Canada as diluted bitumen (dilbit) on its way to refineries in the U.S.

“I’m a parent and I see the children and the staff of this center who have been affected by this spill,” says Connolly. “Three months after the spill, four parents withdrew six children from the center due to their concern of their short-term health effects of their children. They were concerned about the smell, air quality, and potential long-term effects. An employee who has been with the child care center since it opened, who helped them build it from the ground up, left the center because she has been sick since the day of the spill.”

Their concern is understandable. The U.S. Environmental Protection Agency established that there were 15 parts per billion of benzene in the atmosphere in the region of the spill, which is roughly three times the standard established as safe for human exposure.

Connolly reports that “the argument made by Enbridge is: you cannot prove that the spill may be the cause. Well, my response as a parent is you can’t prove that it’s not … I’m not anti-pipeline, but I am an advocate for safety. You need to know the health impacts. There will be another spill, it’s not an if, it’s a when.”

Connolly’s story highlights the clear effects of the revolving door of money from politicians and fossil fuel companies keeping the safety standards and oversight low. In 2009 and 2010 fossil fuel companies like Enbridge spent $25.8 million lobbying Congress and in return they received subsidies and tax loopholes worth $20.5 billion. That’s a 5,800 percent return on political investment; about $59 in return for each dollar they spend lobbying.

Connolly sees the influence fossil fuel companies have on Washington, DC, firsthand. She asks, “Who do you think [government officials] are looking out for more? Corporations or the people?”

Companies that transport oil are required to pay into the Oil Spill Liability Trust Fund, giving the government a pot of money for immediate spill responses. The Enbridge pipeline in Michigan and the Exxon pipeline in Arkansas, however, are exempt because these pipelines are not considered to be carrying “conventional oil,” despite the fact bitumen spills are more expensive and more dangerous.

In a January 2011 memorandum, the IRS determined that to generate revenues for the oil spill trust fund, Congress only intended to tax conventional crude, and not tar sands or other unconventional oils. This exemption remains to this day, even though the U.S. moves billions of gallons of tar sands crude through its pipeline system every year. The trust fund is liable for tar sands oil spill cleanups without collecting any revenue from tar sands transport. If the fund goes broke,the American taxpayer foots the cleanup bill.

When Connolly learned that Enbridge is not required to pay into the Oil Spill Liability Trust Fund, she was shocked. “I can’t believe that,” she said. “It’s unconscionable, disgusting. I can’t believe it’s not being brought up … [Companies] get enough tax loopholes; they can pay into the system and should not make taxpayers pay for their cleanup.”

Connolly holds that the government needs to hold companies like Enbridge and Exxon accountable. She believes her government representatives should advocate for companies to pay into the Oil Spill Liability Fund and keep discussing the issue. “They’re making a ton of money and they’re calling the shots, but who do they answer to? We’re asking the government to come and look at the impact, but no one comes out. No one looks; no one sees. They think it’s all cleaned up.”

Connolly has just one piece of advice for politicians and Enbridge CEO Al Monaco: “Come back to Michigan; meet with the residents who have concerns and questions. Don’t come just for PR or to hand out checks. Make the time to talk to those involved in pipeline and cleanup. I’m not trying to bash anyone, but we should all learn from it and be better prepared … a spill like this will happen again.”


And indeed it has.