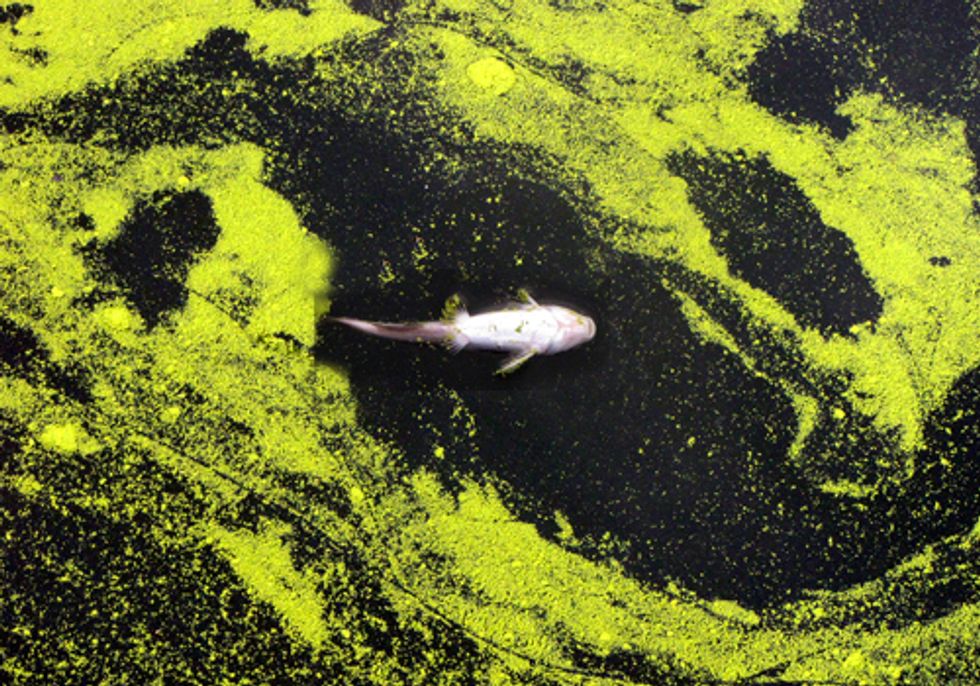 Nutrient enrichment and climate change are posing yet another concern of growing importance—an apparent increase in the toxicity of some algal blooms in freshwater lakes and estuaries around the world, which threatens aquatic organisms, ecosystem health and human drinking water safety.

As this nutrient enrichment, or “eutrophication” increases, so will the proportion of toxin-producing strains of cyanobacteria in harmful algal blooms, scientists said.

Toxic microcystin bacteria float, along with this dead fish, on the surface of freshwater lakes. Photo credit: Oregon State University

Researchers from Oregon State University and the University of North Carolina at Chapel Hill will outline recent findings in an analysis Friday in the journal Science.

Cyanobacteria are some of the oldest microorganisms on Earth, dating back about 3.5 billion years to a time when the planet was void of oxygen and barren of most life. These bacteria are believed to have produced the oxygen that paved the way for terrestrial life to evolve. They are highly adaptive and persistent, researchers say, and today are once again adapting to new conditions in a way that threatens some of the life they originally made possible.

A particular concern is Microcystis sp., a near-ubiquitous cyanobacterium that thrives in warm, nutrient-rich and stagnant waters around the world. Like many cyanobacteria, it can regulate its position in the water column, and often forms green, paint-like scums near the surface.

In a high-light, oxidizing environment, microcystin-producing cyanobacteria have a survival advantage over other forms of cyanobacteria that are not toxic. Over time, they can displace the nontoxic strains, resulting in blooms that are increasingly toxic.

“Cyanobacteria are basically the cockroaches of the aquatic world,” said Timothy Otten, a postdoctoral scholar in the OSU College of Science and College of Agricultural Sciences, whose work has been supported by the National Science Foundation. “They're the uninvited guest that just won't leave.”

A thick mat of toxic microcystins cyanobacteria on Lake Taihu in China gets stirred up in the wake of a boat. Photo credit: Hans Paerl/ University of North Carolina

“When one considers their evolutionary history and the fact that they've persisted even through ice ages and asteroid strikes, it's not surprising they're extremely difficult to remove once they’ve taken hold in a lake,” Otten said. “For the most part, the best we can do is to try to minimize the conditions that favor their proliferation.”

Researchers lack an extensive historical record of bloom events and their associated toxicities to put current observations into a long-term context.  However, Otten said, “If you go looking for toxin-producing cyanobacteria, chances are you won't have to look very long until you find some.”

There are more than 123,000 lakes greater than 10 acres in size spread across the U.S., and based on the last U.S. Environmental Protection Agency's National Lakes Assessment, at least one-third may contain toxin-producing cyanobacteria. Dams, rising temperatures and carbon dioxide concentrations, droughts, and increased runoff of nutrients from urban and agricultural lands are all compounding the problem.

Many large, eutrophic lakes such as Lake Erie are plagued each year by algal blooms so massive that they are visible from outer space. Dogs have died from drinking contaminated water.

Researchers studying cyanobacterial toxins say it’s improbable that their true function was to be toxic, since they actually predate any predators. New research suggests that the potent liver toxin and possible carcinogen, microcystin, has a protective role in cyanobacteria and helps them respond to oxidative stress. This is probably one of the reasons the genes involved in its biosynthesis are so widespread across cyanobacteria and have been retained over millions of years.

Because of their buoyancy and the location of toxins primarily within the cell, exposure risks are greatest near the water's surface, which raises concerns for swimming, boating and other recreational uses.

“Water quality managers have a toolbox of options to mitigate cyanobacteria toxicity issues, assuming they are aware of the problem and compelled to act,” Otten said. “But there are no formal regulations in place on how to respond to bloom events.

“We need to increase public awareness of these issues,” Otten concluded. “With a warming climate, rising carbon dioxide levels, dams on many rivers and overloading of nutrients into our waterways, the magnitude and duration of toxic cyanobacterial blooms is only going to get worse.”